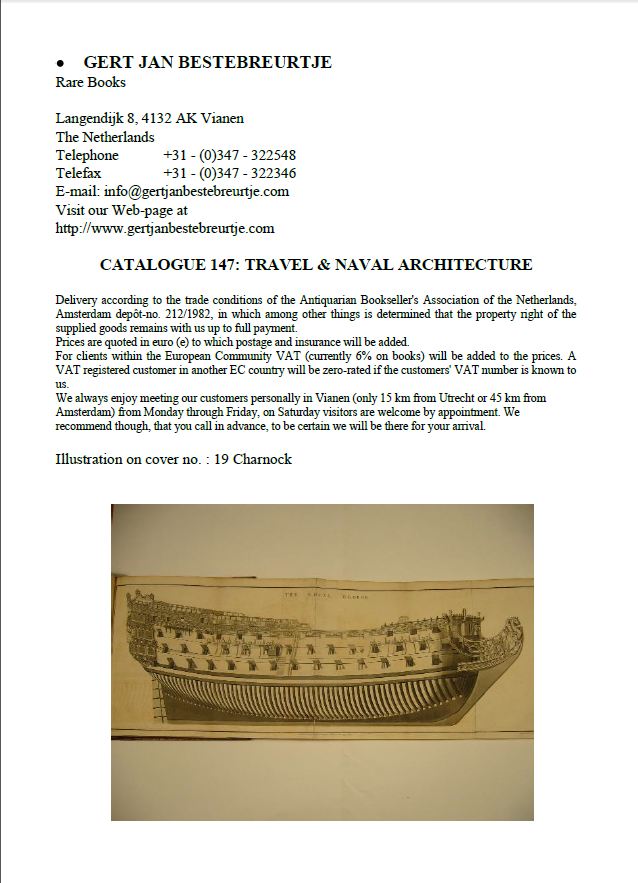 Gert Jan Bestebreurtje Rare Books recently issued Catalogue 147: Travel & Naval Architecture. These are mostly travel books though, as the title says, there is a selection of titles about naval shipbuilding. These travels are mostly of the exploratory variety, those that opened the far reaches of the world to the eyes of Europeans centuries ago. From Europe, they went to Asia and America, the Arctic and Antarctic, Africa and Australia, and numerous islands along the way. For those who collect travels and voyages, this is a catalogue that is worth a look.


The illustration you see on the catalogue's cover comes from John Charnock's An history of marine architecture. It consists of three volumes published 1800-1802. This book was described by Abbey as “The most authoritative book on eightteenth-century ship building published in England.” Item 18. Priced at €3,250 (euros, or approximately US $4,187).


Item 98 is Fram over Polhavet, a first edition of Fridtjof Nansen's expedition toward the North Pole in 1893-1896. Nansen and his crew set off on a journey that required amazing endurance. They headed north with five years worth of supplies, realizing it would likely take many years to achieve their goal. They hoped to ride arctic ice flows up over the pole, but in time realized the flows would not reach their destination. So, Nansen and Hjalmar Johansen set off on foot with 28 dogs and two kayaks, hoping to reach the pole. The terrible conditions prevented their achieving that goal, but Nansen and Johansen reached farther north than any other person up to that date. Returning to the Fram was not possible, but they made their way south, wintering over on some islands, before, in a stroke of dumb luck, they happened upon a British expedition in Franz Josef Land. €275 (US $354).


While the Norwegian Nansen went to explore the north, his fellow Scandinavian, Nils Otto Nordenskjold, went south to Antarctica. This Swedish expedition ran from 1901-1904 and those who participated suffered many hardships. Nordenskjold and his party wintered over on an island, but when their ship, the Antarctic, came to retrieve them, it was crushed in an ice flow. It was not until late 1903 that they were finally rescued by an Argentine ship. Despite the setbacks, the mission was a great success in terms of the scientific information it brought back. Nordenskjold survived this and other dangerous adventures over the course of his life, only to succumb in his home town to being hit by a bus. His book, Antarctic, is named after his ship. Item 101. Published (in Swedish) in 1904. €225 (US $290).


Item 50 is a look at Australia just before the British set off to establish their first penal colony in the land: The History of New Holland, from its Discovery in 1616, to the Present Time. Along with a boatload of prisoners, the continent would soon receive its new name. The book was designed to serve a British audience hungry for information about this land planned to be used for a penal colony at the time this book was published (1787). Along with information about the land and Botany Bay, where the colony was originally to be established, there is an “Introductory discourse on banishment” written by William Eden. Two hand-colored maps show the continent as known at the time. €4,750 (US $6,127).