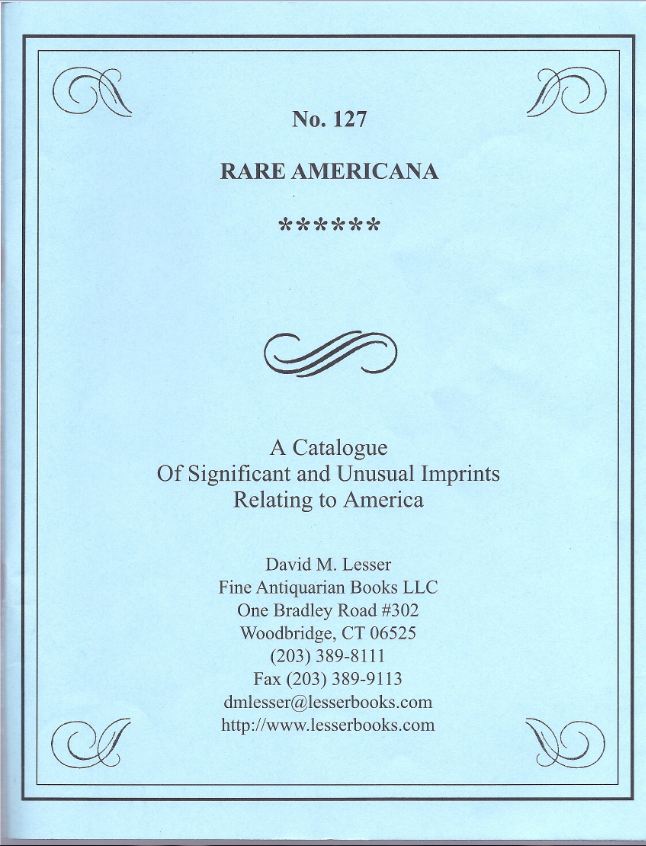 David M. Lesser Fine Antiquarian Books has released their catalogue number 127 of Rare Americana. It offers a mix of books with many pamphlets and ephemeral paper items. The focus is on America in the 18th and 19th century. The heart of this period is between the revolution and Civil War, and naturally, growing divisions between the North and South highlight this era. We get to see America born, unite, divide, and be reunited, all in the space of one catalogue. Here are a few of these works on paper.


Item 144 is an account of a mutiny aboard a U.S. naval vessel, the only such mutiny in American history: Case of the Somers' Mutiny. The ringleader was one Philip Spencer, just 19 years old. Spencer's father was President Tyler's Secretary of War, his grandfather served in various public offices in New York, including a term in Congress. Young Philip was not so responsible. After two unsuccessful attempts at college, he ran off and signed on with a Nantucket whaler. His father, as Secretary of War, got him a better job at sea as a midshipman. Philip continued to get into trouble. He got in a drunken fight and assaulted an officer. He was to be court-martialed, but his father managed to get him a place on the USS Somers instead. It was there that he conspired with a few others to overtake the officers and turn the Somers into a pirate ship. However, one of the men disclosed the plan. Captain Alexander Slidell Mackenzie was not amused. Spencer claimed it was all a joke, but Mackenzie was not convinced. A piece of paper with plans written in Greek was found in Spencer's possession. Mackenzie asked his other officers how they felt he should proceed and they all agreed – hang Spencer. Now, this would seem a bit of a risk since his father was the Secretary of War, but Mackenzie proceeded as recommended anyway. On December 1, 1842, young Spencer and two others were hanged at sea, their bodies consigned to the ocean. When the Somers returned, Mackenzie was held before a Court of Inquiry and later a court-martial. He was exonerated both times, though in the latter case by a split decision. His choice of execution without trial was not popular, and Mackenzie's reputation was damaged, though he remained active in the navy until his death a few years later. This account, from the office of the New York Tribune, was published in 1843. Priced at $275.


Item 11 is An Essay on Slavery and Abolitionism, with Reference to the Duty of American Females, by Catharine Beecher. Ms. Beecher was a leader in the movement to educate young women and one might expect a similar progressive view when it came to slavery. This was not entirely the case, Ms. Beecher being a bit more conservative than one might think. She was not even a suffragist, as would seem likely of one promoting female education, but saw the value of educating women as a way to produce more teachers, who could then prepare young men for the important political duties the nation needed. This essay was a response to Angelina Grimke, the southern-born abolitionist, who sought to gather more support for the cause in the North. Ms. Beecher's position was virtually everyone in the North already believed slavery was evil (dubious) so there was no need to convince them. It was southerners who didn't share this view, so they were the ones that would have to be convinced, but abolitionists were afraid of speaking in the South. She then goes on to criticize noted abolitionists like William Lloyd Garrison for shrill language which she felt was counterproductive. Ms. Beecher was a believer in gradual abolition, though by the time of this essay (1837), the South had firmly rejected any steps in this direction. Catharine's position on slavery was certainly very different from that of her sister, Harriet Beecher Stowe, whose Uncle Tom's Cabin would set off intense disgust over slavery in the North, and play an important role in leading to the regional break that would end in civil war and emancipation of the slaves. $750.