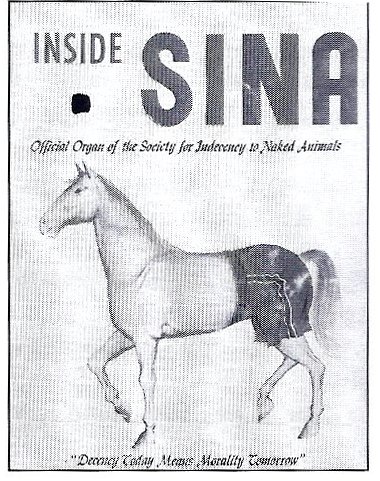 Item 404 is Inside SINA. Official Organ for the Society for Indecency to Naked Animals. The purpose of the society was to clothe naked animals. This may sound ridiculous, and of course it is, but prankster Alan Able managed to have a lot of people fooled, even getting the organization's officials on television. Among the group's mottoes was “a nude horse is a rude horse.” Able began the “organization,” a spoof on censorship, in 1958, but it was still going strong when this booklet was published in 1963. “Decency today means morality tomorrow.” $150.


Item 501 is an important publication from the Commander of the Pacific Fleet from 1952: Whale Intelligence. It's purpose is to aid those at sea in telling the difference between a whale and a submarine. Was this really necessary? Do submarines have fins? Teeth? Blubber? Do whales have periscopes? Engines? Propellers? Sounds like the whales must have had more intelligence than the Commander. $45.


Here's something that sounds really unpleasant: Dr. Jeanne Walter's Famous Medicated Rubber Garments. The idea was that wearing these garments would help you sweat away “superfluous flesh.” Sweating inside of a rubber girdle is not my idea of a good time. This piece was printed circa 1909, and it appears these fine undergarments were sold during the first two decades of the 20th century, but probably not any later. Item 298. $45.


Item 330 is the Report on Red Cross Relief, Galveston, Texas, published in 1901. It comes with a tipped in “Compliments of Clara Barton” slip. The Galveston hurricane of 1900 remains the most costly natural disaster, in terms of life lost, in United States history. An estimated 8,000 people died during the storm and flooding of Galveston Island. $125.