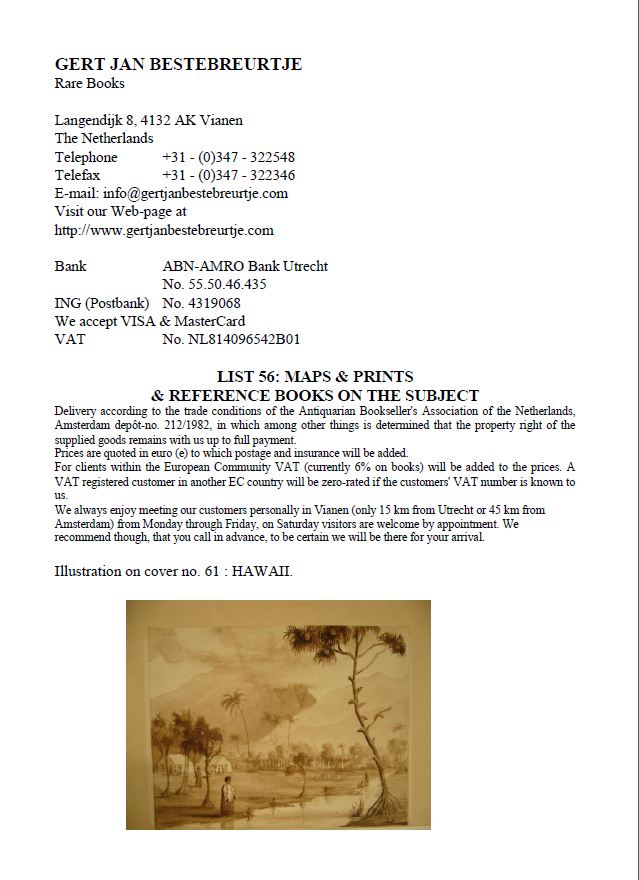 The latest catalogue from Gert Jan Bestebreurtje Rare Books offers Maps & Prints & Reference Books on the Subject. Most of these items are visual pieces, printed images and maps. While many pertain to Dutch history and events, as befitting a Netherlands bookseller, there are a healthy share relating to America and other European lands. This is an interesting selection of material, most of which is suitable for framing. Here are some samples.


Item 2 is a mezzotint of a brave Dutch sailor from the late 19th century. He was the steersman of De Bloeyende Blom, a ship transporting grain from Libau, Latvia, to Amsterdam, when it was overtaken by French privateers operating out of Dunkirk. France and the Netherlands were at war at the time (1794). The privateers took control for two days, but Wiert Adels, the brave sailor, somehow managed to tie four of them up down below. Then, going on top, he found the leader of the pirates and threw him overboard. That enabled Adels to bring the ship back to Holland, where he soon was welcomed as a national hero. The portrait is the work of Charles Howard Hodges, an Englishman who painted in the Netherlands for many years. Priced at €375 (euros, or roughly $469 in U.S. currency).


Item 4 contains a series of illustrations from America's first world's fair. They celebrate The American Centennial Exhibition in Philadelphia. The 1876 fair marked the 100th anniversary of the country's Declaration of Independence. The illustrations came from The Graphic and were published in London (why a celebration of America's independence would be printed in London, of all places, is not clear). Around 10 million visitors are said to have attended the fair. Among the sights illustrated are the elevated railway, band platform, a log cabin, a soda fountain, and a steamboat crossing the Delaware. €225 (US $281).


Not everything about Philadelphia coming out of London was quite so positive. Item 42 is a hand-colored aquatint by Edward W. Clay, published in London circa 1828. Its title is Life in Philadelphia. The purpose was to make fun of the social pretensions of black Philadelphia residents through exaggerated illustrations. In this case, an awkward looking young man greets a young lady with an enormous, flowery hat, who says the hot weather makes her perspire too much. The joke, of course, is the idea that black people would attempt to look like upper class people, that is, whites. €125 (US $156).


Item 111 is a color comic strip-like account of the actions of Jan Carel Josephus van Speijk (or van Speyk). Van Speijk is a hero in the Netherlands for his brave, or perhaps crazy, actions, depending on your point of view. He was a lieutenant in the Dutch Navy in 1831 when his ship was boarded by revolutionary minded Belgians. They ordered the Dutch flag be lowered, something the patriotic Van Speijk could not abide. What exactly Van Speijk did is subject to some doubt, as neither he nor most others survived his action. Supposedly, he said something to the effect of I'd rather the ship be blown up, whereupon he fired his pistol into a barrel of gunpowder which exploded, taking down the ship and killing Van Speijk and most of his comrades. There is some question as to whether he really meant to strike the gunpowder and kill so many people, but this explanation sounded very heroic and patriotic to Dutch ears. The late Van Speijk quickly became a hero to the Dutch, and his, in hindsight, seemingly extreme and unnecessary action has resulted in there being an active ship named after him in the Dutch Navy ever since. Meanwhile, his actions proved for naught as the Belgians succeeded in obtaining their independence anyway. €95 US $119).


Item 20 is a print from 1855 depicting Batavia. De Nederlanders Voor Jacatra. It portrays the Dutch taking of Jacatra, called by the Dutch Batavia, now known as Jakarta, in 1602. That was the year that the Dutch East India Company secured control over much of what is today Indonesia, and ran it as a colony. When that company went bankrupt two centuries later, the Dutch government took control as a colonial power. It continued to rule the land, except for a brief interruption, until the Second World War, when forced out by the Germans. After an unsuccessful attempt to reestablish power after the war, the Netherlands conceded Indonesian independence in 1949. €65 (US $81).