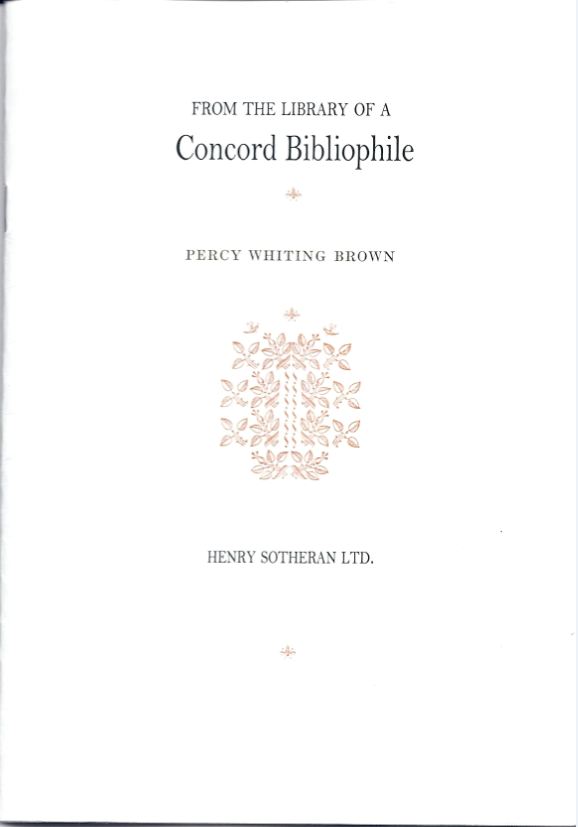 Henry Sotheran Ltd., aka Sotheran's, has issued a catalogue From the Library of a Concord Bibliophile. Sotheran's being from London, you might think this would be a Concord in England, but no, the library belonged to a collector from Concord, Massachusetts, U.S.A. Percy Whiting Brown was the descendant of early Massachusetts settlers. He began work for a financial firm near his home turf in eastern Massachusetts, but after a few years he was sent to Cleveland to open an office. That is where he remained, though his heart, or at least his collecting interests, remained close to Concord. Brown was an active book collector, at one time President of the Rowfant Club. He put together a notable library, including Massachusetts history and English and American literature.


Percy Brown died in 1958 at the age of 71. Most of his library was sold to a bookseller. However, his family kept a few of his books, and it is 18 of those from Brown's collection that are offered by Sotheran's today. These remained in his family until recently when one of his descendants decided to offer them for sale. Here are some of them.


Since Percy Whiting Brown was himself an author, we will start with one of his books. He wrote a number of pieces on his native territory, this one being History of Rowe, Massachusetts. Rowe is a small, rural town in western Massachusetts, and Brown's family built a summer home there when he was young. This 1921 first edition was privately printed, and probably in a small quantity. Several later editions have since been printed as this is regarded as a “standard history” for the little town. Item 12. Priced at £125 (British pounds, or approximately $201 in Yankee dollars).


Item 7 is a book-length poem, a satire from the pen of James Russell Lowell. However, this first edition, released in 1848, was published anonymously, the writing attributed to “a Wonderful Quiz.” Lowell was a poet, though not one of those best remembered now, along with being an essayist, and later in life, American Ambassador to Spain and England. This satire, A Fable for Critics, which was later published under his actual name, is probably his most notable work. It includes rhymes about the works of the great (and not so great) poets of the day. Most descriptions combine the good and the bad of the writer, such as, for Edgar Allen Poe, “There comes Poe with his raven, like Barnaby Rudge, / Three-fifths of him genius and two-fifths sheer fudge.” A review of the then anonymous work Poe wrote in his role as reviewer indicates he was not particularly amused by Lowell's humor. Lowell supported many causes, including abolition, temperance, and women's rights, though these may have been more a reflection of his activist wife's encouragement than very deep convictions. This copy of his fable comes with a check for $119 made out to Lowell and endorsed by him on the back. £495 (US $797).


Here is a book with both a poetic connection and one to Percy Brown's family. Item 2 is The Obligations of Parents to Give their Children a Virtuous Education, and to Provide Schools for this Purpose... This was an 1820 sermon by the Massachusetts clergyman Ezra Ripley. Ripley was a strong believer in education and the role parents played in assuring that was provided to their children. The sermon was delivered on the opening of three new schools. Ripley married the widow of his predecessor at the Concord church, William Emerson, and as such became the step-grandfather of Ralph Waldo Emerson. Emerson admired his step-grandfather and for a time lived with him. This copy is inscribed by Ripley to “John Brown junr.” Rev. Ripley married Percy Brown's great-great-grandparents. John Brown Jr. was Percy Brown's grandfather (without the greats). The book has been in the Brown family since it was presented almost two centuries ago. £1,250 (US $2,012).