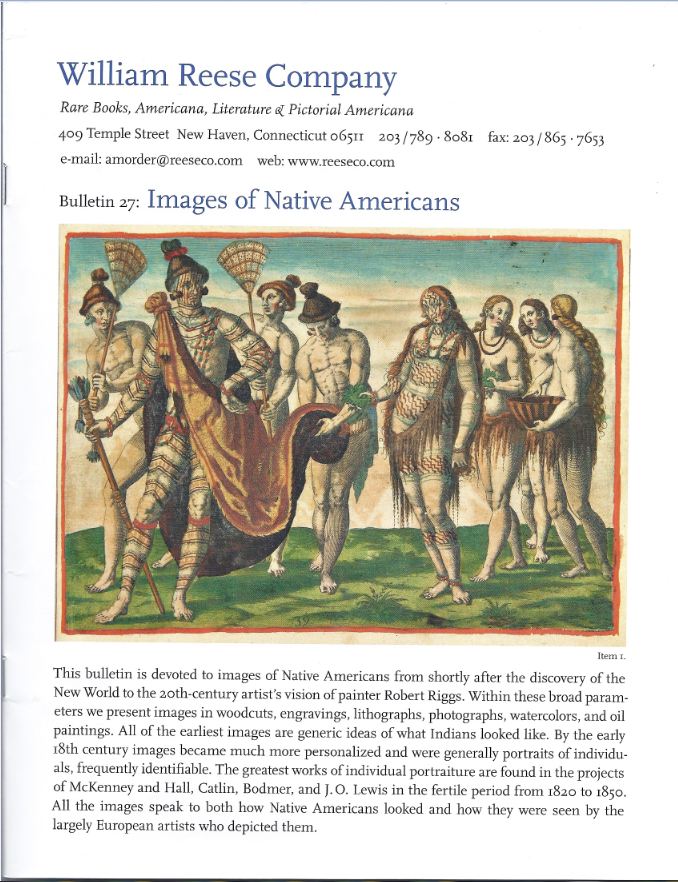 The William Reese Company has issued their Bulletin 27, this one with the title Images of Native Americans. The natives of this New World long fascinated Europe's natives. Their customs, appearance, clothing, were all so strange to a people whose looks and behavior, as we look back from today, were equally odd. This bulletin contains some of the earliest somewhat realistic depictions of American Indians, as seen through European eyes, but at least based on actual observations. From 16th century drawings by early explorers, up to the plethora of illustrations and portfolios created in the 19th century, we have a last look at cultures and lifestyles that rapidly disappeared with advancing settlement. Here, now, are some of these looks at America's Indians as they once were perceived.


Item 3 offers the first reliable images of the New World contained in a book by a man who actually went there - Gonzalo Fernández de Oviedo. Oviedo's work, entitled La Historia General de las Indias, was published from Seville in 1535. Oviedo, who made many trips to America over the course of his life, provides woodcut illustrations of things found in the New World, including botanical specimens such as the prickly pear, and the hammock. He also provides the first illustrations of natives, not exactly those of a skilled artist, but at least a glimpse at the people who inhabited the land. Priced at $225,000.


Item 1 offers a very early look at Florida and its natives, Der Ander Theyl, Der Newloch Erfvndenen Landt-Schafft Americae. This is the 1591 German edition of Theodor De Bry's account of the ill-fated French Huguenot settlement in Florida in the 1560s. The text comes primarily from the expedition's leaders, Jean Ribault and René de Laudonniere. After a decent start, the mission went very bad. Early favorable relations with the Indians turned sour, the settlers began to fight among themselves, and finally they were attacked by the Spanish from St. Augustine, with most of the members wiped out. Among the few who escaped was Jacques Le Moyne, who accompanied the mission as its artist. Forty-two of the 43 illustrations were created by Le Moyne, and they give us a good look at the settlement, botanical specimens, and the local natives. These illustration feature contemporary hand coloring. One of them is featured on the cover of this catalogue (see image above). $300,000.


Item 17 offered the first illustrations of Indians encountered on Lewis and Clark's pioneering expedition to the American Northwest... maybe. Probably not. It is The Travels of Capts. Lewis & Clarke... published in 1809. The public was still awaiting news of this exploration, the official account not yet published (nor would it be for three more years). This work was something of a clever fraud on an anxiously waiting public. Known as the “apocryphal edition,” it was taken from other books and documents, including Patrick Gass' book, President Jefferson's message, and other material, and presented in a way that many believed it to be the official account. Of course, if this were the official report, you would think they would have spelled Clark's name correctly. About the only new piece of significance was the map, created from reports that were out there. It also contains five plates, supposedly of western Indians. Reese was able to trace one of these back to Bartram's Travels, but was not able to determine the origin of the other four. These plates have been described as “fanciful and absurd,” which seems a likely description. $25,000.