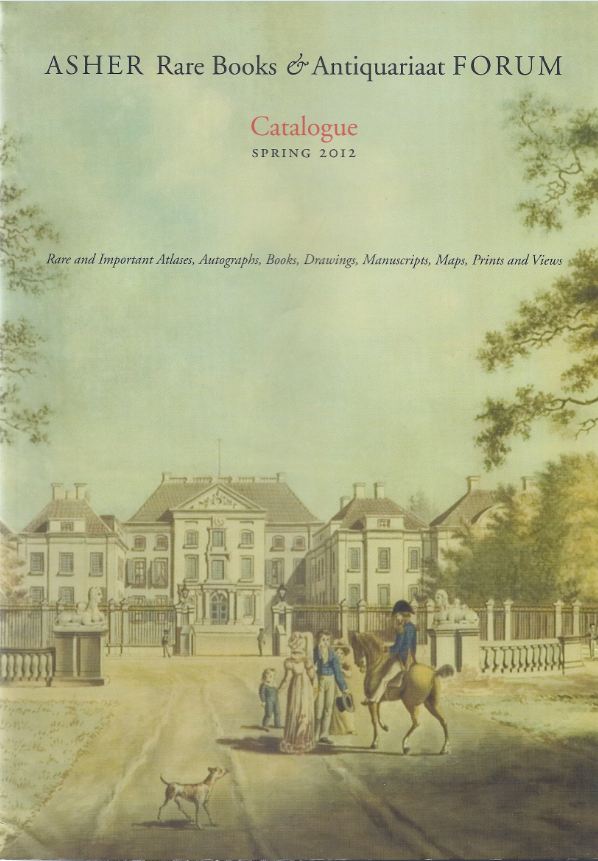 The mail sometimes arrives by slow boat from overseas, which hopefully explains this review of the latest combined catalogue from the Netherlands booksellers Antiquariaat Forum and Asher Rare Books, Catalogue Spring 2012. Or, perhaps it's springtime now in the Eastern Hemisphere? Whatever, this is still a collection of wonderful books pertaining to hemispheres east and west, north and south, and if the catalogue is a bit old, it is not nearly so old as the books within. A few extra months mean nothing to them. Here are some of the antiquarian and rare books you will find in this latest combined offering.


The 18th century German Jesuit Jakob Baegert understood something about California long before the era of smog, traffic jams, and deficits. As Cowan explains, “according to his accounts the country was absolutely unfit for habitation; it was inhabited by wild and ferocious beasts; peopled by cruel and inhospitable savages; water was unfit to use; wood was scarce; and the soil would not sustain life.” The more things change... In fairness to the Golden State, Baegert was a visitor to what is now known as Baja California, south of the American border. His book, published in 1772, is entitled Nachrichten von der amerikanischen Halbinsel Californien. One chapter is devoted to the Waicuri language of the natives. Item 9. Priced at €9,500 (euros, or about $11,717).


Lots of Americans obviously never read Baegert's book and emigrated to California anyway in the next century. Many followed the path of the Humboldt River to reach California, traversing the deserts of Nevada. However, the Humboldt River itself wanted nothing to do with California, simply ending in a sink before reaching the border. Anyway, the river was named for the German explorer Alexander von Humboldt. Perhaps not as well known in America is that Humboldt was also an expert on mines, once managing a mine. Item 96 is his 1799 study of gasses in mines, safety lamps, and mine rescue, Ueber die unterirdischen Gasarten und die Mittel ihren Nachthiel zu vermindern, published in 1799. Humboldt had personally tested some of his rescue equipment for miners in danger of asphyxiation, despite the risk. €2,950 ($3,638).


Bad, even corrupt, governors are nothing new, but Petrus Vuyst must have been just about the worst ever known. A rising star in the Dutch East India Company, primarily through his wife's connections, he was appointed Governor of Ceylon in 1726. His three-year rule was one of terror and tyranny. He quickly replaced those who crossed him, then put them on trial, serving as judge and jury, and ultimately, executioner. He would torture people to force confessions, and was eventually convicted of sending 19 innocent persons to their deaths. Not content with just executing those he did not like, he tortured some, breaking their bones, tearing flesh off their bodies, and pouring hot wax in open wounds. Word got back slowly to officials in Batavia, but in 1729, a successor was sent to Ceylon, Vuyst was arrested, sent to Batavia in chains, and condemned to death. He was executed in a manner fitting his own behavior – drawn and quartered, his body parts burned and dumped in the sea. Item 35 is an account of the sentence handed down to Vuyst in 1732: Sententie...Tegens den Heere en Mr. Petrus Vuyst, Gewezene Gouveneur van Ceylon. €3,500 (US $4,317).


Almost a century and a half before Henry Gray published his famous anatomy, Jean Jacques Manget published his detailed, illustrated Theatrum anatomicum... This is the 1716-17 edition (it was first published in 1714) which included new illustrations among its 136 plates. It is devoted almost entirely to human anatomy, though a brief section and one plate is included on man's best friend. Item 124. €8,000 (US $9,868).