A Miscellany from Kenneth Karmiole, Bookseller 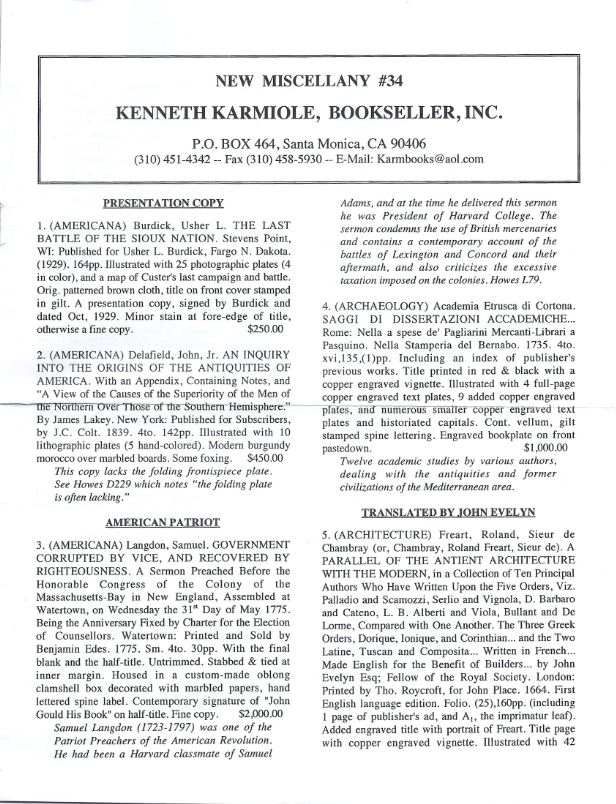 A Miscellany from Kenneth Karmiole, Bookseller

Kenneth Karmiole, Bookseller, has issued New Miscellany #34. There are very old books, as far back as the 15th century, and some as recent as the 1990s. There are works in Latin, as favored in those olden times, but more in English, plus a few other European languages. Topics are too varied to peg. Here are a few samples of the miscellaneous items being offered.


Item 2 has been described as the “first book by a North American on the antiquities of Mexico.” It is An Inquiry into the Origin of the Antiquities of America, by John Delafield, published in 1839, a few years ahead of John Lloyd Stephens' volume. Delafield strays from straight anthropology as he looks to stories of creation and the flood to explain what he found in Latin America. It contains 10 plates, 5 hand colored. The second part of the volume is James Lakey's A View of the Causes of the Superiority of Men of the Northern Over Those of the Southern Hemisphere. Dr. Lakey, quite obviously a Northern Hemisphere man, had a theory that some sort of exhalations from the Earth made not only humans, but animals of the south inferior to those of the north. Priced at $450.


Item 40 is Michaelis Mercati's Metallotheca. Opus Posthuman... a second issue from 1719 (the first was 1717). However, this was long after Mercati's time (he died in 1593). It is a great work on minerals and fossils collected by Pope Sixtus V. Mercati was in charge of the collection formed by Sixtus, an extraordinarily busy man who converted the Vatican's deficits to large surpluses, built great structures, and was politically very active, while also antagonizing many with his high taxes. His active papacy was short, running from 1585-1590. Mercati oversaw this great collection, which was dispersed shortly after Sixtus V's death. However, Mercati did not understand the source of fossils in those days long before Darwin evolved. He concluded they were rocks whose odds shapes were somehow created by the influence of celestial bodies. $7,500.


Here is a book for dog lovers, and I read somewhere that 40% of American households have at least one dog. This is a two-volume set by Edward Ash, published circa 1927, entitled Dogs: Their History and Development. Ash wrote several books about dogs, and as best I can tell, is regarded as one of the greatest writers on the subject. Item 9. $400.


For those with an interest in Baja California, item 73 offers about as thorough a resource for anyplace imaginable. It is a complete set of the Baja California Travel Series published by Dawson's Book Shop. This series was published from 1965-1992, 51 volumes in all. It covers not just travel and exploration, but its history, natural and human, and just about everything else pertaining to this peninsula south of the American border. The volumes were produced in limited runs, ranging from 300-900 copies. $3,000.


Item 28 is Kunst in Schachspiel ein Meister zu Weden, a 1771 third German edition of manuals for the game of chess by Philip Stamma and Francois Philidor. These names may not mean much to the average person, but will be instantly recognizable to the chess aficionado. While there were no official tournaments at the time, Stamma was generally recognized as the greatest chess master around the middle of the 18th century. Philidor would be the man to defeat him, raising his own standing to preeminent chess master. Philidor was known for the sort of amazing feats we now see performed by the greatest of chess players. He would take on such challenges as playing two opponents at once – blindfolded. $750.


Item 94 is a classic study of how society breaks down economically, published over a century ago (1899) by Thorstein Veblin: The Theory of the Leisure Class. Veblin concluded that most of the hard work and contributions to society were not performed by those who were the highest compensated financially. Rather, lower classes did most of the work, while those in the elite, the “leisure class,” received most of the rewards. Those who were most highly compensated would then use their rewards on self-indulgence, often items of what he labeled with a term still used today - “conspicuous consumption.” $1,500.