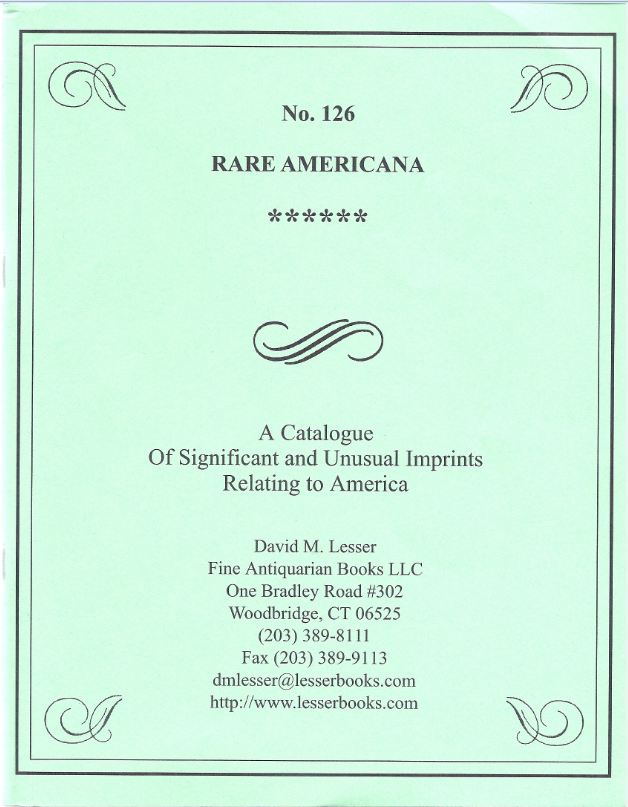 David M. Lesser Fine Antiquarian Books has released their 126th catalogue of Rare Americana. It is filled with selections from America's past we have not seen before. Works primarily range from 18th century colonial times to the late 19th century, the concentration mainly being from the Revolution to Reconstruction. A read through the detailed descriptions Lesser provides will leave you with a better understanding of the times, its debates and controversies, as well as a list of fascinating material to consider. Here are some items from this latest selection.

There were three major social causes in the 19th century that brought similar minds together. The rationale for two is still well understood. Abolition, later civil rights, and women's rights led to major changes in society, their importance as obvious to people today as they were to the minority who supported them early in the 19th century. Less well understood today is the third prong – temperance. Support for this movement was equally as strong and vociferous as it was for the others. Perhaps the ruinous effect of alcohol on poorer people was more obvious in those days. Ultimately, the temperance movement would have its victory with Prohibition, but unlike the other two movements, that victory would be short lived. Item 42 is an example of just how dramatic that support was. Published in 1878, Thomas Doner's appeal is entitled, Eleven Years a Drunkard, or the Life of Thomas Doner. Having Lost Both Arms through Intemperance, He Wrote this Book with his Teeth as a Warning to Others. Doner did not lose his arms by lifting too many glasses of drink, but apparently fell under a train while under the influence of too much alcohol. Priced at $125.


Item 52 is a biting satire directed at the southern branch of the Episcopal Church for its tolerance of slavery. Dated October 1, 1856, and claiming to be issued from Charleston, South Carolina (unlikely anyone would have dared print such a pamphlet in Charleston in 1856), the title is Negroes and Religion. The Episcopal Church at the South. Among the deeply sarcastic suggestions for the church, the author offers, “should not provision be made in cases where a parish church needs repair or enlargement, for raising the necessary funds by the sale of a sufficient number of colored communicants?” Instead of “til death do us part” in marriage vows, he suggests, for black congregants, it be “til death, or my owner, his executors, administrators, or assignees, do us part.” $500.


Item 130, also from 1856, provides a warning to waiters about slow service: An Argument in the Case of the United States Versus Philemon T. Herbert, Tried for the Murder of Thomas Keating... Herbert was an ornery congressman from California, an Alabama native whose alleged disrespect for people of a perceived lesser status would play into public sentiment after he shot and killed the Irish waiter Thomas Keating. Herbert came to breakfast late at the Willard Hotel one morning, ordering Keating to serve him “damn quick.” When Herbert became displeased with Keating's service, he demanded a second waiter be called to attend him. Keating replied that one “servant” was enough, and after some shouting, alleged disparaging comments about Keating's ethnicity, and some throwing of plates, Herbert pulled out a gun and shot Keating to death. The prosecutor, Francis Scott Key's son Philip Barton Key, argued the shooting was in cold blood. Keating claimed he was surrounded by hostile hotel employees and shot Keating in self defense. After a hung jury in the first trial, Herbert was acquitted in the second go 'round. Letting a congressman off the hook for shooting someone would set a tragic, and ironic precedence for Mr. Key, who would himself be shot to death by a congressman in 1859 (for allegedly messing around with his wife, and that Congressman was also acquitted). As for Mr. Herbert, his reputation damaged, he did not seek reelection. Instead, he moved to Texas, joined the Confederate Army during the Civil War, and also died from gunshot wounds, though his were inflicted on the battlefield, rather than the breakfast room. $375.

For men who have trouble understanding women, here is a pamphlet that may help out: Woman Physiologically Considered, as to Mind, Morals, Marriage, Matrimonial Slavery, Infidelity, and Divorce. Author Alexander Walker was a respected physiologist and author in his day, writing a trilogy on women, though much of what he wrote would be considered pseudoscience today. He undoubtedly saw himself complimentary of women, and for his day perhaps he was. His position was that women were possessed of greater instinctive capacities, which made up for their “deficiency of intellectual faculties.” He explained that “love, impregnation, gestation, parturition, lactation and nursing,” which he described as “the principal acts of a woman's life,” are almost entirely instinctive. Perhaps this pamphlet is not such a good way to go about understanding women. Item 177. $175.


In the 19th century, there was much suspicion of secretive fraternal organizations, a belief that they represented a secret, elite group that sought power over regular folks. The Freemasons, with many important members, and very secret rituals, aroused the greatest suspicion. For a while, there was an anti-Mason political party that elected several high officeholders. However, the Odd Fellows, a less exclusive, beneficent organization was not so often a target of these fears. Still, there were exceptions, as expressed in this 1845 (second edition) pamphlet: Odd Fellowship Exposed. It was written by an expelled member of the Exeter, New Hampshire, lodge, who sought his revenge through this pamphlet. Item 117. $375.