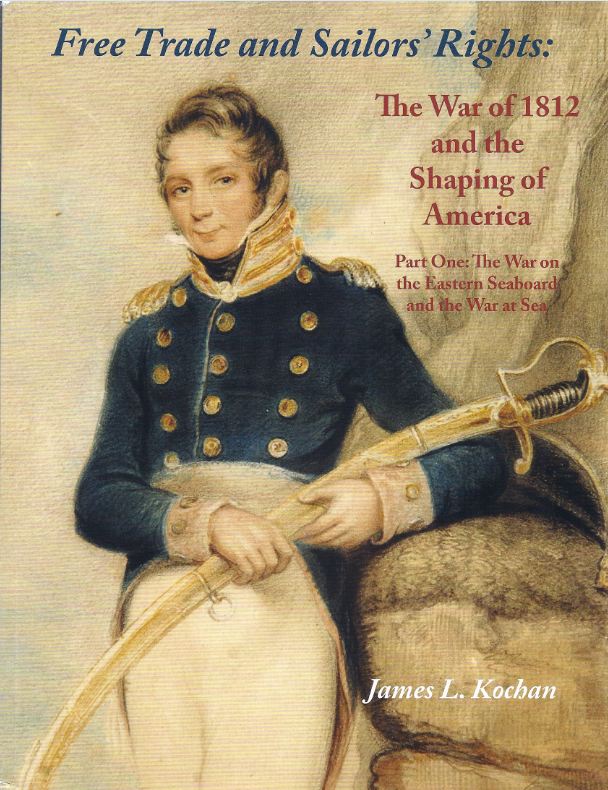 James Kochan Fine Art & Antiques, of Frederick, Maryland, has issued Part One of Free Trade and Sailors' Rights: The War of 1812 and the Shaping of America. This material, principally from Mr. Kochan's personal collection, contains items from the end of the Revolution through the War of 1812, but is concentrated in material pertaining to that later war and the events leading to it. America emerged from its revolution mostly free of the intrigues that consumed Europe at the time, but as the already poor relations between France and England deteriorated, particularly after the French Revolution, it became more and more difficult for the nation to remain uninvolved. Each of those nations engaged in interference with their rival's trade, which meant interference with American shipping. Meanwhile America, as a neutral and uninvolved party, attempted to assert its right to trade freely with whomever it pleased. The United States felt it had justifiable causes to battle either of these countries, but the U.S. was a young and weak nation, ill prepared to take on either European power.


Boycotts, diplomatic protests were of little avail, and internally, the nation was split between those who would go to war with Britain, those who preferred to take on the French, and those who wished to avoid war with either, despite the indignities. Finally, it was the British, with their impressment of American merchant seamen into the Royal Navy, that antagonized the Americans the most, and in 1812, the U.S. went to war with her former colonial ruler. Two years later, the war a stalemate, the two sides agreed to throw in the towel, and the war came to an end. Not much was accomplished on the ground, but America did develop a greater sense of pride and belief in its ability to compete on the world stage, and it would be another century before the country would find itself in another serious war with an external opponent it could not readily overwhelm.


The material offered by James Kochan goes beyond that of print and works on paper, though we will focus on these items. There are muskets, swords, uniforms, hats, pistols, paintings, and such, primarily pertaining to the War of 1812, presented. It is a wonderful collection of material from this extraordinarily important, if now somewhat overlooked period in American history. Here are a few of the more print and paper type of items from this period that was not so much the birth of a nation as the development of one.


We start with the first and earliest piece in the catalogue, which takes us back to the end of America's first war with the British, before it began contemplating its second. It is a discharge notice for Sergeant James Bright, who served with the New York artillery. Bright enlisted in 1776 and served throughout the entire Revolution. As a result, he earned a Badge of Merit for six years of honorable service. It is signed by George Washington, as well as Bright's immediate commanding officer and others. Washington made a point of personally signing the discharge notices of soldiers still in service at the end of the war, in 1783. On the back of the discharge, Bright has signed over the rights to 600 acres of land he was awarded to a land speculator “For Value Rec'd.” Item 1. Priced at $18,000.


The portrait shown on the cover of this catalogue is that of an unidentified field officer probably drawn in 1812-13. The uniform indicates he served in the artillery during the War of 1812. The watercolor has been attributed to the miniaturist Nathaniel Rogers of New York. The fort and harbor in the background indicate a northern port, likely New York. The work features great detail, including the federal eagle and shield on the tiny buttons on the subject's coat. Item 34. $25,000.


Three of the most famous words in British naval history are the unlikely sounding, “Kiss me, Hardy.” Of course, the English will recognize those as the almost last words of the great British Admiral, Lord Nelson, as he lay dying after his glorious victory at the Battle of Trafalgar. The “Hardy” whose final expression of affection he sought was his trusted aid, Thomas Hardy. The latter would go on to have a long naval career in his own right after Nelson's death in 1805. During the War of 1812, he led a blockade off of Long Island. At this time, he wrote this letter to the commanding officer of the Connecticut militia in New London. It requests that enclosed letters be forwarded to the agent for British prisoners of war. Item 27. $3,500.