A Miscellany from Michael Thompson Books 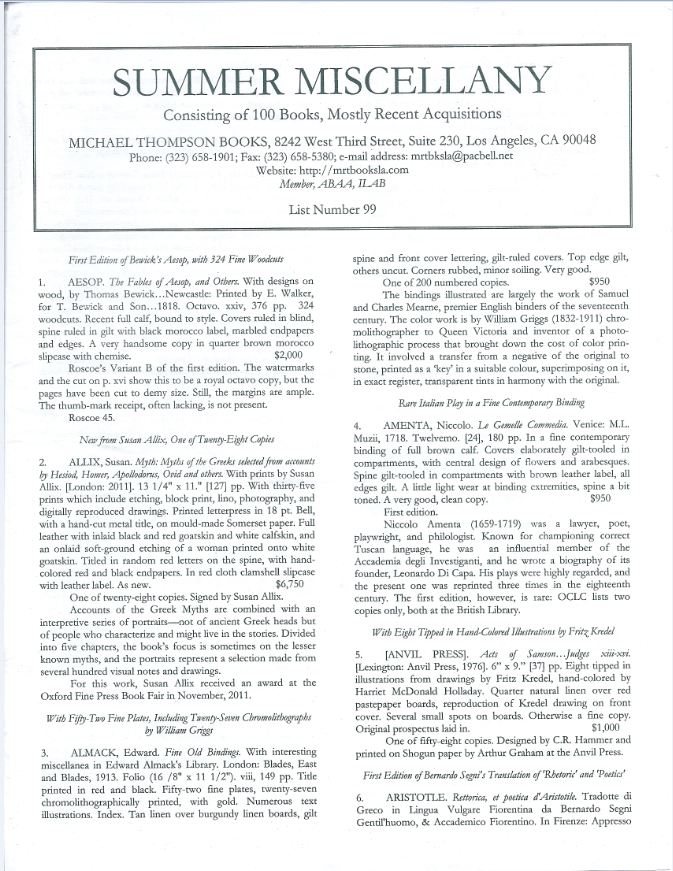 Recently printed is Michael Thompson Books' Summer Miscellany, Consisting of 100 Books, Mostly Recent Acquisitions. I always check Thompson's lists of “100 books” to see how many there actually are. This time it is 99. Next time, it may be 101. Thompson offers a mix of types of material, sort of what you might call a… miscellany. There are very old books with even older texts from antiquity, private and fine press books, scholarly works, advice books for women, travels, and perhaps anything else. You really need to look through one of these collections to know what is there. Here, now, are a few of these miscellaneous items.

Item 36 is the Seventh Annual Report of the Seamen's Aid Society of the City of Boston, published in 1840. The Seamen's Aid Society was a women's organization, which performed various good works on behalf of those who worked at sea and their families. They ran a clothing store and hotel for mariners and a school for their daughters. The first eight of these annual reports were written by the society's president, Sarah Hale. However, you probably don't remember her for all of these good works she did. What you do remember is the nursery rhyme she wrote, Mary Had a Little Lamb. Priced at $250.

Item 11 is one of what are often considered the three greatest private press works ever printed: The English Bible containing the Old Testament & the New Testament. It was published in five volumes from 1903-1905 by the Doves Press. Most often referred to simply as the Doves Bible, it is a masterpiece of artistic design and fine printing. This copy is signed by Doves printer Thomas J. Cobden-Sanderson. $12,500.


Item 18 is a sad tale: The Memoirs of the Celebrated and Beautiful Mrs. Ann Carson, Daughter of an Officer of the U.S. Navy, and Wife of Another, whose life terminated in a Philadelphia prison. Mrs. Carson married a naval officer at a young age. He was not the greatest of husbands, leaving home for long stretches of time, as might be expected of a man of the sea. However, when he left and didn't return for five years, Mrs. Carson presumed he was dead. She remarried a Lieutenant Richard Smith, a much younger man, only to have her long lost husband reappear. Neither Mrs. Carson nor Mr. Smith were pleased with this development. Smith did the logical thing, in his mind, to resolve the dilemma. He killed Mr. Carson. He was convicted and sentenced to death. Mrs. Carson attempted to kidnap the Governor to have him pardoned, not the greatest of ideas. Smith was executed anyway, and Mrs. Carson was put on trial, but managed to get herself acquitted. It was at this time that Mrs. Carson was befriended by the author Mary Clarke, who wrote her story and published it in 1822. This copy, though, is the second edition, published in 1838. After the first edition was published, Mrs. Carson engaged in some illegal activities such as counterfeiting, found herself in prison, and died there before this second edition was published in 1838. Hence, we find an addition about dying in prison. $950.


Perhaps if Mrs. Carson had read this book, she would not have wandered so far astray: Female Improvement, by Mrs. John Sandford. Elizabeth Sandford wrote books on how women could improve their lives through education, though it was mostly focused on education in the domestic sort of activities that would not interfere with men's dominance of intellectual pursuits. Still, in her era (the book was published in 1836), any education was a step forward for women, and Mrs. Standford promoted some learning beyond simply baking cookies and cleaning house. She was moderately progressive for her time. After noting that the book was “composed at intervals, so as not to interfere with maternal and domestic duties,” she expounds on her theory that women mature and become more thoughtful than men early, but by their late teens, their intellectual growth suddenly stops, while men continue to grow and soon distance themselves from women. Continuing education, she believes, will keep women from dropping quite so far behind. Considering the era, and the fact that her husband was a clergyman, this was probably as daring as she could be. Item 85. $650.


Those who believe that moderate drinking is all right should read this next book: The Ruined Deacon. A True Story. Written by “A Lady,” one Mary L. Fox, with no other titles attributed to her. This tale of woe was published in 1834. The Deacon, a tanner by trade, with a small farm, and his industrious wife, are respectable members of their community. However, the Deacon had learned from his parents that moderate drinking was acceptable. Unfortunately, as time goes on, his drinking becomes immoderate, he loses his possessions, and his wife turns into a raving “maniac.” The year 1834 was centered in a period of a rapidly growing temperance movement that would finally, and briefly, have its way for a decade many years later with Prohibition. While Ms. Fox labels this a “true” story, we have no way to vouch for its accuracy, as names were changed to protect the guilty. Item 31. $450.


Item 96 is the greatest collection of maps of the American West ever published, Carl Wheat's Mapping the Transmississippi West 1540-1861.Published in five volumes, bound in six, it contains facsimiles of over 300 old maps, ranging from Spanish times through the Louisiana Purchase, Lewis and Clark and Fremont's expeditions, Mexican boundary, railroad, and geologic surveys, and up to the Civil War. $2,950.


Michael Thompson Books may be reached at 323-658-1901 or mrtbksla@pacbell.net. Their website is www.mrtbooksla.com.