Important Autographs and Manuscripts from The Raab Collection 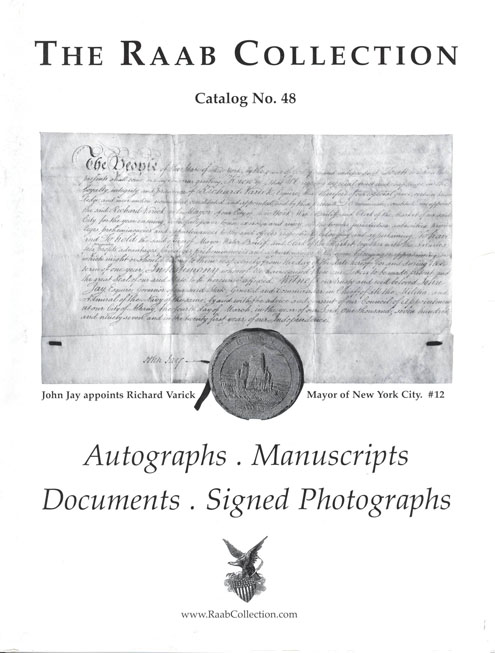 Important Autographs and Manuscripts from The Raab Collection

The Raab Collection has issued its 48th catalogue of signed documents. This one has its focus, historical American documents, but this is by no means exclusive. After all, King George III was certainly not an American. Nor was Napoleon. And while the many signers of the Declaration of Independence whose autographs are found here are historic persons, people like Ronald Reagan and George H.W. Bush are more contemporary than historic. However, there is one theme that runs through this catalogue: the people whose autographs are offered are important and very collectible figures. While a few are simple autographs, the great majority are manuscripts providing many fascinating looks into the personalities of the men and women who wrote them. Here are just a few.

The winter of 1777-1778 was a critical period for Washington's Continental Army. The Americans were encamped at Whitemarsh, the British having occupied Philadelphia. The British appeared poised for the kill. Washington had determined to move farther away to Valley Forge where they would be safer for the winter. However, the British planned to attack before the move could be accomplished. In the meantime, Washington had to strengthen his defenses. One of the things he did to defend his troops was set up a series of fascines, tightly wound bundles of wood that afforded protection. Item 13 is Washington's signed order for these fascines, which Washington wanted to be 8 feet long, two feet around, and composed of small wood. Priced at $21,900.

After Washington succeeded in changing the course of history on one continent, Napoleon would do the same on another, though the outcome was decidedly different. In 1807, Napoleon had spread French hegemony throughout much of Europe in an attempt to shut out his rivals, the British. However, Portugal had friendly relations with the British, and maintained trade despite Napoleon's displeasure. He decided to attack Portugal, but as anyone familiar with geography will instantly recognize, you don't go from France to Portugal without crossing through Spain. While Spain was Napoleon's ally, this move angered the Spanish, and led to the Peninsular War, a series of battles with the Spanish from 1807-1814 that drained resources the French leader could ill afford. Item 31 is Napoleon's letter to his Minister of War ordering that French forces enter Spain and move toward the Portuguese frontier. $27,500.

When Napoleon's empire came to a final ending at Waterloo, the man on the other side of the battle was Britain's Duke Of Wellington. It made the Duke Britain's foremost military figure of the era, and undoubtedly one of the most distinguished guests when, in 1840, Queen Victoria married Prince Albert. The wedding took place just three years into what would be a 63-year reign that would carry on all the way until the next century (Albert predeceased Victoria by 40 years). Item 34 is the Duke of Wellington's invitation to Victoria and Albert's wedding. $8,000.