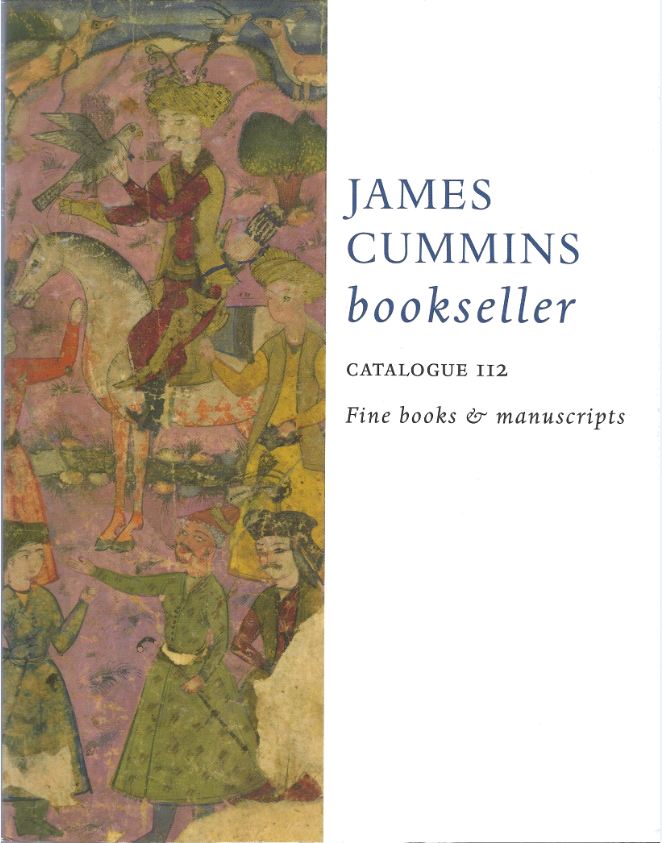 James Cummins Bookseller has issued Catalogue 112 of Fine Books and Manuscripts. This catalogue contains a wide mix of material, making it hard to describe beyond the word “fine.” The works here are notable both for top condition and significance. This is material certainly suitable for a fine collection. Here are some examples of what you will find.


Item 5 is a set of the first four volumes of the History of Woman's Suffrage, edited by Susan Anthony, Elizabeth Cady Stanton, Matilda Gage, and Ida Husted Harper. The four volumes were published between 1881 and 1902. The first and fourth volumes are inscribed by Susan B. Anthony to businessman, author and women's rights supporter George Francis Train. Train made a great amount of money in transportation, including, appropriately, railroads. He also was something of an eccentric, particularly as he aged. In 1872, he ran an independent campaign for president, and was jailed for a while for supporting a publication deemed obscene. In his spare time, he attempted several around the world trips in an air balloon. He was the inspiration for Jules Verne's classic Around the World in 80 Days. Train also was a strong supporter of various causes, including woman's suffrage, and had financially backed Susan Anthony and toured Kansas with her. Two more volumes were later added to this title in the 1920s, but they are not present with this set, not surprisingly as Train died in 1904. Priced at $15,000.


Item 57 presents a collection of 1970s letters on a single topic from an amazing collection of authors. A few of the authors included are Ray Bradbury, Erskine Caldwell, Michael Crichton, Joseph Heller, Erica Jong, Stephen King, Norman Mailer, Joyce Carol Oates, William Saroyan, Herman Wouk, and Robert Penn Warren. A note from Thornton Wilder says he can't participate because he is “very old and half blind,” while Conrad Aiken's widow explains he cannot participate because he is dead. All told, 65 responses are included. And the topic? Writers Who Drink / Drinkers Who Write. This subject would probably not be treated so lightly today, but in 1978, it worked for a story in Writer's Digest. Malcolm Cowley observes that Hemingway was a heavy drinker, Conrad Aiken “consumed more gin than anyone else in the world.” Stephen King says “I like to write when I'm drunk...but I never wrote anything that was worth a shit under the influence of pot or any of the hallucinogenics...” John Cheever offers some insight with “The immense happiness of writing to one's satisfaction can be equaled only by sex or sauce or both...” Norman Mailer, who had a reputation for alcohol abuse, wisely responds, “Pass.” $15,000.


Item 69 is another extensive collection, perhaps the best on its subject, a great American tragedy of the 1880s. It pertains to the assassination of President James Garfield. Garfield is something of a forgotten President. He was a very popular Ohio Congressman and Civil War veteran, but not a presidential contender in 1880. However, the Republican convention became deadlocked that year, between former President Ulysses Grant, future nominee James G. Blaine, and Senator John Sherman, brother of General William Tecumseh Sherman. The result was Garfield being selected as a compromise. He went on to be elected in the fall, and was a very popular man when he took office in 1881. Unfortunately, we never got to see whether Garfield would have been a great president. Just 6 months into office, he was assassinated by a disappointed, mentally unbalanced office seeker named Charles Guiteau. This collection includes material relating to the assassination and to the trial and execution of Guiteau. Among the items are five letters and manuscripts written by Guiteau, one a very early letter, another a “chilling jailhouse manuscript” written shortly before his execution. There is one of prosecutor James K. Porter's trial notebooks, and correspondence between Porter and a trial attendee, civil rights pioneer Frederick Douglass. There is an autograph draft of the doctor's announcement of Garfield's death, a trial autograph album with signatures from Guiteau, attorneys, jurors and attendees, the Speaker of the House's letter conveying a first-hand account of Garfield's condition on the day of the shooting, one of Garfield's last signatures (from the morning of the shooting), and a letter from Lucretia Garfield, still in mourning several years later. $90,000.