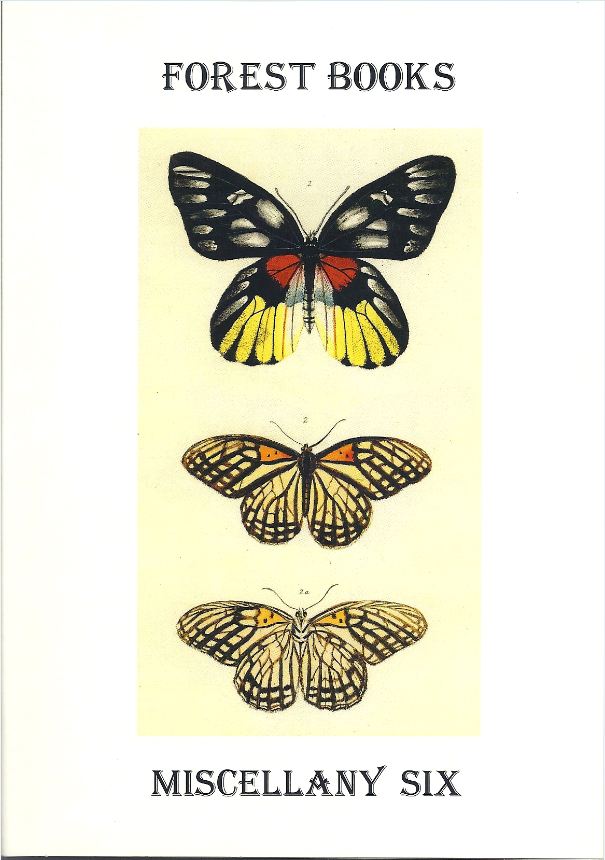 Forest Books has issued a new catalogue with a short title and a long title. Both are accurate. The short is succinct, the long reminiscent of those titles books had in the 19th century, which were almost as long and descriptive as the book itself. The short title is Miscellany Six, the long title A Catalogue of Curious and Interesting Books, Pamphlets & Printed Ephemera, On a wide variety of subjects. Including: Agriculture, Architecture, Botany, Children's Books, Crime & Law, Cookery, Economics, Education, English Literature, Farriery & Equestrian, The Fine Arts, Genealogy, Geology, Juvenile Games, Ireland, Military & Naval, Natural History, Private Printing, Provincial Poetry, Social Studies, Science & Medicine, Sporting Books, Technology, Trade Catalogues, Travel & Topography, etc. There really isn't any more necessary in terms of description of this catalogue, so let's take a look at a few of the items offered.


A momentary fit of jealous temper resulted in the most extreme of consequences for John Horwood on April 13, 1821 (a Friday the 13th – no sign of good luck). Item 18 is a broadside headed The Trial & Execution of John Horwood, which took place at the New City Gaol, This Day, (Friday April 13 1821,) For the wilful Murder of Eliza Balsam. Horwood was an 18-year-old miner who spotted Miss Balsam, his ex-girlfriend, with a new suitor. It obviously upset Horwood, who threw a stone at his former girlfriend. It caused only a minor injury, but she died in later surgery. Evidently, it was attributed to Horwood as he was convicted of murder and executed. It was probably of little comfort to him that he had the honor of being the first prisoner to be hung at Bristol's new jail. In a bit grisly conclusion to the case, Horwood's body was given to the surgeon, who skinned and tanned his hide to bind the papers from the case. Horwood's skeleton was then hung in a closet, noose still around his neck, and was not buried until 2011, 190 years later. Priced at £395 (British pounds, or about $622 in U.S. currency).


From the “truth” is stranger than fiction department, here is another English broadside, commemorating a most unusual discovery on June 16, 1811. On that date a landlady made a most surprising find, a dark-colored egg that bore the words in white German lettering “Bonaparte will Die this year.” How a chicken would have known this, or how to write German, or how to print lettering on her egg, is not known. Apparently these animals are more intelligent than we thought. Then again, maybe not, as Napoleon did not die in 1811, but lived for another decade. It is reported that many people came to the lady's house to see this amazing egg, and though offered a hefty price for it, she intended to bring it to the Prince Regent. The broadside is headed, True Account of a Wonderful Egg that was found at the Wool Pack Public-House, Lawford's-Gate. Item 19. £125 (US $197).


England was certainly a fine place to live in the 19th century, but there was an even better place, at least according to J. Gray Smith – East Tennessee. Item 162 is his A Brief Historical, Statistical, and Descriptive review of East Tennessee...with Remarks to Emigrants. Smith extols the land's virtues, its agriculture, mining and manufacturing, and abundance of opportunity for employment. Smith claimed to have lived for several years in East Tennessee and encouraged the English to immigrate to this wonderful land. While Smith undoubtedly wished the best for his fellow countrymen, his primary motivation seems to have been to sell 179 farms owned by the East Tennessee Land Company. The book was published in 1842. £1,550 (US $2,441).


Item 51 is a broadside printing of a song, The Doctor and the Devil. A Gloucestershire Song. If you would like to sing along, but don't know the melody, it is sung to the tune of Vicar and Moses. Hope that helps. This is another “true” story. The doctor, evidently an educator and a self-righteous moralist, went to a brothel in Oxford and called out whether any students were partaking of the wares. When the ladies replied no, he responded, “since tis so my dear then quietly let me in.” The truth of the story was evidenced by the claim that when drunk, the doctor still retells the story. £75 (US $118).