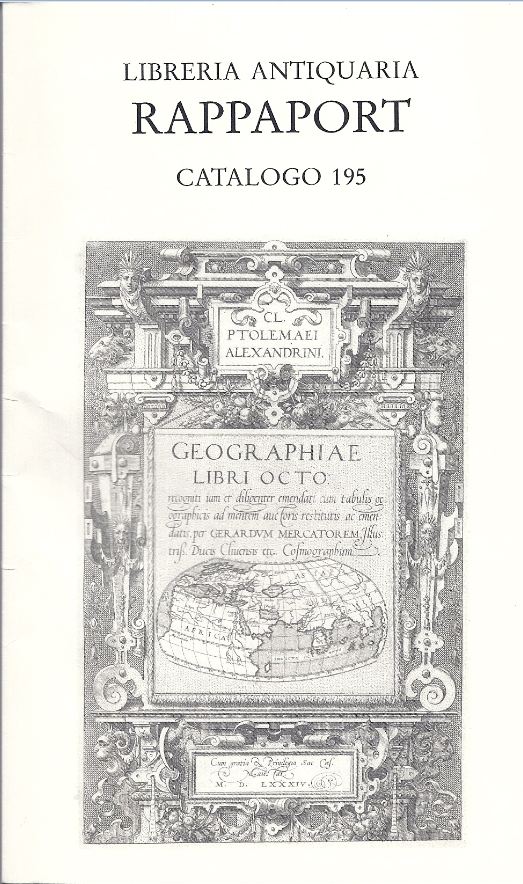 This month we received our first catalogue from Libreria Antiquaria Rappaport, their Catalogo 195. Their catalogues may be new to our reviews, but Rappaport has been selling books for over a century. They are located in Rome, Italy, in a building appropriate to their focus, a quite old Italian structure. The bookseller primarily features early continental books, from incunabula through the 19th century. The heaviest concentration of books is in the Italian language, but we find many in other languages, including Latin, French, and English. The catalogue itself is in Italian, but there are numerous notes in English that will enable an English-speaker to make their way through its pages. Here are some of the antiquarian works we found.


Item 74 is a guidebook to the ruins of ancient Rome from a time that is now fairly ancient itself. The author was Bartolomeo Marliano, born in 1488, who came to Rome after his years as a student. He wrote several books, but this one is his best known: Antiquae Romae Topographia, libri septem. Published in 1534, it is a guide to the ancient structures of Rome, compiled both from the works of others and his own archeological observations. Several more editions and translations to other languages would appear in the following years of this popular book, but this is the first edition. Priced at €2,000 (euros, or approximately $2,533 U.S. Dollars).


Italy is noted for producing some of the greatest works of science, architecture, and art, but children's books? You may not think of Italy as the source of this sort of book, and yet, here is one everyone knows, even in lands far across the sea: Le avventure di Pinocchio. Storia di unburattino. This is, of course, the story of Pinocchio, the wooden puppet who came to life, but suffered from a certain mysterious condition that made it hard to disguise when he told a lie. The author of this tale was Carlo Lorenzini, though he is better known by his pen name of Carlo Collodi. First published in 1883, this is the 1890 fifth and final edition issued under Collodi's control, the author dying that year, his character's coming international fame not yet known. Item 27. €2,500 (US $3,168).