Americana and The West from Arthur H. Clark 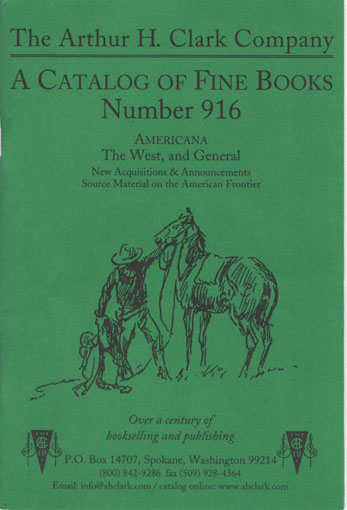 Americana and The West from Arthur H. Clark

The Arthur H. Clark Company of Spokane, Washington, has been in the bookselling and publishing business for over a century. Their specialty is America and the West. Recently they published their catalogue number 916, "Americana, The West, and General." It is a collection of 329 items, most easily within the financial means of virtually any collector. Many cover places and people that are not well known, and will be of greatest interest to specialty collectors, while others pertain to events familiar to all. This is a catalogue filled with items you won't see everyday. Here are a few samples.

Item 38 is a book that will be of interest to those who collect western photography and American politics. That's an odd combination. It's Arizona Portraits, the second edition published in 1940, containing 24 black and white photographs of Arizona landscapes and Indians. But why politics? It seems the young photographer was one Barry Goldwater, who self-published this collection. Goldwater would go on to serve as an Arizona senator and be the Republican presidential nominee in 1964. While unsuccessful, his campaign would transform the Republican Party of Roosevelt and Eisenhower to that of Reagan and Bush, though Goldwater himself would not have approved of all of the changes. Priced at $70.

Alexander Hamilton, one of the "Founding Fathers" who had been more or less in eclipse for many years, has been rediscovered recently thanks to some newly published books. Here are a couple that recounted his illustrious career back before he was in vogue, and will be worth a look by those who recognize the importance of this early advocate of a strong federal government. Item 84 is the two-volume set Alexander Hamilton, by Broadus Mitchell, published in 1962. This is one of the most detailed biographies produced of this important leader. $67.50. Item 85 is Alexander Hamilton: Portrait in Paradox, by John C. Miller. This 1959 biography focuses primarily on Hamilton's public career. $45.

General George Armstrong Custer is a western military figure who still fascinates us today, over a century after meeting his untimely end at Little Big Horn. Of course if Custer had died half a century later in a Veteran's Hospital somewhere, we probably never would have heard of him, so that unfortunate incident at least left him with a lasting reputation, though not one he would have wished for. Arthur Clark offers eleven titles in the field of "Custeriana." For example, item 152, Cyclorama of Custer's Last Battle or the Battle of Little Big Horn, contains complete reports of the battle from Major Reno, Captain Benteen, and Sitting Bull, along with a defense of her husband from Mrs. Custer. Edited by A.J. Donnelle and originally published in 1899, this is a 1966 reprint. $32.50. Item 153 is Colonel Graham's The Story of Little Big Horn: Custer's Last Fight. Published in 1926, this book did much to rekindle interest in this event as it was fading from the nation's collective memory. $145. Item 161, by David Humphreys Miller, provides a different take on the story. It's called Custer's Fall. The Indian Side of the Story. Miller interviewed 71 Indians who had participated in Little Big Horn before publishing his book in 1957. This copy is signed by the author. $42. Among other Custer titles offered is one about the life of Mitch Boyer, the mixed-blood scout who died with Custer, and another which makes the controversial claim that Custer's men panicked and committed suicide.