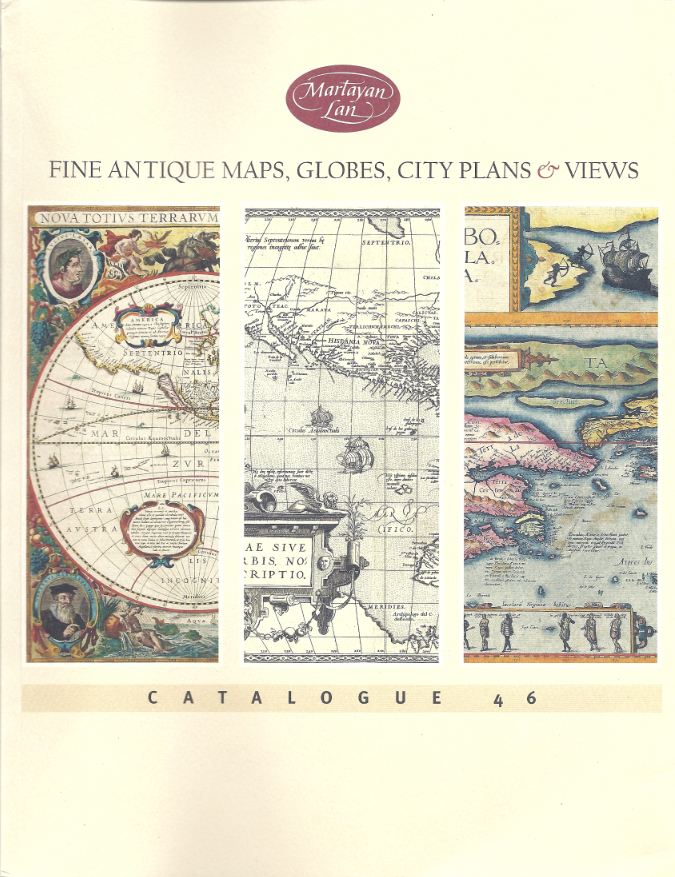 Martayan Lan of New York City has published their Catalogue 46, Fine Antique Maps, Globes, City Plans & Views. This catalogue begins with a series of very old maps of the world, displaying early discoveries of places far from Europe, and then how understandings of these lands evolved as more information was gathered by subsequent voyages. The catalogue itself evolves, with maps of specific regions, most notably the Western Hemisphere and North America in particular. What follows this is maps of individual states or areas in America, Canada and the Arctic, and from there to other continents and specific countries, areas, and cities. For those who collect maps, there are many fine examples offered, some of which undoubtedly will fill a space in your collection.


We start with the world as it was before the Age of Discovery, as Columbus knew it before he set off on his epic voyage. It is the world map that appeared in Hartman Schedel's Nuremberg Chronicle in 1493. That was the year Columbus returned from his discovery of the New World, but that information was not yet available to Schedel at the time he published his thorough, historic work. The world in 1493 consisted of Europe, northern Africa, and eastern and central Asia. Massive expansion lay just over the horizon in 1493. Along the side of the map are images of strange people, some half human, half animal, another with six arms. Europeans fantasized as to what existed in distant lands at a time when so little was known. Martayan Lan notes that the tendency to demonize inhabitants of far off lands would lead to less than exemplary treatment of those peoples as Europeans came to conquer much of the world. Item 4. Priced at $30,000.


A century later, the world had long since been circumnavigated, giving a picture all the way around, at least from east to west. The Americas are now present, and by the date of this version of Ortelius' Typvs Orbis Terrarvm, 1587, those continents had taken a clearly recognizable shape, though perfection was still a long way off. What is most noticeable about this map is the huge southern continent, emanating from the South Pole. This continent is almost as large as all of the others combined. It would take until Cook's voyages two centuries later before this myth was finally laid to rest. The existence of this continent was presumed primarily to balance off the greater land masses in the Northern Hemisphere. Item 10. $9,000.


Item 9 is the Montanus world map from the Plantin Polyglot Bible of 1571. The Americas were somewhat rougher than on Ortelius' map 16 years later, but what stands out on this map is the tip of a land approximately where Australia is located. The first reporting of such a land did not come until 30 years later. There are a few possible explanations for this tip of a land, that is unfinished to the south. This map does not show the widely accepted southern continent. Perhaps this was meant to be a tip of this undisplayed continent. Another possibility is it was a mapmaker's poetic license. The third, and most intriguing theory, is that it reflects reports from an otherwise unrecorded and unknown voyage that spotted Australia. $15,000.