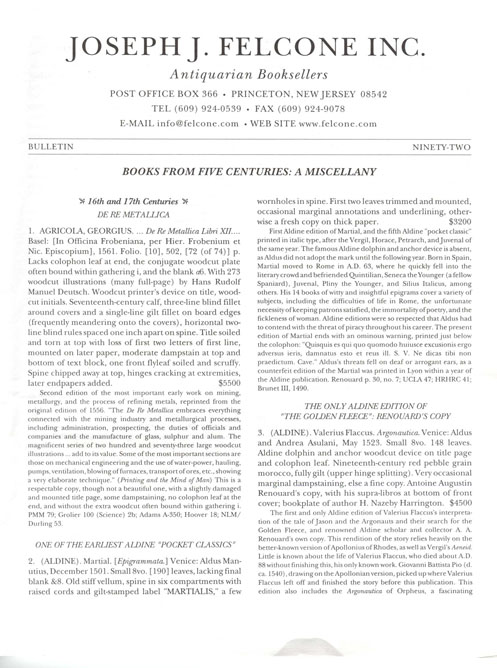 Joseph J. Felcone Antiquarian Booksellers has issued its Bulletin Ninety-Two. This is not the typical publication for the bookseller noted as the foremost expert on and dealer in New Jerseyana. The titles gives it away: Books From Five Centuries: A Miscellany. New Jersey hasn't been around for five centuries, so there must be more. And there is. Here are a few samples.

Long before Europeans were settling on the Jersey shore, Roger Ascham was writing instructions on how to teach your children. First published in 1570, this is the 1589 London edition of The Scholemaster. Or, Playne and Perfite Way of Teaching Children. To Understande, Write, and Speake the Latin Tong.... How could Ascham be a teacher if he couldn't even spell? In the book, the kindly Ascham calls for gentle coercion rather than flogging of children. This strange philosophy of education became quite influential, perhaps because Ascham was not only a highly regarded educator, but had been the private tutor of Queen Elizabeth I in her princess days. Item 4. Priced at $4,500.

Franciscus Mercurius van Helmont produced one of the earlier books on instructing the deaf on lip-reading and speaking. Helmont possessed some unusual spiritual views, and they are reflected in this work, Alphabeti vere Naturalis Hebraici.... and others. In this one, he expresses the belief that the design of Hebrew letters reflect positions of the tongue when speaking, and attempts to use this to teach the deaf. Item 19. From 1657. $3,800.

Item 169 touches on an issue being debated today, whether it is acceptable to execute youth under the age of 18. In 1821, this was not an issue. This is a broadside headed Execution of Stephen Merrill Clark, which took place on Winter Island, Salem, on Thursday, May 10, 1821. For the crime of arson. Clark was only sixteen, and no one died (other than Clark himself) as a result of his crime, but those were harder times. Indeed, the execution was evidently something of a morbid form of entertainment. "At an early hour the place of execution was literally surrounded by anxious multitudes, waiting the arrival of the fatal moment...." the broadside tells us. Another crowd followed the procession of officers with Merrill, those officers having to move the crowd aside to reach the gallows. Clark is said to have confessed, and to have been forgiven by his victims. At one point he tried to bribe his jailer to be set free, but without success. As to why he set the fire in the first place, the broadside is unclear. He was supposedly inveigled into the act by some "lewd" women, and the clear moral of this broadside is to let others beware of such ladies. However, we are not told why these women wanted the properties burned down. All we know is that Merrill did it, these women became his accusers, Merrill was executed, and they were "permitted to go unpunished." $900.