The Arctic and Canadiana from Bjarne Tokerud - Bookseller 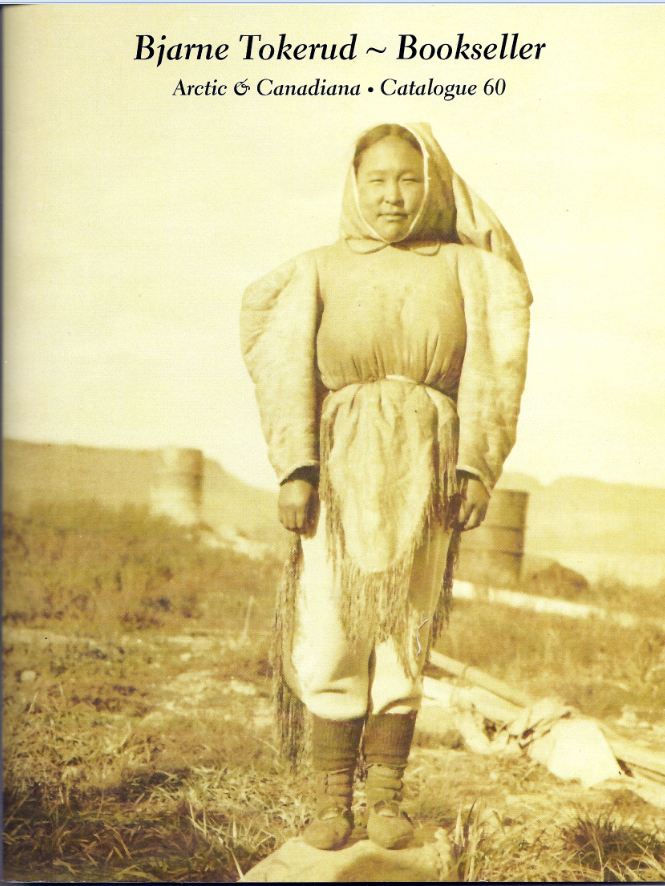 Mine be the task to sing of lands of snow,

Bjarne Tokerud – Bookseller, recently issued his Catalogue 60, Arctic & Canadiana. Since most of us shiver at the thought of these far northern lands, it seems appropriate to start with some poetry representing those who love the ice. That quote comes from The Greenland Minstrel, by Frederick Blackley, published in 1839. That is just one of the items in this catalogue, filled with works by individuals who either loved these cold, often barren lands, or at least were driven to experience them. As that summertime attire on the cover attests (must be summer – no snow), there is no lying around the pool in northern Canada or the Arctic. However, there is life, there are people, however scattered, and somehow they survive the elements. Their lives and adventures make for fascinating reading, and Bjarne Tokerud offers lots of that. Let's take a look.


The Lewis and Clark expedition of 1804 is well known as the first American overland expedition to make it all the way to the Pacific Ocean. However, it was not the first such journey across North America. That honor belongs to Alexander Mackenzie, and he had to try twice as hard. Mackenzie was an the employee of the North West Company, a Canadian fur trading outfit interested in finding an overland route to the fur gathering regions of the Pacific. Following speculation that the Pacific could be reached from Great Slave Lake in northern Canada, Mackenzie made the long journey from Montreal, and once at the lake, began following a river. In the year 1789, Mackenzie followed this river, now known as the Mackenzie River, all the way to its mouth. It was not what he expected. Instead, he found it emptied into the “frozen,” or Arctic Ocean. It was back to the drawing board. Four years later, in 1793, Mackenzie made a second attempt. This time he followed various smaller rivers and overland routes, picking up tips from Indians along the way. Eventually, he made his way to the Bella Coola River, which terminates in the Pacific Ocean in British Columbia. Mackenzie had become the first to cross the North American continent north of the narrow passages of Central America. He gives an account of the journeys in his book, Voyages from Montreal on the River St. Laurence Through the Continent of North America to the Frozen and Pacific Oceans in the Years 1789 and 1793. It was published in 1801. Item 7. Priced at $7,000 (all prices are in Canadian dollars, which we will not translate to American dollars as they are within a few cents of being equal).


Item 50 is an account of A Thousand Days in the Arctic. It was written by Frederick G. Jackson of Britain's Jackson-Harmsworth Expedition of 1894-1897. They spent their three years in Franz Joseph Land, an archipelago of very not tropical islands now part of Russia. Most are north of the Arctic Circle, making them the northernmost land on earth except for northern Greenland and Ellesmere Island (Canada). The place is uninhabited by humans, though walruses, Arctic foxes, polar bears and seals call it home. The Jackson-Harmsworth Expedition was designed to gather as much information as possible about this bleak land. Jackson's book takes the form of a day-to-day journal. The most notable event of this visit was when two men showed up unannounced and unexpected in this place far from where any humans were expected to be. It was Fridjof Nansen and Hjalmar Johansen, who led a Norwegian expedition seeking the North Pole in 1893. Nansen believed that if their ship was frozen into the ice at the right place, it would follow the ice flow over the North Pole. At the time, no one had yet reached the pole. By 1895, they realized the ice would not carry them far enough north, so Nansen and Johansen set off on foot, hoping to eventually make it back to Franz Joseph Land and from there to Spitsbergen, where they would hook up with their ship. The two did make it father north than anyone before them before ice blocks forced them back. They made it to one of the Franz Joseph Land islands, and wintered over during 1895-96. When the weather warmed, not in the greatest shape, the two began moving again, when they stumbled upon Jackson, neither having any idea the other might be anywhere near this place. For Nansen and Johansen, it was an amazing stroke of good luck that rescued them. $1,200.


Item 149 is a disaster story: Report on the Great Landslide at Frank, Alberta, 1903. Frank was a mining town in 1903, situated at the base of Turtle Mountain. The Canadian Pacific Railway ran through town. Turtle Mountain had instability issues, with constant freezing and thawing in its fissures. The coal mining activity probably did not help. Early on the morning of April 29, 1903, a huge mass of rocks, some boulders as large as a house, came tumbling down the side. A section of mountain 3,300 feet wide, 1,400 feet high, and 500 feet deep, broke loose. Fortunately, it missed the center of town, but those along the edge and some people at the mine were buried, estimated at close to 100 people. It took three weeks to reopen the railroad tracks, and even the mine reopened in time, finally closing down in 1917. Richard McConnell and Reginald Brock's account of the disaster was published in 1904. $75.