Science, Americana, Literature and More from B & L Rootenberg 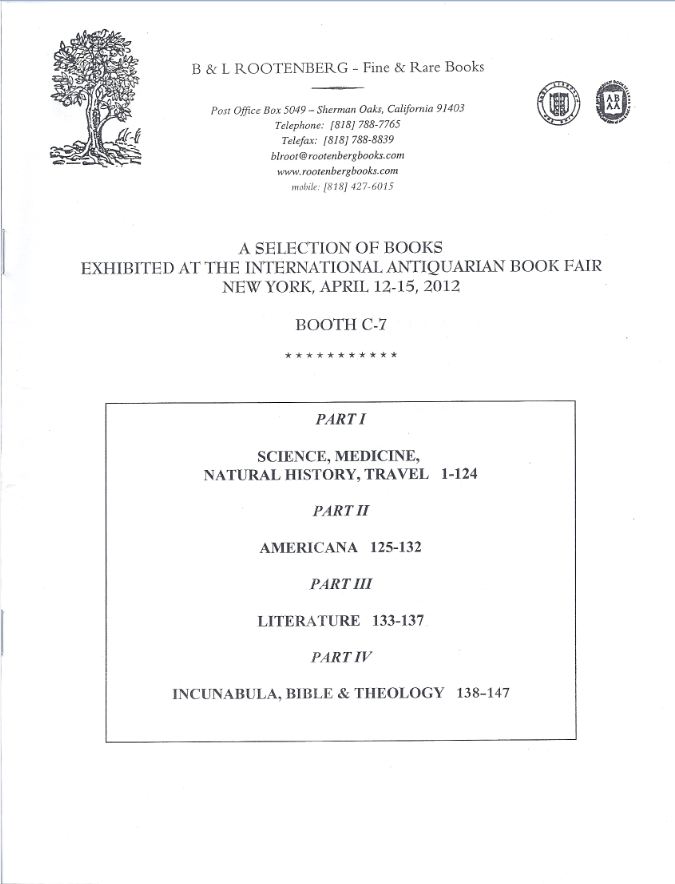 From the New York Fair.

B & L Rootenberg Fine & Rare Books recently prepared A Selection of Books Exhibited at the International Antiquarian Book Fair New York. Their catalogue is divided into four sections, (1) Science, Medicine, Natural History, Travel; (2) Americana; (3) Literature; (4) Incunabula, Bible & Theology. The greatest concentration is in the first category, science and medicine in particular. The books are most suitable for an antiquarian fair, as with a very few exceptions, they are old, 19th century and earlier, sometimes much earlier. Among the books offered are some of the greatest works ever published, particularly in the sciences. These are a few of them.

Here is a book that turned the Earth around, quite literally: De revolutionibus orbium... by Copernicus. This is the book that made the startling revelation that the Earth revolved around the sun, not the other way around. It confounded the common sense of observing the sun rise and fall each day, and contradicted established religious dogma. Somehow, Copernicus managed to get away with it all, although his successor would not. Offered is the second edition from 1566. Item 20. Priced at $150,000.


Item 50 comes from Copernicus' defender, the Italian astronomer Galileo. This is a 1632 first edition of his Dialogo... This book is presented as a dialogue between a defender of Copernicus' heliocentric system and the traditional Earth as center of the universe model. However, from the “discussion” it is obvious that Galileo believed in Copernicus' sun centered system. These views were not appreciated by the Church, which condemned Galileo and put him under house arrest for the remainder of his life. $100,000.


While Copernicus and Galileo accurately described what was going on, it was up to Isaac Newton to explain why. Newton developed his theories of motion and gravity which explained why the universe behaves as it does. He explained it all in his Philosophiae naturalis principia mathematica. Offered is a first edition, published in 1687. Item 88. $195,000.


Newton had his detractors. Item 87 is R.J. Morrison's The new principia; or, true system of astronomy, published in 1868 (second edition). Morrison had a different idea of truth than most of us. In his treatise, Morrison “disproves” Newton's theories, and establishes that the sun is only 365,006.5 miles from the Earth. This could explain global warming. $500.


Item 2 offers a cure for an age-old condition, as offered by an anonymous “Fellow of the Royal College of Surgeons.” The title of this 1883 book is, Kallos. A treatise on the scientific culture of personal beauty and the cure of ugliness. Rootenberg describes this as a “charming work on the causes and treatments of ugliness.” The author claims that businesses can benefit from having attractive employees, or as the bookseller points out, this is “probably not a politically correct book for today.” $400.


Talk about a day that will live in infamy... Item 132 is one of the first (if not the first) announcement of the United States Tax Law of 1862. This was the law that created the Internal Revenue Service and imposed the first income tax. Yes, you can blame Abraham Lincoln. This law was passed out of necessity. The government was running up large debts to pay for the Civil War and needed another source of revenue. The act created an income tax, which remained in place until it expired ten years later. An attempt to reimpose one in 1894 was struck down by the Supreme Court, leading to the 16th amendment, which legalized a permanent income tax in 1913. $2,000.


If there is just one book of poetry you would like to own, this is probably it. Item 137 is a first edition of Walt Whitman's Leaves of Grass (1855). It is generally considered the quintessential collection of American poetry, a paean to America and democracy. It is also noted for being quite rare. $95,000.