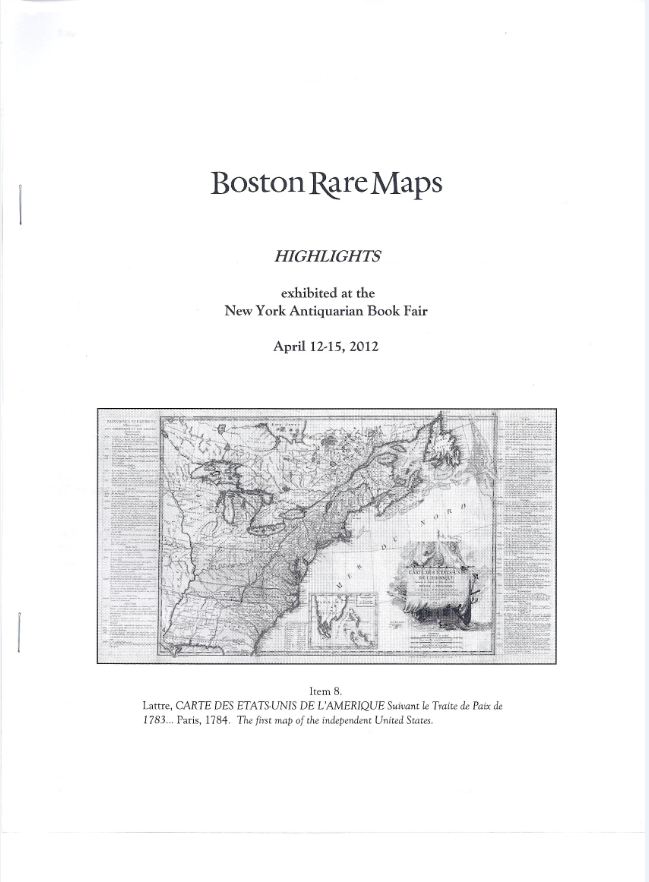 Boston Rare Maps recently published a collection of Highlights exhibited at the New York Antiquarian Book Fair. Boston Rare Maps, quite naturally, is a map specialist, that specialty being American maps in particular. However, their selection also includes other ephemeral printed material, including broadsides, city views, and even a board game and playing cards. If the “Rare Maps” part of their name is correct, the “Boston” is a bit of a misnomer. The firm is located in Southampton, in the same state as Boston, but in western Massachusetts, near Springfield. Of course, using Springfield in your name would not be very helpful. Thirty states have a Springfield. We all know in which state Boston is located.


Boston Rare Maps has been in business now for ten years. It was founded and is operated by Michael Buehler, a map collector who made the transition to dealer, focusing on personal service and scholarly research. The material the firm offers is significant and highly collectible. Here are a few of the maps and ephemeral items they selected for the recent fair.


The first and oldest item offered is an untitled map of the Northeast (including today's Canada) that was provided with William Alexander's Encouragement (1624 or 1625). Alexander was a court favorite who was granted vast holdings in America by King James I in 1621. It covered most of today's Atlantic Canada and Maine. Alexander published his Encouragement as a means of encouraging settlement of his land, and making large land sales. His map provided one of the best early looks at the northeastern coast line, but offers little inland detail. His map contains the first map naming of Cape Cod, as well as showing Martha's Vineyard, Nantucket, Boston Harbor, the Charles River, Cape Ann, Kenebec, Nova Scotia (New Scot Lande) and Newfoundland (New Found Lande). Other familiar sounding names to English ears were added, probably to make the untamed land appear more like home to would-be settlers. The map also shows New France, but Alexander has carefully kept it entirely north of the St. Lawrence. Alexander had little success settling his land, and in 1632, as part of a peace treaty, it was given to France. Alexander ended his life broke and in debt. Priced at $12,500.


The map displayed on the cover of this catalogue is described herein as “the first map of the independent United States” (Boston Rare Maps explains that the Wallis map, often described as the first, came out before the Treaty of Paris was signed). This is Jean Lattre's Cartes Des Etats-Unis de L'Amerique, published, not surprisingly, in Paris. The map is dedicated to Benjamin Franklin, America's Minister Plenipotentiary to France and an enormously popular figure in Paris. This copy of the map contains the rare panels of events in American history which were printed separately, to be pasted on the sides of the map. $40,000.


Item 11 is described as the earliest known state of the first large-format plan of New York City after the Revolution. It is John Anderson's Plan of the City of New York, circa 1796. It reveals the rapid growth taking place in the city, although New York looks tiny by today's standards. It is still basically confined to the southern end of Manhattan Island. Mapmaker Anderson was a good friend of noted New York author Washington Irving. $45,000.

Item 15 is a most interesting report from Brigidier General James Simons of the South Carolina Militia to Governor Pickens. The letter comes with a plan of Fort Moultrie. It is dated the first day of January, 1861, and comes from Charleston. Just 12 days earlier, South Carolina seceded from the Union, the first state to do so. On December 26, 1860, Major Robert Anderson moved the Union forces stationed at Fort Moultrie to the more secure Fort Sumter. It was shortly after this that Simons wrote the Governor, expressing his view that South Carolina forces were in no position to drive Union forces from Fort Sumter. Writes Simons, “I feel it to be my duty – to express my conviction of the inexpediency of commencing actual hostilities on our side, in our present wholly unprepared state, with raw, undisciplined troops, without equipments, munitions or proper arms...” Governor Pickens was apparently outraged by Simons' pessimism, and what he thought to be an implied recommendation of withdrawal. Nonetheless, South Carolina did not move on Fort Sumter for another 100 days, and only then after six other states had also seceded and joined with South Carolina to form the Confederacy. $17,500.