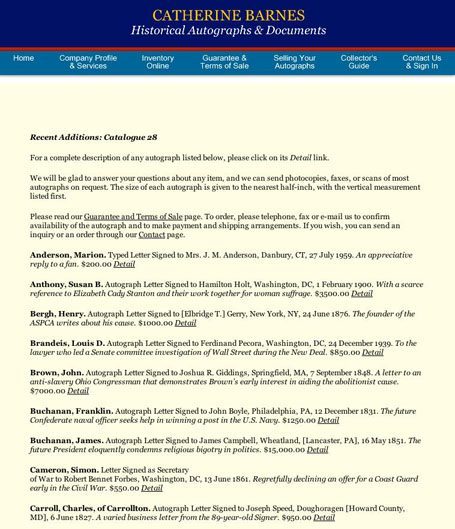 Catherine Barnes has issued a new catalogue of "Historical Autographs and Documents." The times they are a-changin' and so are catalogues as we know them. Rather than a printed catalogue, Catherine Barnes has sent her subscribers a letter and a link. The link takes you to Catalogue 28, or "Recent Additions." Here are a few of these new documents.

One of the more interesting, and perhaps surprising letters comes from future President James Buchanan, while Millard Fillmore was still in the White House. What's surprising is the extraordinary religious tolerance shown by this Pennsylvanian who would be elected president as a Northern man with Southern principles due to his great tolerance of slavery. In 1851, he wrote to James Campbell, a Catholic and Democratic candidate for the state supreme court, in an era of growing nativist and anti-Catholic sentiment. Buchanan predicts that Campbell's candidacy will not be seriously harmed by his faith, and speaking of those prejudiced against him, Buchanan says "if on earth there is any thing I do despise it is to witness a poor frail ignorant worm of the dust setting himself up in the place of God to condemn his fellow man because professing a different faith from himself." Buchanan then concludes, "....I rejoice that a Catholic is to be settled upon the ticket. It is destined to do much good in correcting the opinions of honest but prejudiced men. It will be a contest between Democracy & Bigotry in which the former is sure to prevail." If only it were so easy. Campbell lost, while his four Democratic running mates won. Over the next few years, anti-Catholic nativism would rapidly spread with the birth and sudden growth of the Know Nothing party, culminating with their nomination of the former President Millard Fillmore for president. The Know Nothings would be defeated by this same James Buchanan, but those progressive sentiments expressed in the letter would not carry over to his dealings on the issue of slavery, and ultimately Buchanan's presidency would be, in most historians' eyes, a failed one. Priced at $15,000.

While Catholics were shut out of many public roles in this era, Charles Carroll, a wealthy landowner and businessman from Maryland, was not. He is the lone Catholic to sign the Declaration of Independence, and was the last surviving signer of that document. That's surprising as he was already 39 when he signed it. Carroll lived another 56 years, dying in 1832 at the age of 95. This is a letter he wrote when he was merely 89. It involves some business and legal matters the evidently still sharp Carroll was managing. $950.

If you collect letters written by presidents between their terms of office, you will not find many pieces to collect. Here's one. Of course it must come from Grover Cleveland, as he was the only president to serve nonconsecutive terms. Only a little over a week after attending the inauguration of his successor, Benjamin Harrison, Cleveland wrote his former Postmaster General. Cleveland states that he was amazed by the cheers he received as he rode through the streets of Washington. "To tell you the truth I could see no difference between the demonstrations now and those I used to encounter when I was actually President," says the surprised Cleveland. Speaking of his future, Cleveland writes, "I am not at all concerned and am enjoying my release from official care more than I can tell you." Evidently he didn't enjoy it all that much, as four years later he was back in office. $1,000.