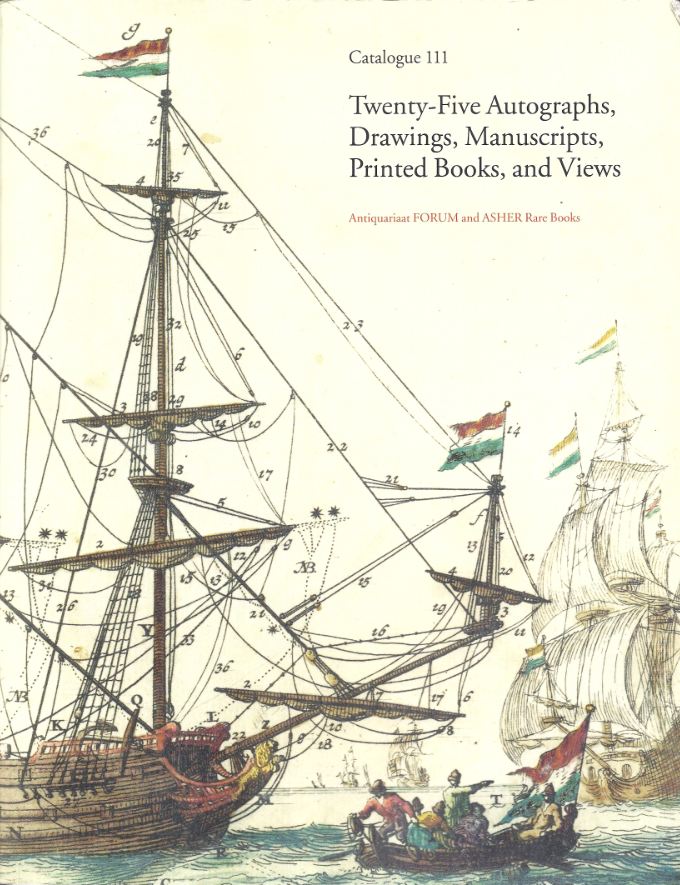 The Antiquariat Forum and Asher Rare Books have issued their Catalogue 111, Twenty-Five Autographs, Drawings, Manuscripts, Printed Books, and Views. It is always a tip off that the items will be special when you receive a large, finely printed catalogue that contains just 25 items. The catalogue itself is a statement about what’s inside. Inside, as the title implies, is a variety of material, ranging from old to very old, and primarily European, though China and Japan each make their appearances with very early material. Here, now, are a few of these items.


Item 5 is Journal de la Navigation autour de Globe… by Hyacinthe de Bougainville. Hyacinthe is not quite as well-known as his father, explorer Louis de Bougainville, who also made a circumnavigation of the world. However, they were certainly the first father and son to undertake such journeys at different times. Hyacinthe was sent out to reestablish relations between France and Cochin China, as well as visiting many other places. During the years he was at sea, from 1824-1826, de Bougainville picked up much information concerning the natural history of the places he visited, and that is the feature of his account published in 1837. It consists of two text volumes and a folio atlas. Priced at €29,000 (euros, or approximately $38,020 in U.S. dollars).


Guilio Aleni was one of those remarkably dedicated missionaries. An Italian, he was accepted to the Jesuits in 1600, and ten years later headed off to China as a missionary. He was still there when he died in 1649. Along the way, he built several churches, and adopted many of the ways and cultures of the Chinese people, all the while remaining totally loyal to his Christian faith. Item 1 is one of several books he wrote, T’ien-chu sheng-chiao ssu-tzu ching-wen, published in Beijing in 1660. This is a first edition of a work about the omnipotence of God. It was printed using large woodcut Chinese characters, perhaps to make it easier for the old or young to read. €45,000 (US $59,000).


Athanasius Kircher has been described as the “last Renaissance man.” We aren’t sure whether he was the last, but definitely he was one. Kircher was a Jesuit, a contemporary of Aleni, and he wrote an encyclopedia about China. However, he also wrote about almost everything else. He was a great scholar, writing about many branches of science, medicine, Egyptology, fossils, various branches of technology and mechanics, and many other topics. His works tend to combine brilliant insights with at times wild speculation. For example, he translated many ancient Egyptian hieroglyphs, but his translations for the main part were inaccurate. However, through his use of the microscope, he theorized (quite correctly) that the plague was caused by tiny microorganisms. Item 14 is D’onder-aardse weereld… a first Dutch edition (1682) that covered many branches of science, the Andes Mountains, Iroquois Indians in Canada, the sun, the moon, beasts and demons, subterranean waters, fossils, poisons, minerals, and various other topics. €13,500 (US $17,700).