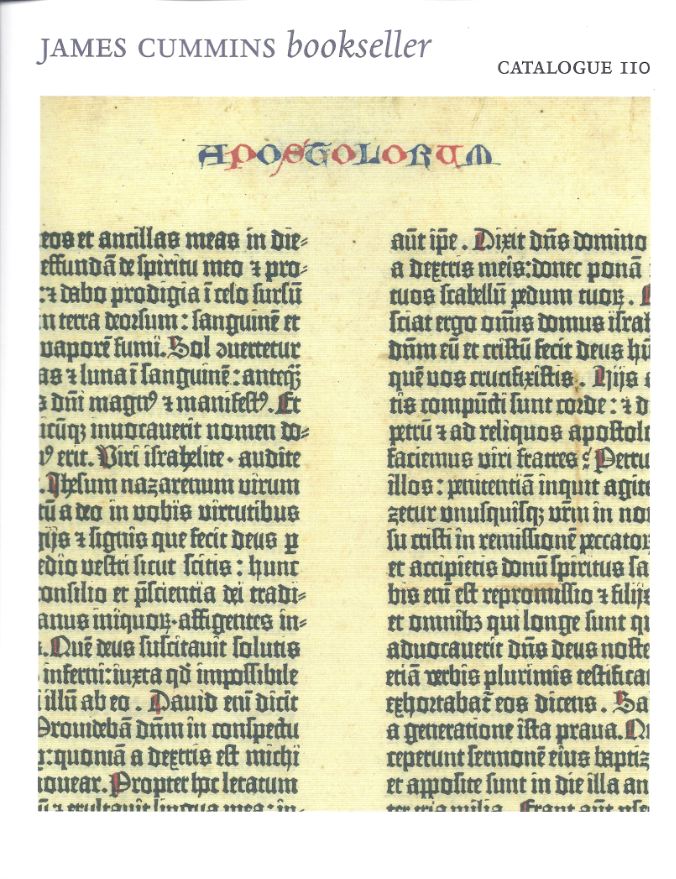 James Cummins Bookseller's Catalogue 110 offers a variety of books and ephemeral material. It is impossible to peg such a variety other than to say this is higher end material, mostly priced in four digits. Rather than try to explain any further, we will take a look at a few samples of the items Cummins has in store, or in catalogue, anyway.


It is always logical to start from the beginning, and for books, that would be 1455. That is when the first book rolled off the press, Gutenberg's Bible. It didn't really roll off. Gutenberg's press was not exactly automated, but nevertheless, it was an unparalleled moment in the history of communications, nothing coming close until at least the 19th century with the invention of the telegraph and telephone. Item 52 is a leaf from the Gutenberg Bible, complete copies long ago disappearing from the market. This is a leaf that is included with A. Edward Newton's essay on Gutenberg, published in 1921 by New York bookseller Gabriel Wells, under the title A Noble Fragment. Wells had separated the leaves from an imperfect copy he purchased at Sotheby's in 1920. Priced at $67,500.


Here is a book that was to science what Gutenberg's Bible was to printing. It is a second edition of Isaac Newton's Principia, published in 1713 (one of only three editions published during his lifetime). This was the work that introduced Newton's laws of motion and gravity. It explained what was going on in the world, be it the motion of planets or events here on earth. Prior to Newton, Keppler and Galileo explained what was happening, but it was Newton who provided the explanation why. The first edition was published in 1687, but had long ago become very scarce when Newton was convinced to publish this updated version. Item 75. $27,500.


Item 10 is a collection of letters from Phineas T. Barnum to Edward Bok, editor of The Brooklyn Magazine and Ladies Home Journal. However, these letters begin from years prior to Bok's important editorship, to the days when was just a persistent, and annoying young autograph hound. In one, Barnum jokingly relents to Bok's pleas, writing, “...I find it impossible to shake you off... But life is too short to permit an ever-busy man like me to write letters to strangers...I cannot do it. The idea of a man in his 72nd year called upon to write letters about nothing! Why the thing is perfectly preposterous! I shan't do it!” In a later letter, Barnum congratulates Bok's “Extraordinary & sometimes no doubt annoying persistence” in collecting autographs, quite an accomplishment for someone just 19. He then adds, “Meanwhile I sympathize with the sick, lame, halt, blind, aged and decrepit victims to whom you will give no rest till they surrender...” Ironically, Barnum would later write for publications Bok edited, probably unaware that he was the annoying autograph hound. He even agreed to write a piece for a book Bok was publishing, but withdrew the offer when he realized who Bok was. He appears to have believed that Bok may have been more interested in collecting written documents than in publishing the book. Three years later, Barnum writes another letter concerning an article his wife wrote for Ladies Home Journal, now under Bok's editorship. $9,000.


Speaking of Mr. Barnum, item 49 is an 1853 broadside for The Aztecs in Mexico 1503. Don't believe a word of it. It advertised an appearance by the so-called “Aztec Lilliputians” at the Hanover Rooms in London. Maximo and Bartola were no more Aztecs than you or I. They were two poor San Salvadoran children who suffered from microcephaly, where the head is unusually small and slanted, the body usually small too, and intelligence generally limited (the vernacular for the condition is “pinhead”). The children were taken from their poor home and sold to an American named Morris, who put them on display. Morris made up this story that they were from a lost Aztec city, the last of their race, revered by their people as Gods. From Morris, they would wind their way to P.T. Barnum's museum and his traveling shows. Amazingly, most people believed the story. Didn't Barnum say there's a sucker born every minute? (actually, apparently not, though most people believe he did). The pair (they were brother and sister) were taken to the White House to meet President Fillmore, and later Queen Victoria and numerous princes of Europe. Oddly, it is unknown whatever became of them, though it is believed they survived at least until the late 19th century, and probably into the 20th. $1,500.