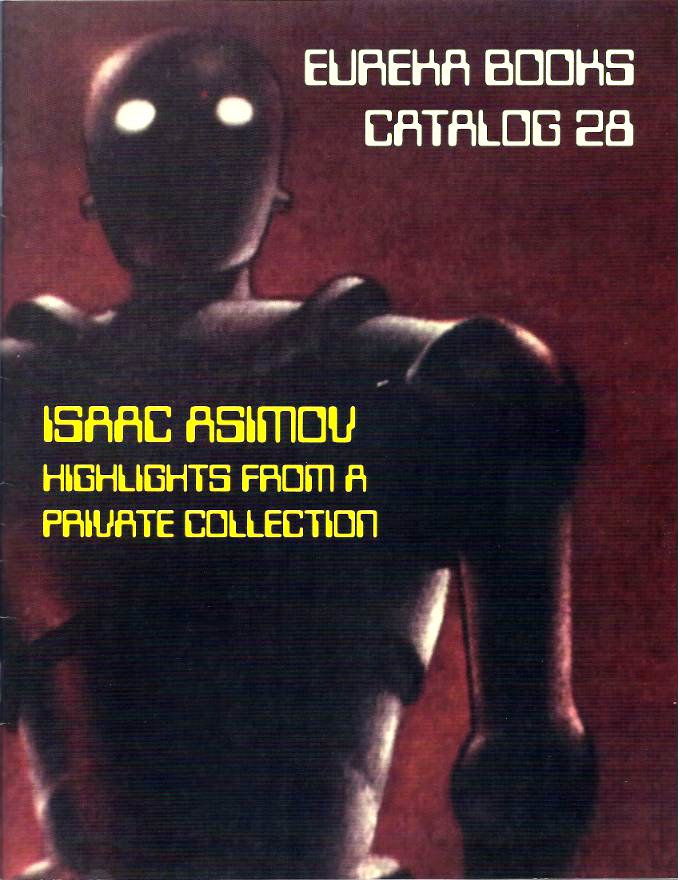 There aren't all that many authors who rate a single-author catalogue. One who does is Isaac Asimov. Eureka Books, of Eureka, California, has created just such a catalogue. It's title is Isaac Asimov, Highlights from a Private Collection. It contains 175 items, but even if each was unique, it wouldn't come close to covering all of the books the prolific Asimov created. He is credited with writing or editing over 500 books.


Most people associate Asimov with science fiction, and certainly that is the best known aspect of his career. Nonetheless, no one could write 500 science fiction novels without becoming overly repetitive. Asimov wrote much more, some closely related to his specialty, other books far afield. Many of his other titles were scientific, science without the fiction. Many of these were targeted to youth, helping to instruct the young in the ways of science. However, much of Asimov's body of work is totally unexpected. Asimov wrote books of limericks and jokes to tell to audiences. He wrote much history, including lengthy histories of the United States. He also wrote a history of the Holy Land. He provided detailed annotations on several works by others, from Gilbert and Sullivan to Milton's Paradise Lost. He was a Shakespearean scholar. In the 1950s, he was also a professor of biochemistry at Boston University, though he gave that up to concentrate on his writing. With all of his books and research, he certainly must have needed to work at that full time.


Asimov began writing short stories, primarily science fiction, in 1939, when he would have been around 20 years old (Asimov was born in Russia and not even he knew exactly when). However, it would not be until 1950 that his novels began to appear. Eureka Books' catalogue, which proceeds in chronological order, begins in this year. He continued to write for the rest of his life, which lasted until 1992, when he was probably 72 years of age. However, numerous posthumous collections and other works have continued to be published in the years since his death. We will now take a look inside the catalogue for a few of the items being offered.


Item 5 goes back to the first year that Asimov's work began appearing in book form - 1950. It is a first edition of what is still one of his best known works, I, Robot. Eureka notes that this is a fine, maybe even very fine copy in a fine dust jacket. The book was not written in 1950. It is actually a collection of nine short stories he wrote for science fiction magazines between 1940 and 1950. The stories introduced what would become the basis of all of Asimov's robot stories, his “three laws of robotics.” Asimov grappled with the concept of what rules a robot would have to follow to be useful, even safe, for mankind. He understood that robots could not be allowed to make decisions based on their own rules, or they could be destructive to humans. You know the story – robots gone wild ruling the world. Basically, the rules that would have to be inculcated into the robots' brains were (1) robots could not harm humans and must protect humans from harm, (2) robots must obey human commands (unless those commands conflicted with #1), and (3) they must preserve their own existence, provided that did not conflict with 1 or 2. This may sound straightforward, but robot ethics can be as difficult to enunciate as human ethics. Asimov would later realize that overarching all of these concerns was protecting humanity. For example, the ethical decision of Hitler's robot would have been to kill the SOB, even though that violates rule 1, but determining whether an action was a benefit to mankind is generally a more speculative decision than simply knowing not to kill people. That's a a taxing decision for any robot (or human) brain. Priced at $7,500.


It looks like by the latter part of his career, Asimov had written so much science fiction material that he had to reach for new topics, such as The Science Fiction Weight-Loss Book. Actually, this is not what it appears. It is not yet another useless fad diet book. It is a collection of science fiction stories, often humorous, featuring characters with various weight-related issues, such as obesity or its opposite. Asimov didn't write any of the stories. He, along with Martin Greenburg and George Martin, edited the book. However, it does include some notable authors, including Stephen King and H.G. Wells. While Asimov did not write the stories, he did sign this copy of the book. Published in 1983. Item 113. $150.