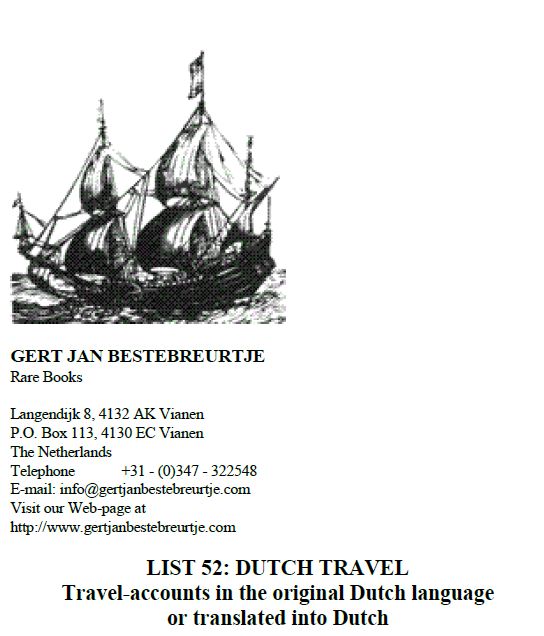 Gert Jan Bestebreurtje Rare Books has issued a catalogue of Dutch Travel. Travel Accounts in the original Dutch language or translated into Dutch. Naturally, most items in the catalogue would be particularly appealing to those with some familiarity with the Dutch language. However, as would be expected of a travel catalogue, items deal with many places in the world, usually far away from the Netherlands. Collectors of early voyages and other travels may find items published in Dutch are important pieces of collections not particularly tied to the Netherlands or the Dutch language. That is obviously the belief of the cataloguer, as the descriptions of the works offered are in English. Here are a few samples of these books and other printed pieces.


Item 38 is one of the earliest looks at Greenland, Historie van Groenland by David Cranz. Cranz was part of the Moravian Brethren who, for whatever reason, picked Greenland as a place to seek converts. Perhaps competition there was not so stiff. He stayed from 1761-62, and while there is not a lot of exciting things going on in Greenland, he was able to learn enough about the customs of the people and about whaling to fill three volumes (in one). Offered is a first Dutch edition from 1767, which Bestebreurtje notes has more and better plates than the original 1765 German edition. Priced at €1,250 (euros, or approximately $1,656 U.S. Dollars).


Item 26 is Op reis naar het onbekende, a 1925 account of a journey to the Caribbean and Central America by Lady Richmond Brown. It was a hair-raising trip to hear her tell. A contemporary account describes it as recounting “struggles against pestulence and famine, her encounters with savage men and beasts, her narrow escapes from death in scores of ways...” Mable Richmond Brown was the wife of Lord Richmond Brown, an enormously wealthy man whose wealth she enjoyed. She set off on her journey accompanied by F.A. Mitchell-Hedges, an archeologist, charlatan, or perhaps both. He too would later write of the extreme dangers, though leaving her out, they having split. Later claims have been made that neither experienced any such hardships, and grossly exaggerated their dangers. Whatever the truth, Lady Richmond Brown financed the expeditions (there were more) lavishly, at one timing leasing 70,000 acres in Central America for 20 years so Mitchell-Hedges could search for treasure. Her wealthy husband later sued for divorce, naming Michell-Hedges, but in time, M-H secretly married another, and when Lady Richmond Brown found out, their relationship was over. That explains Mitchell-Hedges writing her out of his later accounts. It was all very sordid and fake, but this book tells it the way the wealthy Lady wanted us to believe when her adventures and romance were still young. €45 (US $59).


Father Pierre de Smet, a Belgian priest, came to America in 1837 as a missionary to the western Indians, but he did much more than just teach theology. He also taught practical skills such as farming techniques and how to try to coexist with the white man (a losing battle). In 1845, he undertook a trip to the far west - Oregon. Actually, he visited more than Oregon, his route taking him up into Canada as well. His mission was to meet several tribes he had not encountered in his previous work and at this he was successful. Once he returned, he wrote about his discoveries, and item 172 is the first Dutch edition of this book, published in 1849 – Missien van den Oregon... €575 (US $761).


Item 36 is a rare, major compilation of early Dutch voyages: Begin ende voortgangh van de Vereenighde Nederlantsche Geoctroyeerde Oost-Indische Compagnie (Beginning and development of the Dutch East India Company). The Dutch East India Company was formed in 1602, and the 21 voyages covered in this book range from slightly before to slightly after that date. There are also some circumnavigations here, meaning they explored beyond the boundaries in which that company operated. There are 21 volumes, one for each voyage, and the set offered is the 1646 third and what Bestebreurtje describes as the “best” edition. About half of the material was new, author Isaac Commelin evidently getting access to unpublished material belonging to the company. The accounts are extensively illustrated. €68,000 (US $90,084).


Item 56 is the first Dutch edition of a French anti-slavery piece, first published the preceding year (1789): De zaak der negerslaaven, en der inwooneren van Guinéa. Author Benjamin Frossard considered slavery a violation of the rights of man, Christian morality, peace, public order, and everything else good. He felt it needed to be eliminated. Nevertheless, he was not an abolitionist either. He believed in a gradual change, both so slaveholders could be compensated for their property, and because he thought the slaves would be shiftless and resort to crime. The result was he believed ending slavery would take a century to accomplish. €750 (US $993).