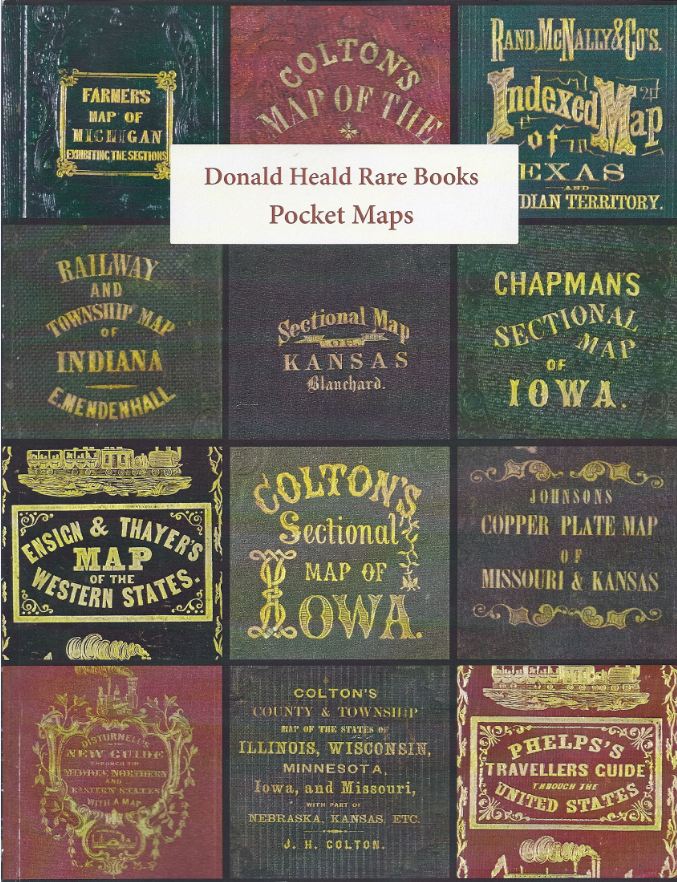 Donald Heald Rare Books has issued a catalogue of Pocket Maps. These are 19th century American maps, generally used by travelers, shippers, and settlers as they made their way around the country in times when travel was slower and more complicated. Many show the routes of their day, generally rivers and canals in the early part of the 19th century, railroads and stage lines a few decades later. These maps usually folded out from hard covers that protected them. Today's automobile road maps are essentially disposable, readily available, inexpensively replaced. These were meant to last through long journeys and needed protection. While meant to show people the way at the time, today these maps provide a graphic history of the expansion and development of America. Now, geographical boundaries are mostly constant. In the 19th century, they were constantly changing. These are a few of Heald's old pocket maps.


Item 3 is the 1833 (second edition) of Mitchell's Travellers Guide Through the United States. A Map of the Roads, Distances, Steam Boat & Canal Routes. Of course, the United States was not so large then, but it covers everything from the east coast to the Missouri Territory, and shows the edge of Texas (then part of Mexico). Otherwise, except for the northern part of Maine and the southern tip of Florida, it is all there. The index includes information about steamboat and canal routes along with various statistics. Priced at $1,000.


By 1849, the means of transportation was rapidly changing. That is when this 70-page guide with a large fold out map of the United States was published: Phelps's Travelers' Guide through the United States; Containing Upward of Seven Hundred and Fifty Railroad, Canal, Stage and Steam Boat Routes. The map covers the same states, with northern Maine and southern Florida clipped off (they are shown on insets), but another inset now shows the states and territories to the west, all the way to the Pacific. This came just after the conclusion of the Mexican War, so California and a Texas much larger than today are included (Texas borders on California), though the Mexican border was farther north than it is today (this is pre-Gadsden Purchase). The map is bordered by images of American presidents and other important figures. As the title indicates, the transportation routes now include railroads, rapidly expanding at this time. Item 4. $1,250.


Item 21 is Anthony Findley's pocket map of Tennessee. It dates to around 1830. It shows towns, roads and rivers, with counties identified, except for the southeast corner, which is labeled “Cherokee Indians.” Those who grew up as fans of Davy Crockett will appreciate this map, as this is the Tennessee he represented in Congress, shortly before moving on to Texas. $750.


Item 24 is J.M. Atwood's Map of the Western States. The western states were not what they are today in 1853. They range from Ohio to Iowa, what we would consider the midwest now. The map provides detailed county breakdowns, and is preceded by a guide which includes railroad, canal, state and steamboat routes. $800.