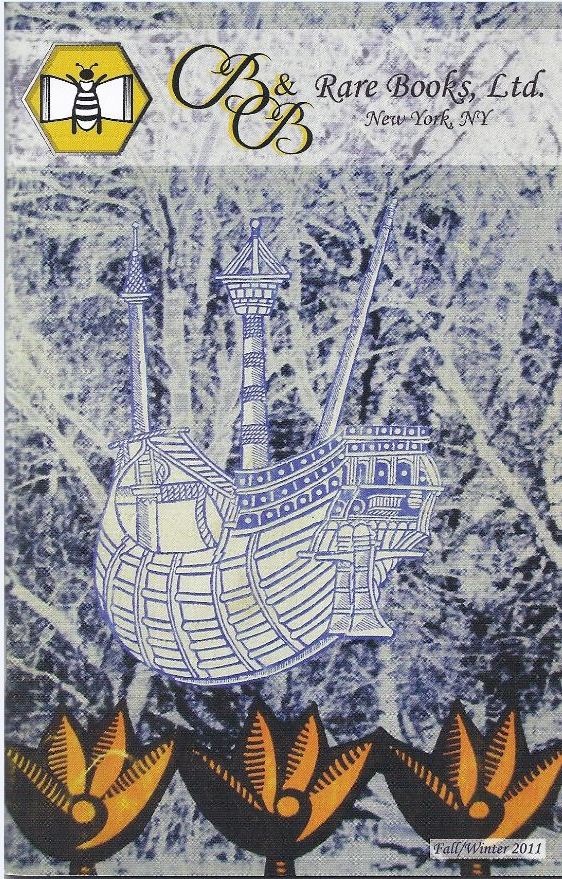 We have received, perhaps slightly late, the Fall/Winter 2011 catalogue from B&B Rare Books of New York. B&B describes its specialties as “18th-20th century American and English literature, poetry, mystery, and detective fiction, and early 20th century children's literature.” We will add that many items within this catalogue are signed or inscribed. The catalogue also notes that “B&B” are Joshua Mann and Sunday Steinkirchner. Hm... hard to figure that one. Maybe bookseller and bookseller? Well, let's take a look inside at a few of the books B&B is offering.


Henry David Thoreau is a man hard to peg by today, or even his own day's standards. Perhaps iconoclast is as close as we can come. He was certainly one of the earliest environmentalists, and a vehement supporter of abolition. That might place him on one side of today's political spectrum, but he was also a strong individualist, a man who appreciated being left alone, and wanted as little government involvement with his life as possible. His individualist/environmentalist nature can be found in his most famous book, written while he isolated himself from most of society: Walden; Or, Life in the Woods. One can only imagine how he might feel about Walden Pond today, where civilization has long since eroded any sense of being alone. Item 67 is a first edition of Thoreau's premier book, published in 1854. Priced at $13,500.


A man who inhabited a world as different from Thoreau's as night and day was F. Scott Fitzgerald. He aspired to the world of the beautiful people in the 1920s and made it there on the strength of his writing. With the 1930s, life became tougher for Fitzgerald. His wife drifted off into insanity, his financial fortunes never quite kept up with his needs. He turned to screenwriting in the late 1930s to supplement his income, and that gave him the insights into Hollywood that provided material for his final novel, The Last Tycoon. Item 20 is a first edition, first issue from 1941. The novel is unfinished. Fitzgerald, whose heavy drinking had ravaged his health, suffered a heart attack and died in late 1940 at the age of 44, his last novel as yet incomplete. $4,000.


When Charles Lutwidge Dodgson, better know to most by his pen-name Lewis Carroll, first published his tale about Alice and her adventures in Wonderland in 1865, he was essentially an unknown photographer and mathematician. Two decades later, he was a very popular writer, appreciated by both children and adults for his story about Alice and her illogically logical world. It was at that time that Carroll came up with the idea of publishing a facsimile edition of his original manuscript of Alice. This he had published in 1886, using what had been his original title for the book, Alice's Adventures Under Ground. Item 8 is a copy of this facsimile book, inscribed, as he usually did, “from the Author,” in purple ink. $6,000.


Item 38 is an advance issue of Ernest Hemingway's 1950 novel Across the River and Into the Trees. It is one of 25 copies bound for presentation. This one was inscribed and presented by Hemingway to journalist Ben Meyer, who had traveled to Cuba to interview Hemingway. The inscription is dated “21/8/50,” three weeks prior to the book's publication. Meyer had written that Hemingway was quite pleased with how this book turned out, though the critical reviews were not very supportive of the author's view. Hemingway evidently remained in contact with Meyer over the years, as this copy of his book comes with a letter from Mary Hemingway to Meyer in 1958 thanking him for some photographs. $50,000.