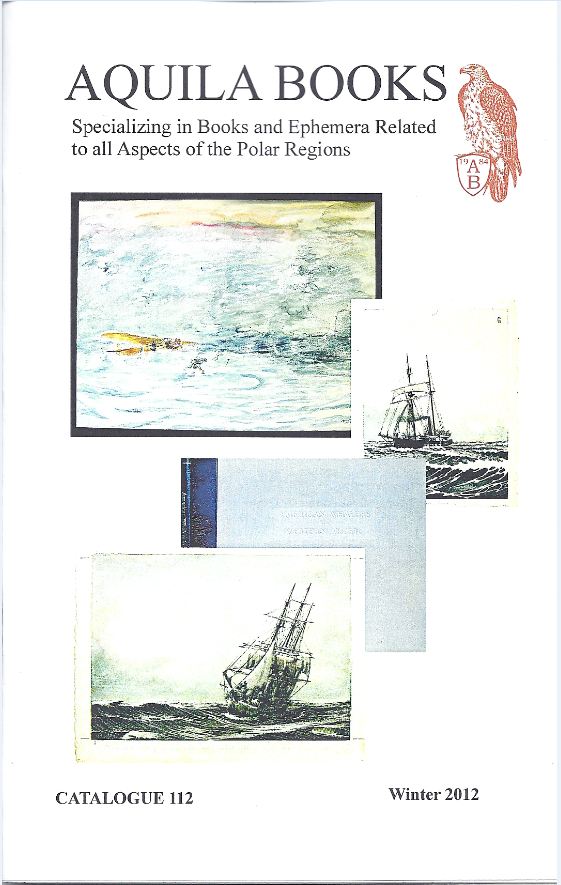 Aquila Books has released its first catalogue of 2012, Catalogue 112 or Winter 2012. It has been a couple of years since their last, so this will be a welcome sight for those who collect all places cold. Aquila's specialty is the polar regions, places few if any humans inhabit. In other words, most of these books are about travels and voyages, as people generally reach these places strictly to explore. The common thread that runs through the expeditions is hardship, climates so unpleasant it is a wonder anyone goes there. Still, they go. Fortunately, we can read about their adventures from the warmth and safety of our homes. It is much more pleasant this way.


We will start with a trilogy of books from Arctic and polar explorer Frederick Cook, one of the more interesting individuals to trek through the ice. Cook was a brave explorer whose claims came to be questioned, and eventually just plain disbelieved. The numbers just didn't add up. We first read about Cook in the Belgian expedition of the late 19th century. Cook wrote about it in Through the First Antarctic Night 1898-1899, published in 1900. Cook was the surgeon, and he was credited with saving many lives. One of his admirers from that journey, even through troubled later times, was Roald Amundsen, who would be the first to reach the South Pole a dozen years later. Item 28 is a first British edition of Cook's account. Priced at $1,500.


We next hear of Cook in two attempts to scale Mt. McKinley in Alaska. He traveled to the area in 1903 and 1906, and claimed to have reached the top on his second expedition. He published his claims in 1908 in his book To the Top of the Continent... The First Ascent of Mt. McKinley. Few questioned the veracity of his claims at the time. That would come after a protracted dispute with Robert Peary over who first reached the North Pole. Cook's questionable claim about reaching the pole would lead to a reexamination of his claim to reaching the top of McKinley. Suffice it to say that later examinations of his photographs and maps, and statements by others on his journey, have made the basic premise of this book questionable. Item 28. $675.


Cook's veracity would come into serious question as a result of the assertions found in his 1911 book, My Attainment of the Pole. Charts, timing, and testimony by the two Inuits who accompanied him led most people to believe that Cook's claim was mistaken if not fabricated. His assertion was challenged by Robert Peary, who also claimed to be first to reach the North Pole, though his asserted date was later than that of Cook. Peary's claims are generally accepted, Cook's not, though Peary's claim has also come under serious challenge in more recent years. Item 27 is a scarce first edition of Cook's account. $950.


If Peary's claim is true, then Matthew Henson was co-first man to reach the North Pole, as he accompanied Peary all the way to the end of the trail. However, Henson, unlike Peary, was given little credit for his achievement. Nor did Henson's account, published in 1912, sell many copies. The title explains Henson's problem: A Negro Explorer at the North Pole. In 1912, few people were willing to give a black man much credit for anything, so while Peary received much adulation, Henson received almost none. Nonetheless, Henson was the one man that Peary trusted enough to accompany him all the way to the North Pole (assuming, of course, he actually reached that destination). Item 48. $4,000.


Roald Amundsen had also thought of attempting to be first to the North Pole, but after Cook and Peary's claims, he concluded he was too late. He turned south, making his assault on the South Pole. The Norwegian explorer found himself in competition with British explorer Robert Falcon Scott, but Amundsen's better preparation, and head start, enabled him to reach the South Pole first. He was careful to avoid the controversy experienced by Cook and Peary by carefully charting his route, and leaving evidence at his destination. Amundsen's account is undisputed. While it was published shortly after his return in 1912, it was not until 2010 that the first edition of his diaries was published. Item 3 is The Roald Amundsen Diaries: The South Pole Expedition 1910-1912. Amundsen kept a daily diary of his voyage to Antarctica, setting up time, and overland trip to the pole and back, making this an exciting, as it happened account. $45.


Here is a rare item that will appeal to all those who like auto travel. It is a privately printed piece pertaining to the most challenging long road in North America, the Alaska Highway. The highway, over 1,500 miles in length, was built in a rush during the Second World War. The idea was to be able to provide supplies to Alaska, thought at some risk to the Japanese, though it is hard to imagine why they would have wanted Alaska. For those who wonder why it can take years to fix a street in your town, you may be amazed by the feat of the engineers and workers in constructing this long highway through difficult terrain and a long, brutal winter in just 18 months. Of course, this was not a modern superhighway. Most was unpaved until many years later. Still it provided a connection from where the roads previously ended in British Columbia, through the Yukon and into Alaska, where it connected to other previously existing roads. Item 2 is titled Lower Post or Freeze 340th Engineer Regiment on the Alaska Military Highway 1942-1943, published in 1944. It was printed in a small number of copies for the engineering regiment, no copies being offered for sale. It is marked with a sticker, “Warning to Receiving Party Due to Censorship restrictions, this book can not be sent out of the United States.” Someone ignored this warning as it is now being sold by a Canadian bookseller. $525.