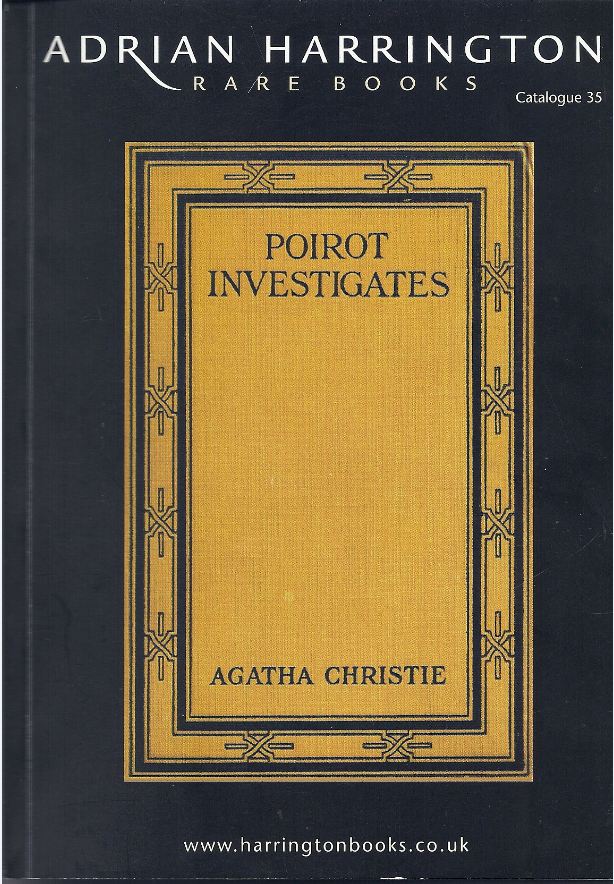 This month we received our first catalogue from Adrian Harrington Rare Books. However, this is Catalogue 35 for the London bookseller. Adrian Harrington has been selling books for 40 years now, which certainly qualifies one for accolades such as “venerable,” “estimable,” and the like. Perhaps, honorable, or as they say in England, “honourable.” Their location may indicate somewhat the source of the material, but it is hardly exclusive. After all, who would expect a London bookseller to be offering a collection of material with items relating to Abraham Lincoln and Andrew Johnson from a man who was present at Ford's Theater when Lincoln was assassinated? Harrington does specialize to an extent in literature, modern first editions, children's books, and in the case of this catalogue, much in the way of mystery and detective fiction. However, as the Lincoln items attest, you can find just about anything here. So, let's take a look.


We will start with the material connected to President Lincoln. It includes several appointments to various military ranks received by Captain John Bolton. One, dated August 1, 1864, is signed by Lincoln. Another is from President Andrew Johnson, though it is not certain whether it is an actual signature or stamped one. There is also a copy of Osborn Oldroyd's 1901 book Assassination of Abraham Lincoln, and a 1914 letter from Oldroyd to Bolton asking his recollections from the assassination. Bolton was on duty at Ford's Theater that terrible night. According to his family, he was awaiting news on his application for a position with Lincoln's personal security team. The President could have used him that night. Item 133. Priced at £12,500 (British pounds, or roughly $19,751 U.S. dollars).

When you have written what was probably the most important scientific work of its century, what do you do for an encore? Here is the answer. Charles Darwin's On the Origin of Species totally changed everything we believed about ourselves and how life on earth came to be as it was. There are few books that changed the world as dramatically as this. Item 55 is Darwin's next book, published three years later in 1862: Fertilisation of Orchids. Admittedly, it is not of as monumental importance as his previous title, but it does show Darwin further developing his theory of natural selection, the key factor that differentiated Darwin's view of evolution from earlier ones that assumed some sort of divine force was driving organisms to change. £2,750 (US $4,345).