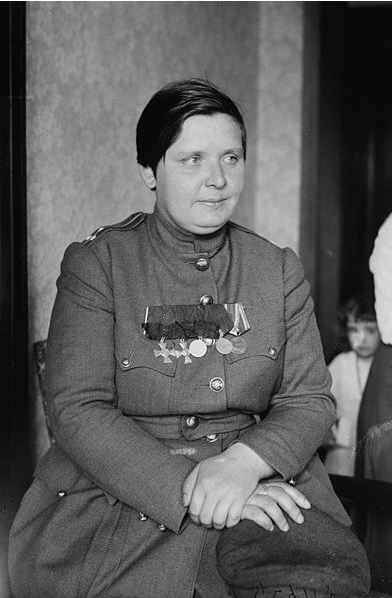 Here is the story of a woman far braver than Rev. Dodd, but who ultimately suffered a similar fate. Maria Bochkareva was a Russian peasant woman who managed to convince the Tsar to allow her to serve in the military. She fought bravely, was wounded, and next was permitted to form a women's unit, the Russian Women's Battalion of Death (what a great name!). The unit served in battle during the First World War, but this was also the period of the Russian Revolution and the abdication of the Tsar. Botchkareva served the White Russian government that came to power, only to be captured by the Bolsheviks on returning from the front lines. She would have been executed except for a friendly soldier securing her release. She left Russia, arriving in the U.S. in 1918. Miss Bochkerova was evidently a convincing woman, securing an audience with President Wilson, and gaining sympathy for the White Russian Cause. It was while in the U.S. that she secured the assistance of American writer Isaac Don Levine, and they cooperated to write this book: My Life as Peasant, Exile and Soldier. By Maria Botchkerova, Commander of the Russian Women's Battalion of Death... She next traveled to England, where she got further support from the King, and then returned to Russia, to fight for the Whites. Once again, she was captured by the Bolsheviks, and this time they were not as understanding. Maria Bochkareva was put to the firing squad in 1920. Item 5 is a first British edition of her story, published in 1919. $280.


Item 27 is a manuscript, an anonymous, unfinished, unpublished poem. It has been waiting at least two and one-half centuries for someone to complete it. This is an extraordinary opportunity for one with a good knowledge of early 18th century Russia. The poem is titled La Russiade. It is one of those epic poems you no longer see. There are 178 pages, including a 28-page outline and a first canto of over 500 lines. The poem celebrates Peter the Great's victory over Sweden in 1709. Most people are not aware that Sweden was once a great military power, but that is because its power ended at Peter's hands three centuries ago. It hasn't been the same since. This homage to Peter and Russia was to be “France's tribute” to the Empress Elizabeth on the marriage of her son, Peter, to Catherine (that occurred in 1745). Peter would reign for but a few months as Peter III, but his wife would rule for 34 years as Catherine the Great. $12,000.


Item 21 is an odd broadside printed in three languages, English, Italian and Greek. It announced an odd sort of monument in a proclamation by Tsar Alexander I. It came after the French invasion of Russia in 1812. Napoleon drove his troops all the way to Moscow, the Russians in constant retreat. Finally, with the French ready to take over the city, the Russians outsmarted their foes. Rather than surrendering and being forced to provide food and shelter for their captors, the Russians torched and abandoned their city. The French had Moscow, but they lacked sufficient food and shelter, and it being September, the Russian winter was coming soon. Napoleon was forced to abandon Moscow and enter full scale retreat. This broadside includes quotes from the Tsar, and announces that a column will be constructed from the 1,131 canons the French abandoned in their retreat. It certainly would have made an amazing sight, but the column was never built, and Beattie was only able to find one other reference to the idea. $1,900.