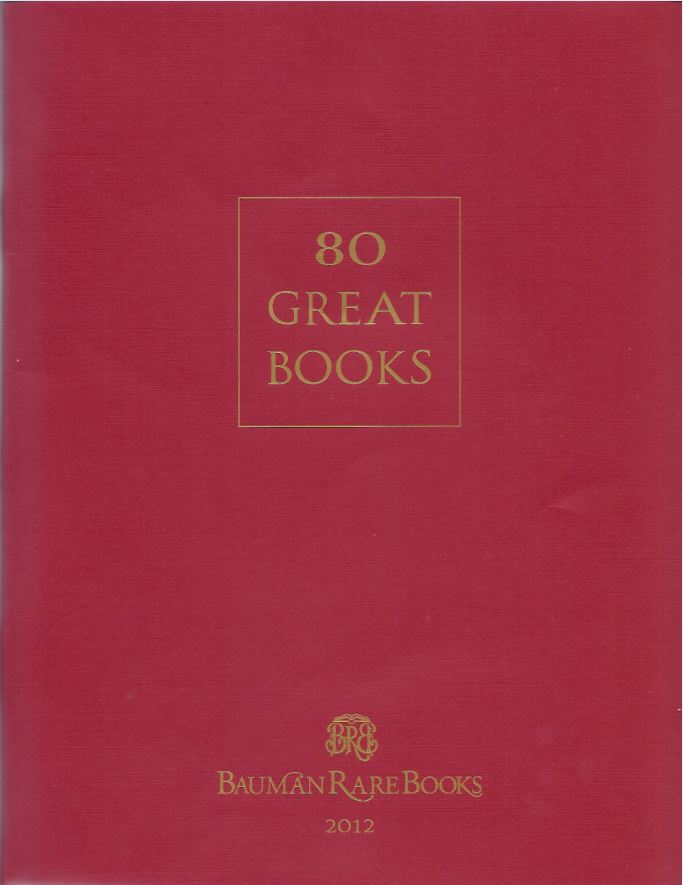 Bauman Rare Books has issued a catalogue of 80 Great Books. Actually, there are 83 of them offered, a bonus for those who view this collection. They come in all types, fiction and nonfiction, antiquarian and 20th century, American and European, the connecting link being greatness. There are pioneering works in science, discovery, politics, and simply great writing. These are books and authors most, if not all, you will know. Here, now, are a few.


We will start early. Item 10 is a work of incunabula, Liber Chronicarum, published in July 1493. This is the first edition, the one in Latin, of what is best known as the Nuremberg Chronicle. Author Hartmann Schedel wanted to provide a history of the world, from all the way back to Creation to the present, and one that gave due respect to German contributions. Schedel even went farther, foretelling the destruction of the world and judgment day. His work was the greatest illustrated book of the first century of printing, and one of the greatest ever. It contains 1,809 printed woodcuts taken from 645 different blocks. These were created by the artists Michael Wolgemut and Wilhelm Pleydenwurff, with help from their young assistant, Albrecht Durer. This copy has the portrait of Pope Joan intact (in most copies, the image of the mythical female pope has been blotted out). It also features the first modern map of Europe, and Ptolemy's world map, as the world was known at the dawn of the Age of Discovery. Priced at $145,000.


Next we have one of the great works concerning government, The Federalist: A Collection of Essays, Written in Favour of the New Constitution, published in 1788. Representatives of the former American colonies met in 1787 to hammer out a constitution to create a union of those separate entities. Each was reluctant to let go of power, yet they needed each other to survive in a world dominated by European powers. The Constitution they came up with was a masterful document, providing for balances of power, a republican form of government, and a Bill of Rights. Still, many were concerned about ceding power to this new federal government, and New York was among the reluctant. Alexander Hamilton, a supporter of the Constitution, convinced two others of a like mind, John Jay and James Madison, to work together on a series of essays to convince New Yorkers to support the plan. The result was The Federalist, and though it was not a best-seller (several hundred of the print run of 500 were still unsold after ratification), it was still very influential, and outside of the borders of New York as well. Thomas Jefferson described the book as, “the best commentary on the principles of government which ever was written.” Item 2. $260,000.


The aforementioned Mr. Jefferson would make the most of the new federal powers a few years later when, as President, he would authorize the purchase of the vast western territory then known as “Louisiana.” However, no one knew much about the outer reaches of this new territory, so he sent Meriwether Lewis and William Clark out to explore the land. It was the greatest journey of exploration ever conducted within the United States. The explorers set out up the Missouri River, all the way to today's Montana, crossed the Rocky Mountains, and traveled down the Columbia River to the Pacific coast. By the time they returned two years later, they had learned much about this wild territory, its inhabitants, and had set the seeds for American claims to the Pacific Northwest, which were not really a part of what the French considered Louisiana. Though the explorers returned in 1806, it took agonizingly long to finish their official report. Lewis killed himself, leaving it to Clark to finish the task. Item 16 is a first edition of the official account, published in 1814: History of the Expedition Under the Command of Captains Lewis and Clark. This copy includes the rare large folding map. $195,000.


In 1845, Ralph Waldo Emerson called for a truly American poet to depict the land in poetry. It took ten years, but the then unknown Walt Whitman responded in 1855. His poetry collection, whose publication Whitman carefully supervised, even doing some of the typesetting himself, was titled Leaves of Grass. Many consider it the most important American poetical work ever published, and Emerson highly praised it as the greatest contribution to American poetry. This first edition is a scarce find. Item 29. $165,000.