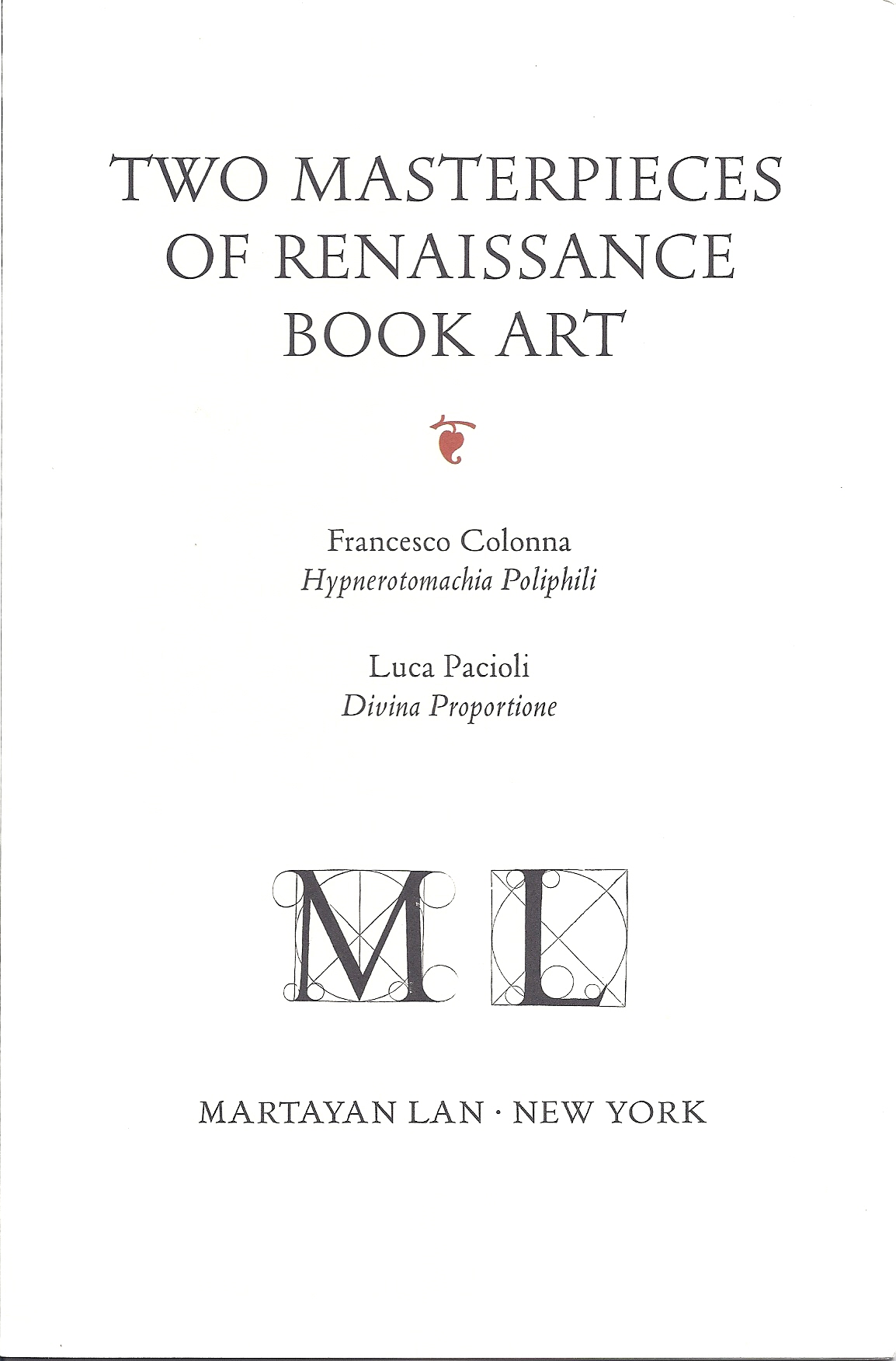 Once in a while, we come across a single item sale. Martayan Lan has not issued such a catalogue, but it has printed the next best thing: Two Masterpieces of Renaissance Book Art. These are two works that cross the boundaries between architecture and science, and art. One is a scientific and mathematical presentation, the other a work of romantic fiction. Nevertheless, both are greatly focused on architecture, and each is most notable as great works of book art. One qualifies as an item of incunabula, the other just misses. Each is unquestionably one of the great printed works of five centuries ago.


First we have Divina Proportione, by Luca Paciola, published in 1509. The author was a mathematician, and in the world he saw mathematical proportions everywhere, so much so that he considered them divine (hence the book's title). His view was that proportional forms were shared by many things, from the human body to architecture to even printed letters. Paciola expands on Vitruvius' claim that the human form fit perfectly into a square and circle (the two most perfect geometric shapes), to show that the letters of the Roman alphabet did the same. He provides the illustrations to prove his point.


However, what makes many of the illustrations in this book of greatest significance, beyond their artistic appeal, is the source. Paciola was a good friend of Leonardo Da Vinci, and 61 of the illustrations come from the master's hand. This is the first collection of drawings by Da Vinci to make it to print, and the only set published during his lifetime.


This copy is bound in 19th century red morocco. It contains the ex-libris bookplate of Robert Hoe. That is appropriate for a fine printing, as Hoe made his fortune in the printing press business during the 19th century. When his collection was auctioned after his death, it was by far the most valuable American book collection ever to come to sale.


The second item offered is Hypnerotomachia Poliphili, by Francesco Colonna. The author's name is not given, but has been revealed through acrostic reading of the first letters of the chapters that spell out Friar Colonna's name (a few scholars have attributed authorship to others). This book was published by Aldus Manutius in 1499, the only illustrated book produced by Aldus.


Prices for these two books are available on request.