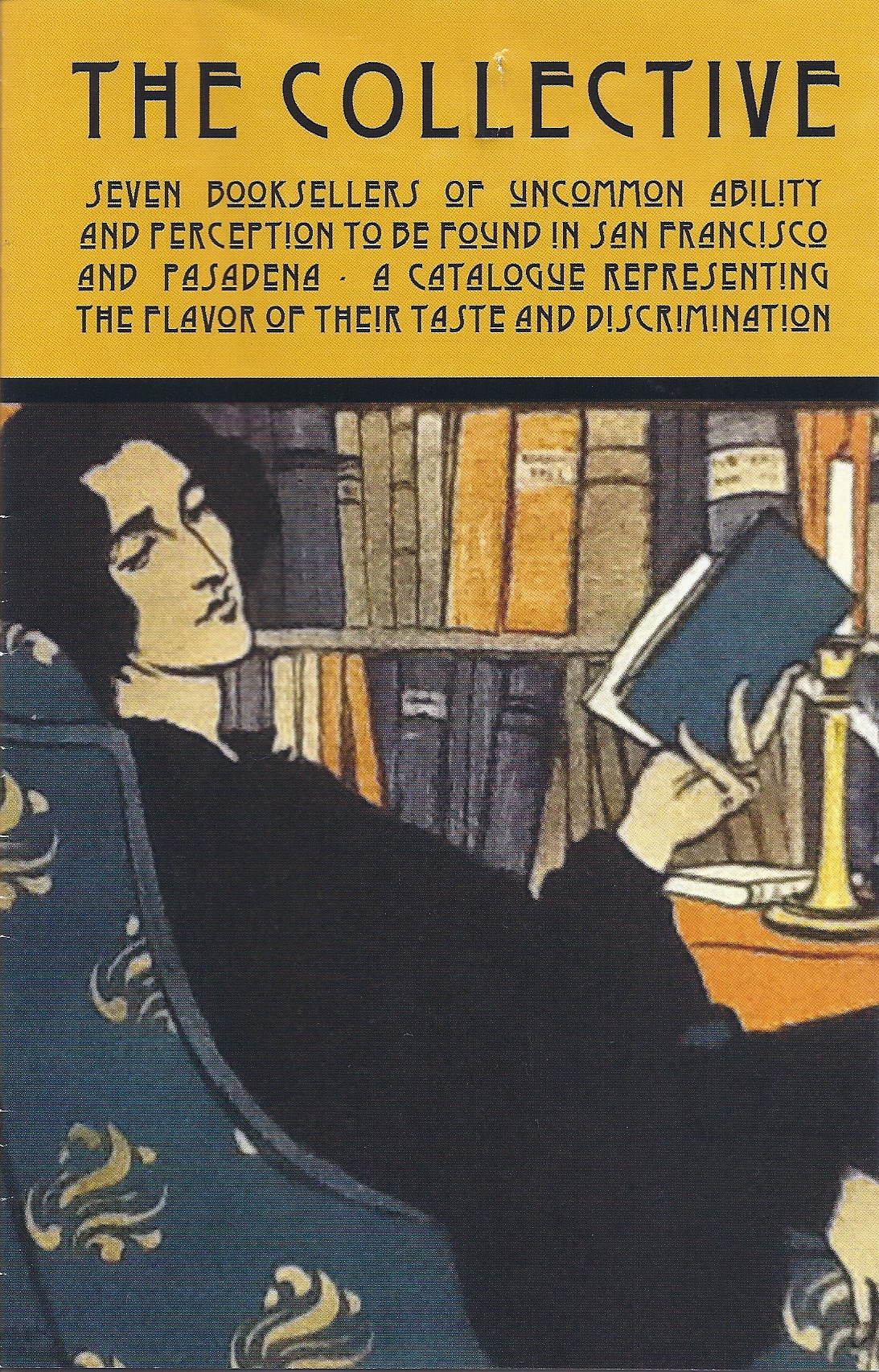 We have received an unusual catalogue, with the heading The Collective. It is not a large catalogue, and yet it contains the offerings of seven different booksellers. They have combined efforts to present a brief look at what they sell, and invite customers, old and new, to visit them at one of the two upcoming California book fairs. From February 4-5, there is the San Francisco Antiquarian Book Print & Paper Fair, and in Pasadena from February 10-12 there is the 45th California International Antiquarian Book Fair sponsored by the ABAA. Each of the seven will be exhibiting at both fairs. And, if you cannot attend, you are still invited to contact them about what they have to offer.


From Tavistock Books, we have the manuscript from John Steinbeck for his 1949 story chronicling a young child's concerns about his absent father. It consists of four legal sheets, with 3 ½ pages filled with Steinbeck's writing. The article appeared that year in Reader's Digest under the title His Father (the text of that piece varies some from the original manuscript). The semi-autobiographical piece was written at a difficult time in Steinbeck's life. He wrote it shortly after his divorce from his second wife, Gwyndolyn. Priced at $27,500.


Book Hunter's Holiday offers an early, engraved broadside copy of the Emancipation Proclamation. Printed across the broadside is Proclamation of Emancipation, along with a portrait of Abraham Lincoln. It is followed by the text of the proclamation, and is signed in facsimile “A. Lincoln.” In very small type it states, “Entered according to act of Congress in the year 1864 by A. Kidder...” According to Eberstadt, Kidder's version was the only early reprint of the Emancipation Proclamation to feature Lincoln's image. $5,000.


Lux Mentis, Booksellers, presents Concert Room and Orchestra Anecdotes of Music and Musicians: Ancient and Modern, by Thomas Busby, published in 1825. The three volumes come in a fine, signed Root binding. The book represents forty years of the author's personal recollections and those of his friends, along with much consultation of other sources concerning music and musicians of the day, “interspersed with interesting and humorous anecdotes of these persons in public life and in retirement, amid the misfortunes that too often attend the spring-time of genius...” (The Monthly Review).


Here is a book for fans of auto travel from The Book Shop – On Sunset Highways: A Book of Motor Rambles in California, by Thomas D. Murphy. People used to ramble along California highways in the days before gridlocked freeways. Traffic was not much of a problem when this book was published in 1915. It is filled with images along the highways, presenting what The Book Shop describes as a “classic of California booster literature.” $750.


Fifth editions generally don't stack up to well in terms of desirability, but Ken Sanders Rare Books has one that is unique. This is a fifth edition (fourth American) of The Book of Mormon, published in 1842 (12 years after the first). What makes this special is that it is the only edition of The Book of Mormon published in Nauvoo, Illinois. Founder Joseph Smith and his followers had made their way from New York to Ohio and then Missouri where they found themselves almost at war with their non-Mormon neighbors. After many killings on both sides, the Mormons were driven across the Mississippi to Illinois, where they purchased a small town and renamed it Nauvoo. Life started out all right there, but in time, controversies arose involving Smith and his followers, dissidents within the Church, and outsiders. Smith was arrested and killed by a mob while in jail. His followers no longer felt safe in Nauvoo, and two years later, under Brigham Young, they began a massive exodus to Utah. The result is that this is the only edition of The Book of Mormon published in Nauvoo, Joseph Smith's final home, and the last edition published during his lifetime. $50,000.


Anthology Rare Books offers Tales of Swordfish and Tuna, by Zane Grey, published in 1927. You would expect cowboys and Indians, or gunslingers and lawmen, from Zane Grey, but swordfish and tuna? It turns out that while Grey was certainly a western man, the era of fighting Indians and invoking vigilante justice were in the past by the time Grey came along. He could write about them, and ride horses in the wild country, but Grey had another great love – fishing. He traveled all over the world to fish, and this book, signed by Zane Grey and inscribed by his youngest son, Loren, contains 86 photographs of his favorite pastime. Four original photographs used in the book are laid in. $5,000.


B&B Rare Books presents a copy of The Beautiful and Damned, the second novel (1922) by F. Scott Fitzgerald. This is an exceptional copy in a first state dust jacket. It is the story of a wealthy heir and his socialite wife, living the decadent life in the Roaring 20s. Some say the characters are based on Fitzgerald and his wife Zelda. Certainly, the drawing of the protagonists on the dust jacket looks much like Scott and Zelda. And, the two words in the title describe the Fitzgeralds well. $28,000.