American Imprints to 1800 From William Reese 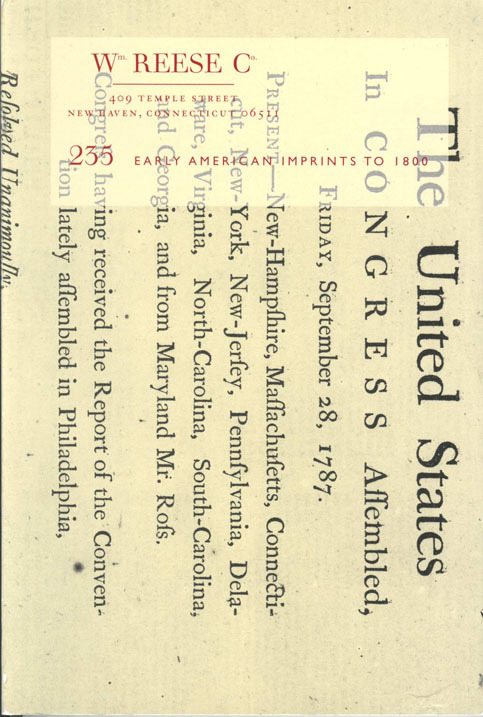 American Imprints to 1800 From William Reese

The William Reese Company's latest catalogue, "Early American Imprints to 1800," offers a wide selection of 18th century printed Americana. There are many items from the colonial period, Revolutionary War era, and the early days of the new nation. At one end we hear the stern voices of the Mathers, at the other, the liberal democratic views of Jefferson, and even early abolitionist works. America came a long way during that period, with the explosive change arriving in the last quarter century.

Speaking of those fun-loving Mathers, Cotton wrote the biography of his father when the latter died. It's called Parentator. Memoires of Remarkables in the Life and the Death of the Ever-Memorable Dr. Increase Mather. Who Expired. August 23, 1723. Parentator? Is that what Arnold Schwarzenegger's children call him? Increase must have been a tough guy all right, what with beating down all of those witches. Item 7. Priced at $10,000.

John Wise had a bit more progressive view of religion. In his The Churches Quarrel Espoused: or, a Reply in Satyre.... he counters the Mathers' attempt to concentrate ecclesiastical power in clerical associations. Wise promoted more power in the hands of individual churches, a position which Reese explains earned him the label "the first great American democrat." Item 3 is a second edition from 1715. $2,500.

William Currie counters Quaker pacifism in his book A Treatise on the Lawfulness of Defensive War, from 1748. It is a response to a book by John Smith in which the latter concluded the doctrines of Christianity and war could not be reconciled. Currie argues that war was permitted in the Old Testament and that Christian states would fall to slavery and oppression if not permitted to defend themselves. This 1748 treatise bears the printing imprint of one Benjamin Franklin of Philadelphia. Item 19. $10,000.

This pamphlet proved something of an embarrassment to Mr. Franklin a quarter of a century later. It is titled The Representations of Governor Hutchinson, and Others, Contained in Certain Letters Transmitted to England.... Thomas Hutchinson was the Governor of Massachusetts in 1773, and he did not have a very high opinion of the colonists, nor did they of he. In his letters back home, Hutchinson implored the British to use force against the restive colonists. Somehow, the letters got into the hands of Franklin, then colonial agent for Pennsylvania. Franklin made them available to colonial leaders in Massachusetts on the condition they not be made public. Instead, they were published in the Boston Gazette, and later as pamphlets. Franklin was reprimanded and embarrassed, but the result of the publication of the letters was deepening hostility toward British authority and the flight of Hutchinson from the colonies. Item 49. $2,500.