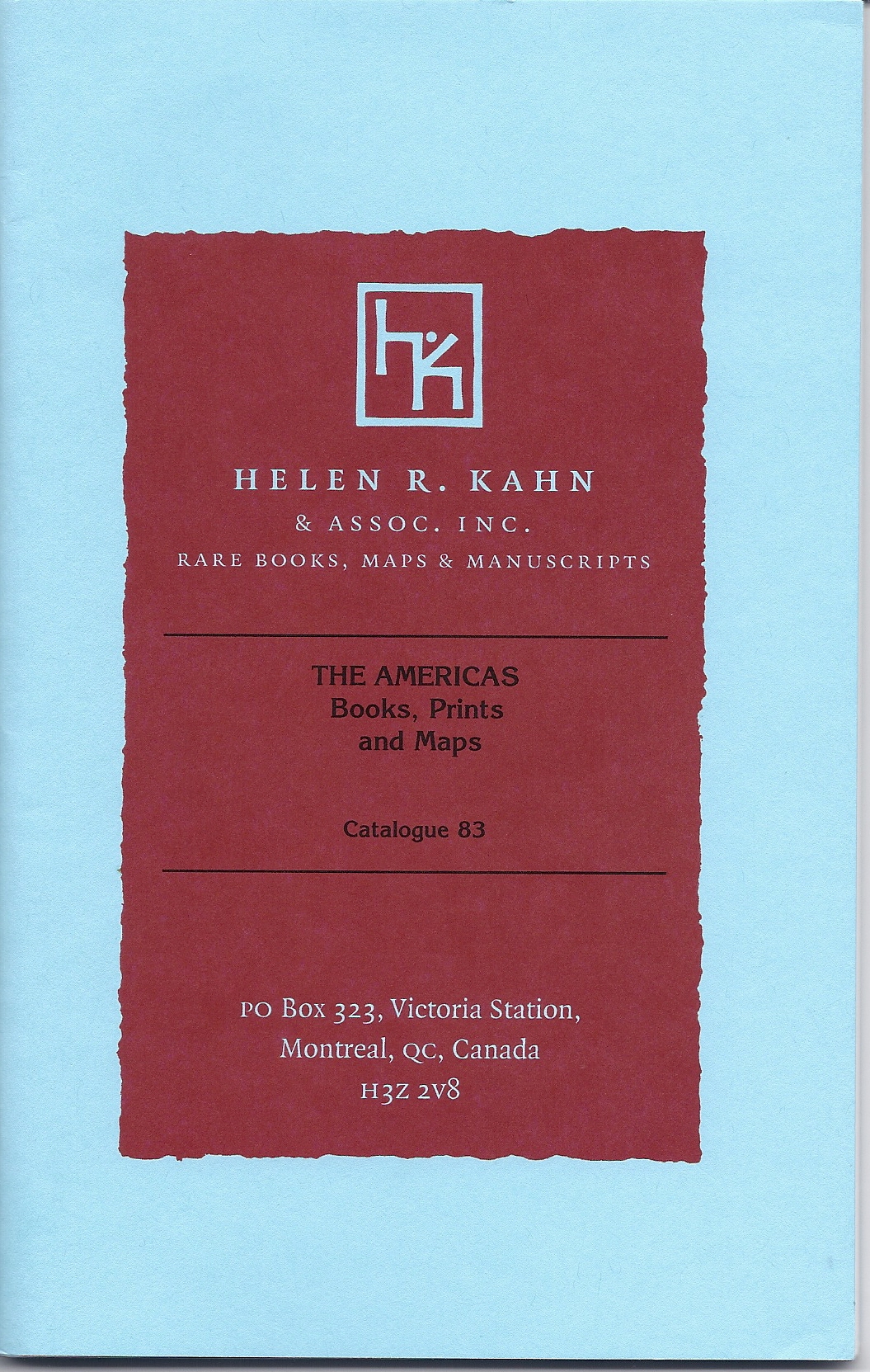 Helen R. Kahn & Associates has published Catalogue 83. The Americas, Books, Prints and Maps. Kahn specializes in works about the Americas, particularly North America and the Caribbean Islands. Being located in Montreal, and with a focus primarily on 17th through 19th century America, many of the works pertain to French America. This includes not only Canadian history but much material about the Great Lakes region and the vast territory once known as “Louisiana.” Nevertheless, Canada is a bilingual country, and so is the material offered by Helen Kahn, including many works from British writers and colonists, and their American successors. This is a catalogue that will be appreciated by those who collect Americana, particularly from the land's formative years. Here are a few of the items presented.


Pierre Francois Xavier de Charlevoix was sent to America twice by the Jesuits in the early 18th century. His job was to report on the missions, but fortunately, he provided much more about the sparsely inhabited lands whose natives his order sought to convert. Item 20 is his Histoire et Description Generale de la Nouvelle France, published in 1744, an account of his second visit. Charlevoix writes about the Indian tribes of Canada and Louisiana, some of which no longer exist, that he visited. He had hoped to find a route to the Pacific, which some of the Indians intimated was known, but the distance and obstacles were such that the chances of discovering such a route were close to nil. Priced at $6,000.


French colonization in North America effectively came to an end after their defeat in the French and Indian War. Item 113 is one of the best accounts of that period from a French point of view. Pierre Pouchot was sent to Canada as an engineer to fortify the nation's forts. He so impressed the Governor that he was put in charge of the defense of, first Fort Niagara, and then Fort Levis. He succeeded in defending neither, though the French thought Niagara impenetrable. The British were too strong, though corruption on the French side certainly did not help. Pouchot was accused of participating in the corruption, and part of the reason this book, Memoire sur la derniere guerre de l'Amerique Septentrionale, entre la France et l'Angleterre, was written was to defend himself from the charges. However, the three volume set contains far more information, including details about Canadian topography in the third volume. Published in 1781. $9,500.


In the 1750s it was the French who had to make excuses for failures in North America. Two decades later, it would be the British. Item 17 is A State of the Expedition from Canada, as laid before the House of Commons... published in 1780. The author was Lieutenant-General John Burgoyne. Burgoyne led the attempt to divide New England from the rest of the colonies during the early days of the Revolution. The plan was to drive a wedge from Canada through New York State, eventually down the Hudson River to New York City. When completed, the two halves of the colonies would be isolated from each other. It didn't quite work out as planned. Instead, Burgoyne was routed at Saratoga, and hopes for an early victory by the British were dashed. Burgoyne's forces were too small and poorly equipped for the task at hand, but nonetheless, no one likes a loser, and he was forced to defend himself from heavy criticism back home. $11,000.


Item 47 is A Voyage to the South-Sea, and along the Coasts of Chili and Peru, in the Years 1712…1714. The author, Amedee Francois Frezier, was an engineer sent by the French government to assist its ally, Spain, with fortifications in South America against the English and Spanish. Frezier also charted the coasts on behalf of his own government, and provides much information about the area. This book is noted for a plate which shows the earliest depiction of a game similar to golf. Offered is the 1717 first edition in English, which many consider the superior edition as it contains additional information, including a postscript by the noted scientist Edmond Halley, of comet fame. $4,750.