The Private Presses of Hammersmith from Sophie Schneideman Rare Books 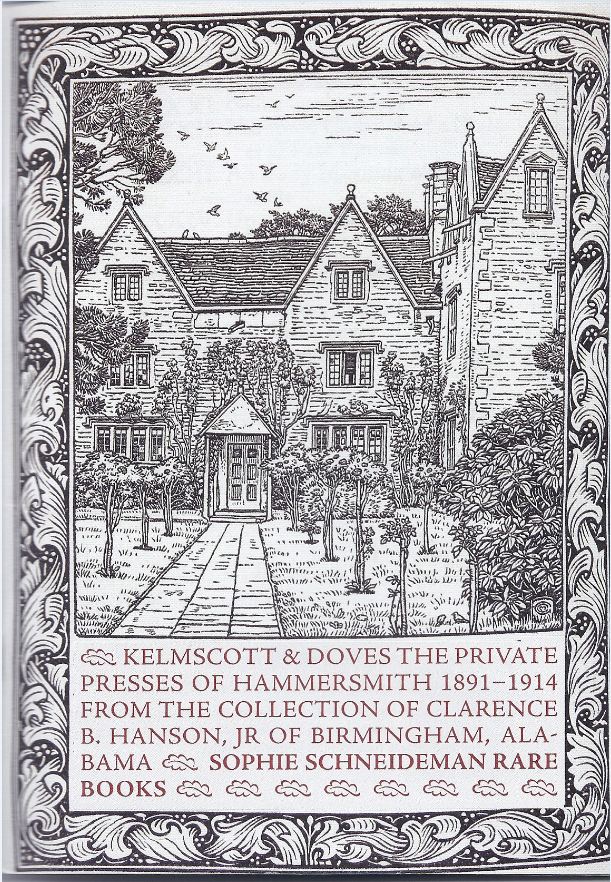 The Private Presses of Hammersmith from Sophie Schneideman Rare Books

Sophie Schneideman Rare Books has issued a catalogue of the Private Presses in Hammersmith, 1891-1914. Sophie Schneideman has participated in the book trade for two decades, including several years at Maggs Bros. prior to opening her firm. Ms. Schneideman's specialty is the “art of the book,” and one would be hard pressed to come up with any better examples of fine presses than the two from Hammersmith featured here – William Morris' Kelmscott Press, and Thomas J. Cobden-Sanderson's Doves Press. Morris virtually created the modern fine press, and his friend and associate Cobden-Sanderson, continued the art, with his own interpretation, after Morris' death.


William Morris was a multi-talented individual, artist, writer, and idealistic proponent of socialism. Late in life, he turned to one of his earliest loves – books. He set up his fine printing press in 1891, and lived but another five years. However, the output of his Kelmscott Press was surprisingly prodigious, and it remains legendary. The press continued to be operated by his associates after his death in 1896, but only to complete projects started or envisioned by Morris and wind down operations. It closed in 1898.


One of those who was friendly with Morris, a fellow socialist, and occasionally worked with him was Thomas J. Cobden-Sanderson. One such associated item is offered within this catalogue. Cobden-Sanderson opened the Doves Press in partnership with Emery Walker, yet another socialistic associate of Morris, and began publishing in 1900. While featuring fine printings as did Kelmscott, he was more focused on the artistry serving the text, rather than simply beauty. Cobden-Sanderson and Walker would design the elegant Doves type, which would be used in all of their books. The partnership dissolved in 1909, but Cobden-Sanderson and Doves continued to publish until 1916. However, a few years earlier, Cobden-Sanderson began preparing for the Press' closure in a most unusual way. He looked at the Doves works in a perfectionist sort of way, considering them at “one with the purpose of the Universe.” He could not bear the thought of his type being used in any lesser way. So, in spite of an agreement that the type would go to Walker on his death, Cobden-Sanderson began a slow late-night process of dumping the type, its punches and matrices, off the Hammersmith Bridge, into the Thames. It was the only way he could guarantee the Doves type would never be used in an inappropriate way.


There is one more name to mention in relation to this catalogue – Clarence B. Hanson, Jr. Hanson, who died in 1983, was for 35 years the publisher of The Birmingham News. That's Birmingham as in Alabama, not England. Hanson had many interests, but one of his greatest passions was collecting private press books. He did most of his collecting in the 1960s and 1970s, and the books offered in this catalogue come from his Kelmscott and Doves collections. A later catalogue will feature his Ashendene collection. Now, we will take a look at a few items from this catalogue.


Item 1 was just the second book to come off the Kelmscott Press. Poems by the Way is a collection of Morris' own poetry. Some went back many decades, although it was filled out with a poem written in the year the book was published – 1891. For many of the poems, this was their first appearance in print. Priced at £2,000 (British pounds, or roughly US $3,046).