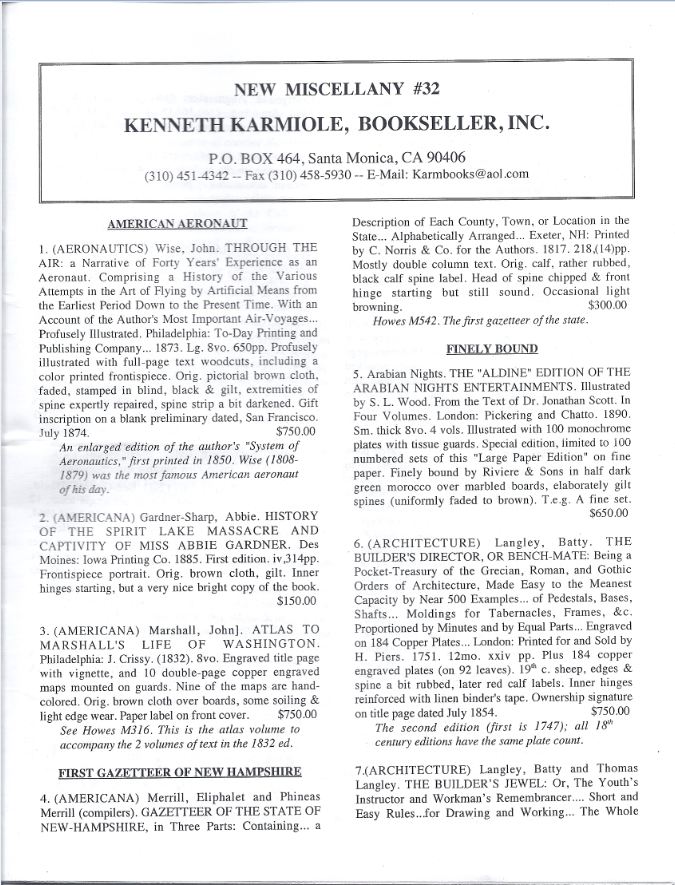 Kenneth Karmiole, Bookseller, has issued a New Miscellany #32. It is, naturally enough, a collection of varied works. They range from incunable Latin texts representing the 15th century to items published in most of our lifetimes. Most, however, are quite old. Subjects vary widely, too much so to adequately describe. So we will describe a few individual items and leave it to your imagination what else may be found.


John Wise was one of America's first aviators, long before the Brothers Wright. Naturally, he was not flying airplanes. He was a balloonist. He began flying balloons in 1835, and despite the numerous accidents, mishaps and misadventures over the years, he returned to the sky constantly throughout his life. He delivered the first air mail, though he did not reach his intended target. He was called on to use a balloon to scout enemy positions during the Civil War, but his balloon got caught in trees. It is is hard to control where those things go. Nevertheless, he made many advances, including the development of a balloon that folded into a parachute when punctured to land safely. It sort of worked. He also discovered the prevalent west to east air current, and planned to ride it all the way to Europe. That never happened. Item 1 is Wise's Through the Air: a Narrative of Forty Years' Experience as an Aeronaut, published in 1873. In 1879, at the age of 71, Wise set out from East St. Louis, never to be heard from again. Neither he nor his balloon were ever found, but the body of his passenger was discovered in Lake Michigan, likely explaining his fate. Priced at $750.


Here is an account of some other travels, but of a more typical variety: Around the World with General Grant. After the completion of his second term as President, Ulysses S. Grant embarked on a two-year worldwide tour. Along the way he met with Queen Victoria, Bismarck, the Pope, and the Emperor of Japan, among others. It was a very successful trip, and Grant was met with much respect and honor wherever he traveled. This “profusely illustrated” account was written by John Russell Young and published in 1879, the year Grant returned home. Item 98. $200.


Item 50 is R.S. Kirby's The Wonderful Scientific Museum: or, Magazine of Remarkable Characters; Including All the Curiosities of Nature and Art... This is sort of science, though perhaps more in the freak show sense. It consists of six volumes, printed from 1803-1820, “A most amazing collection...on every imaginable subject, from murders and mermaids to heroic deeds and strange characters, from water-spouts in Iceland to the Hammersmith Ghosts, from giants, midgets, and bearded ladies to monsters human and animal, and from missionaries to a man who advertised long and unsuccessfully for a wealthy wife!” $2,000.


Item 11 is a letter that provides an interesting insight into the thinking of David Ben-Gurion, a leader in Israel's independence movement and its first Prime Minister. He had received a letter from a Mrs. Berman in 1964, a year after leaving office, who must have thanked him for his contributions and related how she benefited personally. To Ben-Gurion, however, he was not providing personal favors. “...I have done nothing for you or anybody else,” he writes. “What I did all my life was merely to do my duty – that is all.” $1,000.


Item 46 is one of those incunables, a 1486 edition of Epistolae Familiares by Aeneas Sylvius Piccolomini. This includes Aeneas' serious letters. The man wasn't always so scholarly. He was a bit of a rogue as a youth. He reportedly fathered two illegitimate children, and wrote a popular risqué novel called The Tale of Two Lovers in 1444. If you remember your Gutenberg, it wouldn't have reached a very wide audience in 1444, but became popular later with the advent of printing. That may have embarrassed Aeneas a bit, as he became more serious, found a role in the Church, and just 14 years later, was named Pope - Pius II. By all accounts, he grew into his role and was one of the better Popes in an era when not all were so good. $8,500.


Item 75 is one of those religious/scientific books you still occasionally see today, but not very often. It is an attempt to reconcile Biblical events as literal history with scientific evidence. Robert Miln looked at the geologic evidence and attempted to match it with his belief in the Bible as revealed, literal truth. The title of his 1786 treatise is A Course of Physico-Theological Lectures upon the State of the World, from the Creation to the Deluge. $600.