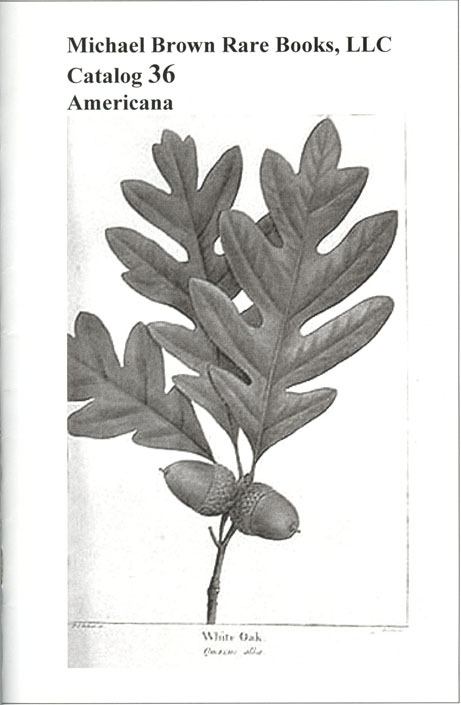 Michael Brown Rare Books of Philadelphia has just released their 36th catalogue of Americana. This is a diverse collection of unusual and unexpected material. Many of the items are letters and other one-of-a-kind manuscripts. There is likely something of interest to any Americana collector to be found within its pages. Here are a few examples.

"Truth Is Stranger Than Fiction...." starts the title of item 59, and we will continue if you're strong enough to face the truth. New Orleans As It Is: Its Manners and Customs - Morals - Fashionable Life.... So far so good, but now the rest: Profanation of the Sabbath - Prostitution - Licentiousness - Slave Markets and Slavery &c. &c. &c. By a Resident. You can see this is going to be a fun book. Almost as much fun as New Orleans itself, which, except for the slavery, retains most of these habits today. Some parts of the book tell of the less controversial aspects of this city, such as its history, the Louisiana Purchase, and its location. Here are some of the less savory sections: Kept Mistresses, Extent of Licentiousness, Regular Prostitutes, Prostitution of Wives, A Man Selling His Own Children, Slave Girls Hired As Bed Companions, Whipping of Slaves, A Woman Whipped to Death, Women Whipping on the Plantations, Chain Gangs of Women, and Depravity of Slave Holders. Why haven't they made a movie out of this book yet? Evidently the "resident" who wrote it must have done so with some trepidation as he not only chose to remain anonymous, but had the book published in Utica, New York. What do New Orleans and Utica have in common? I've been to both and I can assure you, absolutely nothing. From 1849. Priced at $2,000.

Here is a most unusual broadside, and since I can find nothing more about the supposed incident, its wording will have to suffice: PUBLIC NOTICE. Having heard that C.D. Elliott, Principal of the Nashville Female Academy, has been going about this City for several months past traducing the character of my husband, Charles Baldwyn, and thereby endeavoring to prevent his getting a living here....C.D. Elliott called him "An Ordinary Humbug," I now call upon him to come forward and prove him to be such if he can, or I will COWHIDE him as a slanderer, every time I meet him in the streets of Nashville. Charlotte Baldwyn. February 18. 1852. There are a few things we can infer from this. "Ordinary humbug" was fighting words in 1852. Charlotte Baldwyn was a loyal wife. She was also one tough lady. Perhaps a bit tougher than husband Charles? He must have been mortified when he first saw this thing posted on the street. Unfortunately, this has all been lost to history. However, we do know that Collins D. Elliott was regarded as a respected educator in his community and continued to lead the Nashville Female Academy for another nine years, departing in 1861 to serve as a Chaplain in the Confederate Army. Nowadays, of course, we would sue each other over matters like this, but I think the posting of humiliating broadsides is a far more elegant method of resolving disputes. Item 21. $650.