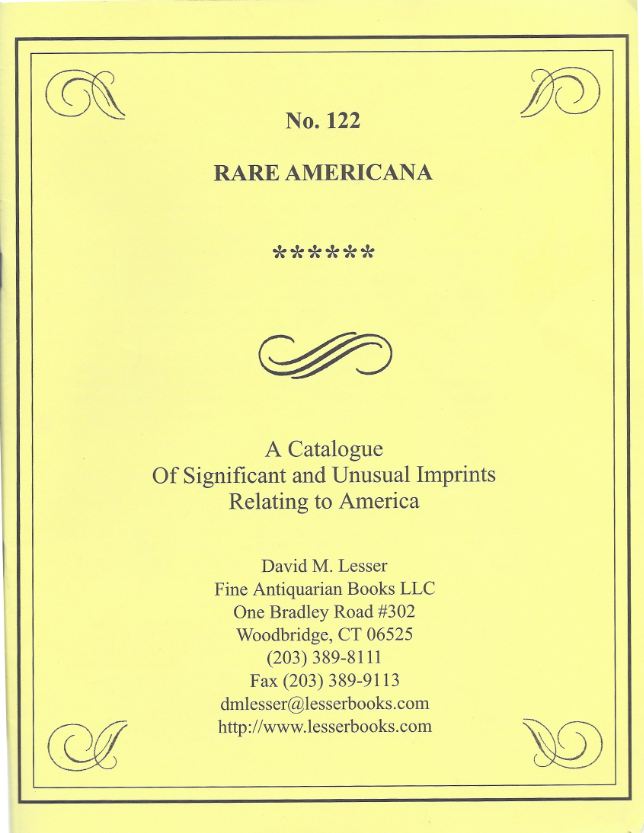 David M. Lesser Fine Antiquarian Books has issued catalogue No. 122 of Rare Americana. Lesser specializes in pamphlets and other shorter forms of paper, such as manuscript ledgers, diaries, and similar material. It is overwhelmingly 18th and 19th century in origin, and as might be expected of pamphlets, the printed items tend to deal with the issues of the day. However, you will also find an occasional book in here, though you won't find much in the way of fiction, or at least not intentionally so. Here are a few items from this latest catalogue, which includes many new acquisitions by the Connecticut bookseller.


With the all-important South Carolina primary coming up soon, it is instructive to look back at past elections in the Palmetto State. Not everyone always thought them to be honest. Item 134 comes from the Union Republican party in 1880: The Election of 1880 in South Carolina... Detailing the Frauds, Violence and Intimidation, by which South Carolina was Carried for Hancock. Winfield Scott Hancock was the Democratic nominee. The Republicans charged his party with ballot stuffing, ballot destruction, fraud and voter intimidation, among other questionable practices. Many Republicans, they claimed, were “assaulted and badly beaten,” some were “pursued with dogs, and only escaped by taking the swamp and swimming the creek near by.” As to why the Democrats would have spent so much energy on voter fraud in what was probably the safest state in the Union for the party is unclear. Perhaps the margin was so great because of the fraud? Hancock carried the state by an almost 2-1 margin, greater than in any other state, but it didn't make any difference. While Hancock carried every state in the South, and the popular vote was virtually evenly split, Republican James Garfield carried almost every state in the North, and their greater electoral votes, to easily sweep to victory. $250.


Epic poems don't have quite the following they once had, and Thomas Hedges Genin is a name few remember. Genin was a lawyer and active abolitionist in antebellum America. Genin provided us a poetic look at Napoleon's campaigns in The Napolead, in Twelve Books, published in 1833. This is all bound in one volume so don't worry about it taking up too much shelf space. Item 57. $175.


Poems about Napoleon aren't of much practical use, but here is a description of a product that many would use today were it still available: A Treatise on the Hair. Published by R.P. Hall & Co. Proprietors of Hall's Vegetable Sicilian Hair Renewer... Reuben Hall's 1866 pamphlet touts his “entirely new scientific discovery,” “scientific” evidently having a different meaning back then. Hall's hair restorer both promoted the growth of hair and the restoration of its natural color. He claimed to have obtained the formula from a poor Italian sailor, as if anyone who actually discovered a cure for baldness would be poor for long. Item 63. $175.