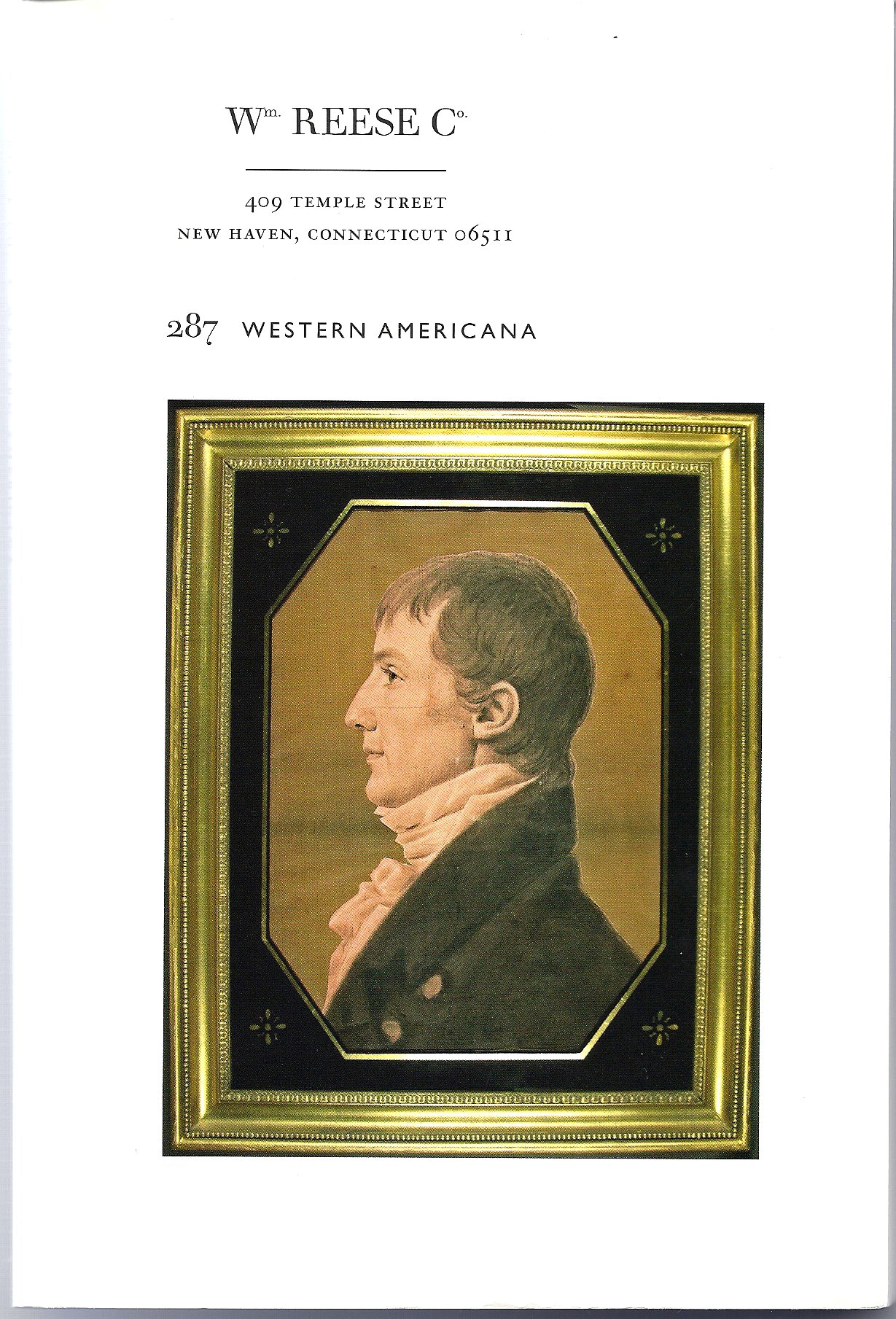 The William Reese Company has issued a catalogue of Western Americana. There are few subjects that generate as much interest, and consequently are as highly collectible, as the American West. However, this is not a catalogue filled with cowboys and Indians, gunslingers and lawmen. Sure, they make their appearances, particularly America's natives, but not in the stereotypical way we remember from childhood. These are serious looks at the Old West, from the early explorations by Lewis and Clark and those who followed, to the settlement of that vast land, and the Indian wars which enabled that massive land transfer. We even find Davy Crockett, but he is not Fess Parker in a coonskin cap, but a fighter defending the Alamo, as recounted by one of the few witnesses to survive the final battle. Here, now, are a few selections from Western Americana.

Speaking of the Alamo, most of the few who survived were women and children. One from each of those categories were Susanna Dickinson and her daughter, Angelina. Their husband/father perished in the fight. Apparently, Mexican leader Santa Anna wanted to adopt Angelina, but Mrs. Dickinson declined. There were probably hard feelings. Thirteen years later, a bill was raised in the Texas House to provide aid for the Dickinson women. This plea is contained in the Speech of Guy M. Bryan, Member for Brazoria, on a Joint Resolution for the Relief of the Infant Daughter of Susannah and Almiram Dickinson. Bryan was a nephew of the “father of Texas, Stephen F. Austin, and a veteran of the Texas Revolution. Bryan particularly wanted the legislature to raise funds for the education of Angelina, a teenager now in the year of 1849. He calls out for aid to the “christened child of the Alamo, baptised in the blood of a Travis, a Bowie, a Crockett and a Bonham... Give her what she asks, that she might be educated, and become a worthy child of the State!” Neither Bryan's fiery words nor his Texas pedigree made a difference. She was not given what she asked. Bryan's bill passed the House, but died in committee. Perhaps as a result of their stinginess, instead of becoming an educated young woman, Angelina became a drifter, with two failed marriages, and reportedly died in Galveston (or New Orleans) a courtesan. Item 2. Priced at $2,500.


It took several decades for the life of tragedy to unfold for the “child of the Alamo,” but for the men there, it took but a few hours. Item 106 is an autograph letter from James Morgan, which includes a firsthand account of the Battle of the Alamo written less than a month after it happened in 1836. Morgan was a commander in the Texas Revolution, and his letter was written in hopes of securing aid for the Texian army. Morgan was not a witness to the events within the Alamo himself. He would have been killed had he been there. However, he recounts the testimony of a witness, William Travis' slave, Joe, whose life was spared. For once, it was better to be a slave than a master. While the last moments of the famous defenders of the Alamo remain uncertain, it is generally believed that Jim Bowie was ill in bed, and was killed there. According to Joe, he got under the bed, evidently seeking protection, from where he fought to the end using his pistols and famous knife. Davy Crockett, he said, led the defenders as long as he could. “No man could have behaved with more bravery than he did.” Item 106. $75,000.


Item 66 is a rare example of the variety of book commonly known as an “Indian captivity:” A Narrative of the Captivity of Mrs. Horn, and Her Two Children, with Mrs. Harris, by the Camanche Indians, after They had Murdered Their Husbands and Travelling Companions; with a Brief Account of The Manners and Customs of that Nation of Savages... For starters, their manners must not have been very good, killing your guests not being polite behavior. The Horns were Britishers, emigrating first to New York, and then joining the Beale expedition in 1833 to settle lands along the Rio Grande at Delores, Texas. Unfortunately, Delores was not a fun place to live, and the Comanches added an element of danger to the other miseries of the place. In 1836, the Horns and others decided to leave, but with Mexican troops on the move as a result of the Texas Revolution, and Comanches prowling the area, escape was difficult. The group was surprised by the Indians, Mr. Horn and other men killed, and the rest of the family and Mrs. Harris taken off as captives. Mrs. Horn would be separated from her children, whom she would never see again, and was ransomed by traders in New Mexico in 1837. Her health damaged and unable to secure the release of her children, she traveled to Missouri, where she was interviewed for this book by its author, E.A. House. The book was published in 1839, also the year Mrs. Horn died. $16,500.