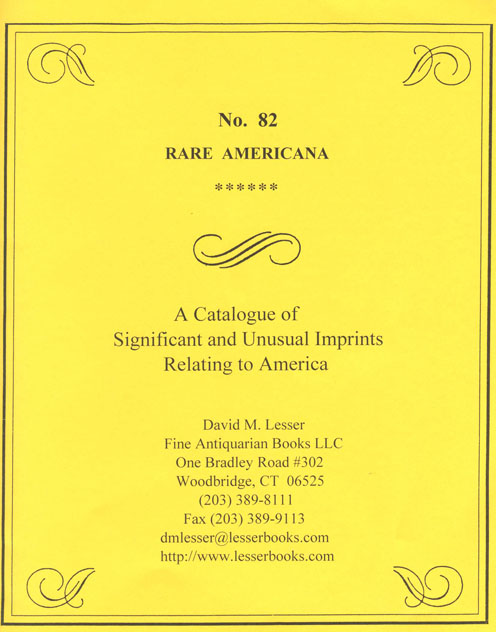 David M. Lesser Fine Antiquarian Books always gives us an interesting collection of material in the field of Americana. His catalogue 82 of "Rare Americana" is no exception. It is filled with publications that touch on the major issues of their day, which, for the most part, run from the Revolution to Reconstruction. Here are some examples.

Long before there was an interstate highway system, before the US highways, before even the Lincoln Highway, there were wagon roads. In the 1850s, the government set out to build a series of these roads as part of the opening of the west. Pacific Wagon Roads, generated by Albert Campbell, who oversaw this project on behalf of the Department of the Interior, was published as a letter from its Secretary in 1859. Included are maps of several of these roads, including the Fort Kearny and South Pass Road through Nebraska and Wyoming, and the El Paso-Fort Yuma Road from Texas through New Mexico and Arizona. Unfortunately, many of the projects would be put on hold as a result of the looming crisis, which would erupt into the Civil War (Campbell would switch to the Confederate side). Item 31. $350.

William Plumer made an impassioned plea for separation of church and state to a justice committee of the Virginia House of delegates in 1847. It was printed as The Substance of an Argument Against the Indiscriminate Incorporation of Churches and Religious Societies. His fear was that the state would inevitably favor the strongest churches. In something akin to a backhanded compliment, Plumer argues, "To me it is a source of unspeakable pleasure, that I live in a land, where I believe the rights of conscience are most solemnly guaranteed to every human being, however ill informed or perverted his conscience may be on spiritual affairs." What greater show of support for religious liberty could there be than upholding the rights of the "spiritually perverted?" Item 129. $150.

One man who was considered "spiritually perverted" by too many of his fellow countrymen was Thomas Paine. As to what his spiritual beliefs were, that is not clear, but it is clear that he had little use for much of organized religion, at least such as it was in his day. Those views would turn the writer of "Common Sense," the book that in many ways led to the American Revolution, into something of a pariah in his homeland in his final years. It is nice to see that a few decades after his death, he was finally getting some recognition for his contributions to America.