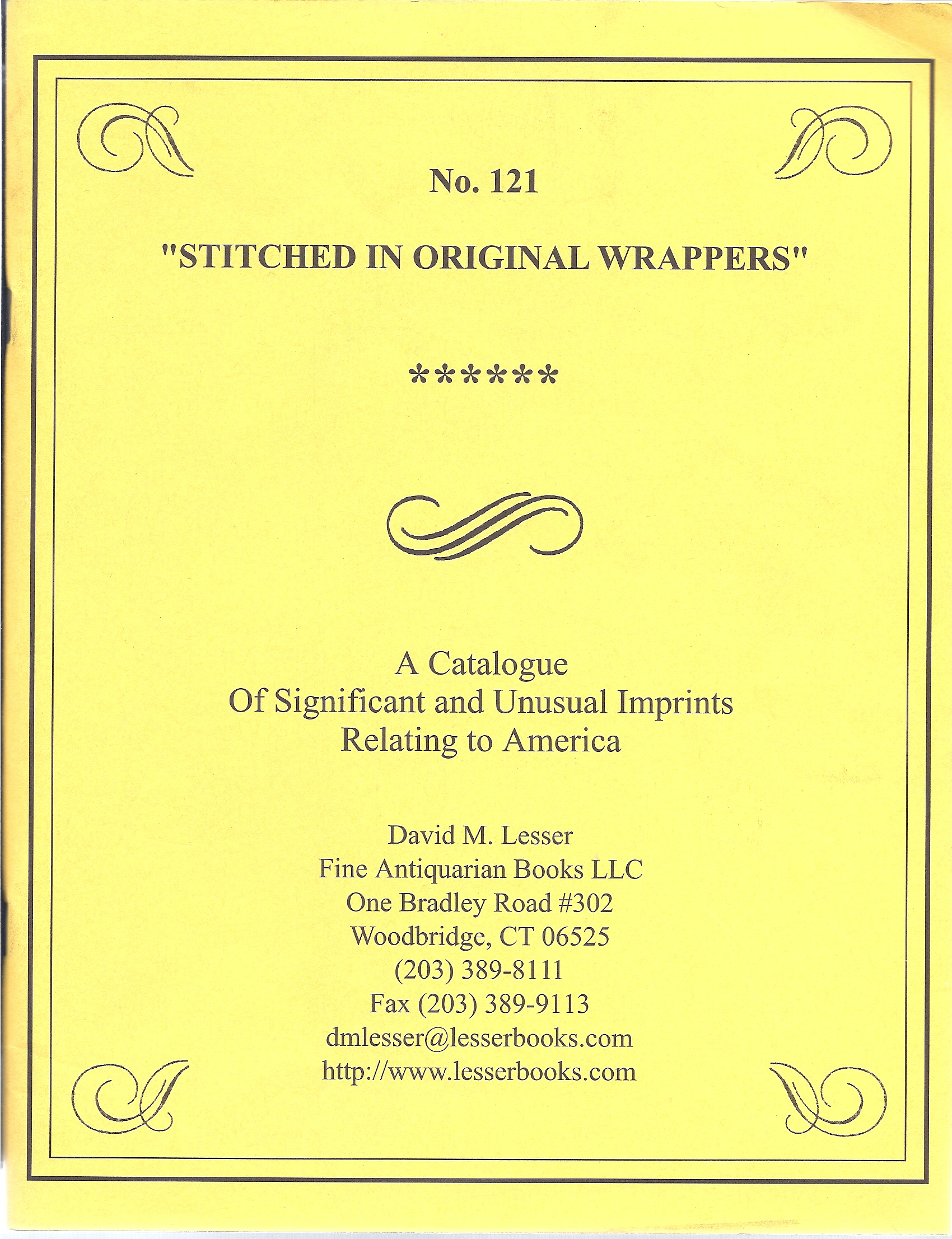 David M. Lesser Fine Antiquarian Books has released a new catalogue, and rather than just one of Americana, this one comes with the more specific title of Stitched in Original Wrappers. Lesser describes this as “the small but lively world of pamphlets stitched in their original wrappers, a condition highly esteemed by booksellers and collectors for their pleasing aesthetic qualities and unsophisticated state.” Other than the stitching, this catalogue offers the type of material we expect from David Lesser – pamphlets in the field of Americana, from the 18th and 19th centuries, with a majority printed during the period from the Revolution to the Civil War and Reconstruction. Here are a few of them.


No issue confounded the young American republic in the era between the two wars like that of slavery. A nation could not survive half slave, half free, forever. One of the most eloquent of voices for all free was that of Frederick Douglass, himself once a slave. He argued across the North for abolition, and after the war, for civil rights. Item 88 is Lectures on American Slavery, Delivered at Corinthian Hall, Rochester, N.Y., published in 1851. The passage of the Compromise of 1850, and its infliction of the Fugitive Slave Law on the North, had racheted up the calls for abolition. Says Douglass to his northern audience, slavery is “an evil of gigantic proportions,” one for which “every American citizen is responsible for its existence.” This would have been a call to action to northerners who perhaps felt that their personal lack of complicity in enforcing slavery would let them off the hook. “There can be no peace to the wicked while slavery continues in the land.” Douglass was correct. Priced at $2,500.


The end of slavery did not bring about equal rights, as item 11 attests. It is a pamphlet from The Baggage Masters' and Passenger Train Brakemen's Life Insurance Company of the United States. It covers the proceedings of this company, which was created two years earlier to “provide for the widows and children, heirs or representatives of those of our number who may lose their lives or die amid the dangers and perils of a hazardous vocation.” Not sure what the distinction is between dying and losing your life, or why baggage handling was such a dangerous vocation. In a showing that equal rights were not yet the law of the land, it specifies that membership in the organization is limited to “white Baggage Masters and Passenger Train Brakemen of the United States.” $500.


This next bit of prejudice really has to be attributed to the British, as the speaker was an English churchman, but this edition was printed in Boston, where anti-Irish sentiment was also common in 1845. This churchman's views are let loose in A Fragment on the Irish Roman Catholic Church. By the Late Rev. Sidney Smyth. Smyth did not have a high opinion of the Catholic Church, nor in the unappreciative Irish people who evidently did not recognize the beneficence of the English in attempting to liberate them from the tyranny of that Church. And now, this band of ingrates was rebelling against the Crown. Exclaims Smyth, “And this is the country which is to be Erin-go bragh'd by this shallow, vain, and irritable people into bloodshed and rebellion!” Sarcasm is not becoming, Reverend. Item 212. $150.


Item 34 recalls the arguments that led to the desegregation of schools in 1954, but this battle was waged in Massachusetts over a century earlier. Offered is the Report of the Primary School Committee, June 15, 1846, on the Petition of Sundry Colored Persons, for the Abolition of the Schools for Colored Children. This piece is accompanied by the Report of the Minority of the Committee of the Primary School Board... George Putnam and others argued that segregated schools denied black children “of those equal privileges and advantages in the public schools to which we are entitled as citizens.” He goes on that “all experience teaches that where a small and despised class are shut out from the common benefit of any public institutions of learning and confined to separate schools ...neglect ensues, abuses creep in, the standard of scholarship degenerates...” The school committee argued the basic separate but equal thesis, noting that blacks had been the ones who had requested the establishment of black schools (of course, that was when no schools, integrated or segregated, were available to black children). The black children's cause would be taken up by the noted abolitionist and future senator Charles Sumner, but to no avail. $2,500.