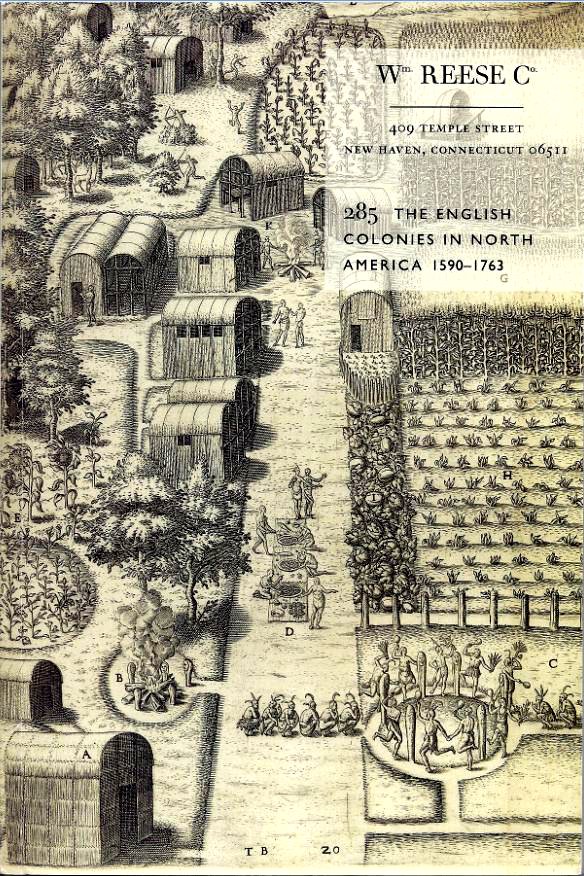 The William Reese Company has prepared a catalogue of The English Colonies in North America 1590-1763. This is a chronological presentation of works dealing primarily with what would be the Atlantic coastal states of the United States, with an occasional excursion deeper inland, or to Canada to the north. As those dates will attest, it begins long before the Pilgrims first set foot on American soil, to the doomed Roanoke colony. It ends at the high point of British-American cooperation and success, the final triumph over the French in the French and Indian War. Of course, by the next year, that relationship was already beginning to break down, and within 13 years it would be terminated completely, at least from the colonists point of view. Fortunately, we won't have to deal with any of that unpleasantness as this story ends in triumph and friendship. Here are a few of the 75 items being offered.


This author was one of the most important explorers and colonizers of North America, but his name is probably more associated with Pocahontas than anything else. This, of course, would be John Smith, who claimed the fair Indian maiden had saved his life, throwing herself upon him as he was about to be executed by her tribe. Time has cast much suspicion on this story, and perhaps as a result, the accuracy of Smith's accounts in general, though surely something went on in those early days of the Jamestown colony to connect those two and their peoples. But, that was long ago, and in 1614, Pocahontas married Jamestown settler John Rolfe, and John Smith, having left Virginia five years earlier, returned to America, but to New England, not Virginia. It was this visit that he recounts in A Description of New England: or the Observations, and Discoveries, of Captain John Smith... published in 1616. Smith visited New England twice, in 1614 and 1615, and his book became something of a guide for the Pilgrims. Smith listed Plymouth as having a good harbor and being a nice place for a settlement. On his second trip, Smith was captured by pirates and held on a French warship, where he wrote this book. If the French had realized he was writing a book that would encourage British colonization of America, which in would in turn lead to their being thrown off of the continent, they would have shot him on the spot. Item 4. Priced at $125,000.

Soon thereafter, the Pilgrims came, and they were a puritanical lot. One who knew them well in their early days was Thomas Morton, as fun loving and open as the Pilgrims were dour and intolerant. After a visit to Plymouth, he set up a small, rival colony in what is now Quincy, Massachusetts, and developed trade and friendly relations with the local Indians. Morton and his colony were the target of the most virulent abuse by his neighbors, for whom Morton represented sin incarnate. Morton got his opportunity to write about his neighbors in 1637, in this book, New English Canaan or New Canaan. It is perhaps the best account of early New England, covering its natural history, Indians (whom Morton admired), and his annoying neighbors (whom he did not). Eventually, Morton would be driven to Maine to escape their abuse, but his book remains as a testament to the shortcomings of our Pilgrim fathers. Item 7. $125,000.


Item 28 is another important account of early America, though it comes from a far more establishment source. Cotton Mather was the establishment, son and grandson of leading colonial clergymen, and who was the leading religious figure at the turn of the 18th century. He was also a pivotal player in the Salem witch trials, a horror show to which he will always be tied. Cotton Mather was no Thomas Morton. Nonetheless, he provided us with much information about the early days of the colony in Magnalia Christi Americana: or, the Ecclesiastical History of New-England, from the First Planting in the Year 1620. Unto the Year of Our Lord 1698. Despite the title, Mather tells us about far more than mere ecclesiastical matters. $14,000.


If Magnalia Christi is Mather at his best, this one is Mather at his worst: The Wonders of the Invisible World: Being an Account of the Tryals of Several Witches, Lately Executed in New-England... published in 1693 (first British edition). Actually, these women weren't witches at all, except in Mather's imagination. The logic was that spirits were spoken of in the Bible, therefore, if there are no witches, the Bible is not true, and therefore, to establish the truth of the Bible, we better find some witches. Find them they did. Nineteen of them were hanged by the good people of Salem, with Mather's encouragement. Mather would later complain about those who criticized him, though he should have been thankful he was around to respond to those criticisms, unlike the victims. Item 20. $20,000.