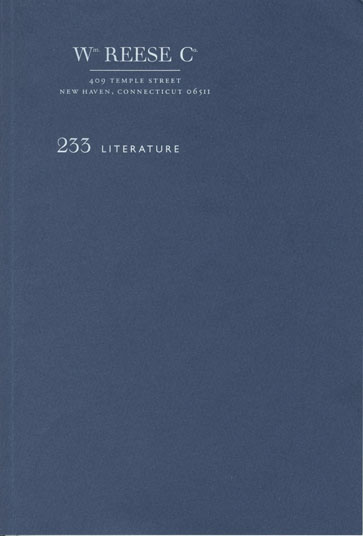 The William Reese Company has issued its catalogue number 233, and this one is different from the typical Reese catalogue we see. Most of their catalogues are focused on items of American history, with the vast majority of items predating the 20th century. Catalogue 233 is titled simply "Literature," and includes much poetry and prose from the 20th century, a few significantly older items, and a wonderful collection of filmscripts (obviously 20th century for those).

Bonnie and Clyde is undoubtedly one of the more memorable films for those who grew up in the 1960s. Warren Beatty and Faye Dunaway's portrayal of the fun-loving but nefarious duo ran from amusing to riveting in the final scene, when our "heroes" meet their fate in a firestorm of bullets. Bonnie and Clyde would probably be characterized as "light romance" today. Item 411 is an early draft of the script for this 1967 film (Reese estimates 1964). Writers David Newman and Robert Benton had finished this script in 1964, but were having a hard time finding someone interested in filming it. It would not be until 1966 that Beatty would read the script and be sold on its worth. This early script is priced at $1,750.

For something a little more amusing, what could be more fun than Mae West? She was one of the biggest stars of the 1930s, known for pushing the edge of what censors would allow. Not only was Ms. West an actress, she also wrote the scripts for several of her movies. Item 603 is a script she wrote for the Broadway play Diamond Lil. This copy, which came from Paramount studies, would have been produced sometime between 1927, when it became a successful play, and 1932, when it was turned into a movie with the title She Done Him Wrong. It launched her famous expression "why don't you come up and see me sometime?" (what she actually said was "why don't you come up sometime and see me"). The film would also launch the career of Cary Grant. Reese notes that while West's work was turned into a film and a book, the play itself, as written in this script, has apparently never been published. $1,750.