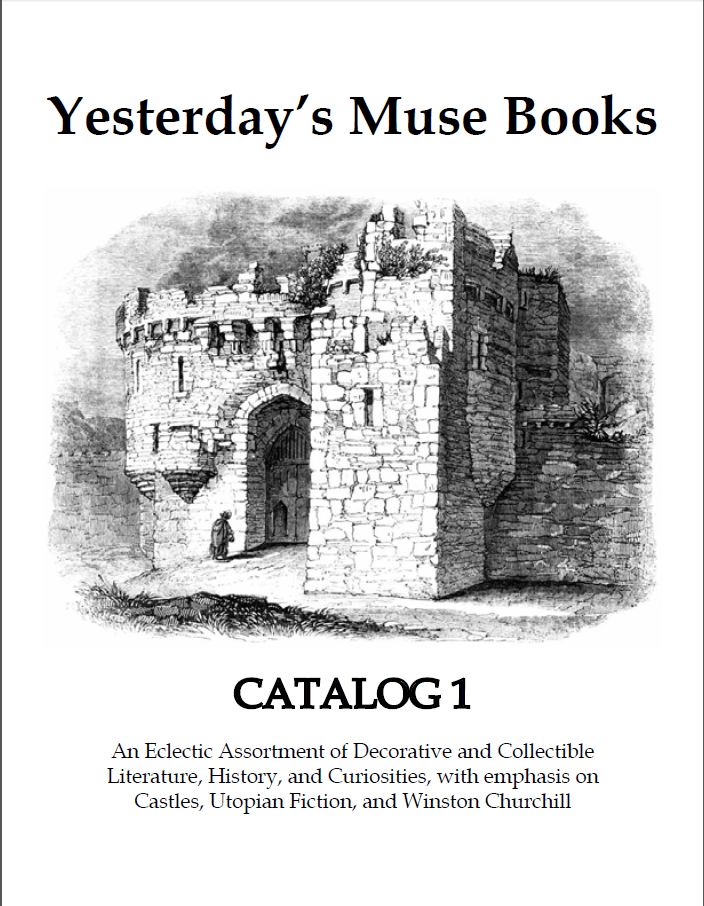 This month we have the opportunity to review the first catalogue from Yesterday's Muse Books. While this is the first catalogue for the upstate New York bookseller, the firm has been in business since 2003. In 2008, founder Jonathan Smalter opened a shop to go along with the online business. That bookstore may be found in Webster, New York, just outside of Rochester.


This first catalogue has the simple, descriptive title, Catalog 1. That title comes with a bit more explanation - An Eclectic Assortment of Decorative and Collectible Literature, History, and Curiosities, with emphasis on Castles, Utopian Fiction, and Winston Churchill. Certainly, a catalogue that combines utopian fiction with Winston Churchill is eclectic. Perhaps opposites attract. However, there is much more in this catalogue than even that title implies. Among the many other fields well represented are Americana, children's books, literature, Charles Dickens, architecture, very early books, and art. And, there is more. Here are a few selections from the first catalogue for Yesterday's Muse.


Item 11 is a look at Oregon in the days just before settlers began traveling the famed trail. The title is Ten Years in Oregon, written by Daniel Lee and Joseph Frost and published in 1844. They did not go there to settle the area, nor trade in furs. They were missionaries. Lee and his missionaries accompanied the Wyeth expedition of 1834, otherwise consisting of traders and trappers. Their aim was to convert the natives of the Northwest. Their account covers their journey and mission, and discusses their primary financier, the wealthy John Jacob Astor. Priced at $225.


F. Scott Fitzgerald published his first novel (This Side of Paradise) in 1920, and it was an immediate success. Less well known is that in the same year, he also published a collection of short stories. Item 80 is that collection of stories, Flappers and Philosophers, a third printing of the first edition. $300. A fifth printing of the first edition of This Side of Paradise is also offered (item 79. $500) as is a first edition, first state of The Great Gatsby (item 81. $2,500). The Fitzgerald items do not have dust jackets.


If you are looking for wisdom, at least in regards to political and governmental affairs, a great place for Americans to start is with the father of their country. Fortunately, George Washington wrote a lot over the course of his life. From 1834-1837, historian, scholar, Unitarian minister, and Harvard President Jared Sparks compiled 12 volumes of the first President's manuscripts, including letters, documents, messages and other written material. It was the most thorough look at Washington's writings up to that time. Sparks did receive some criticism for occasionally fixing up Washington's grammar and spelling, but the meanings were true. Item 7 is The Writings of George Washington. $850.


Who was the Portuguese Cicero? Stumped? Of course you are. His name was Jeronimo Osorio, and his name would not have been pronounced like the famous Indian Chief, since this “J” would be pronounced like an “H.” Osorio was a learned scholar, historian, churchman, and part of the court. In 1560, he was appointed Bishop of Silves, a position he held until his death in 1580. As for being the Portuguese Cicero, Osorio obtained that moniker as a result of his great fluency in Latin. Item 66 is one of those early books in this catalogue, Hieronymi Osorii Lusitani, Episcopi Silvensis, Paraphrasis in Isaiam, an edition published in 1584 (it was first published in 1579). $1,750.