Alphabets for Adults from The Veatchs Arts of the Book 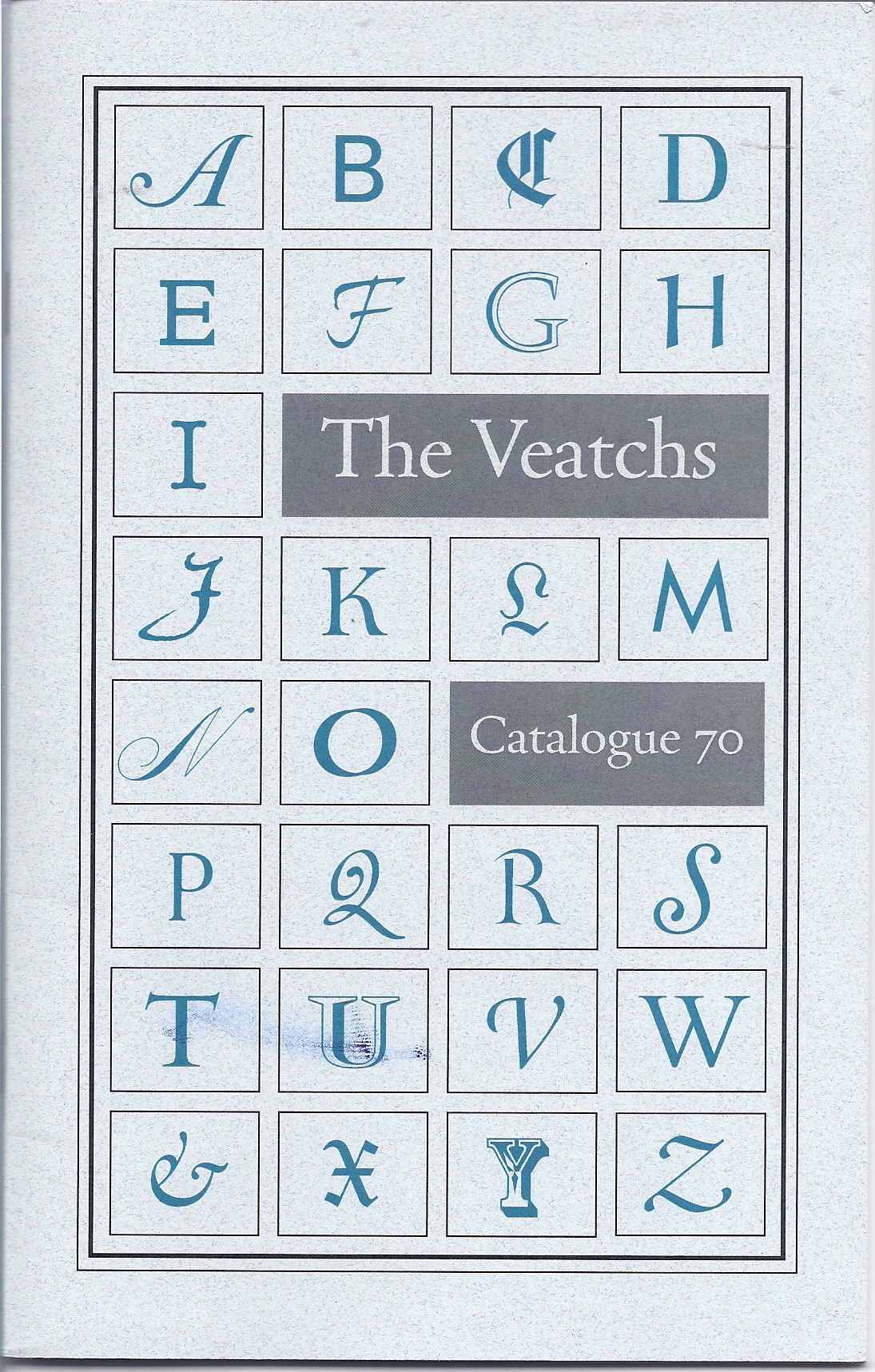 Alphabets for Adults from The Veatchs Arts of the Book

The Veatchs Arts of the Book has issued a catalogue designed for the alphabetically inclined. Their Catalogue 70, subheaded A to Z, ABCs For Adults, Ornamental Alphabets, is filled with letters, the uncommon ones like “Q,” “X,” and “Z” receiving equal billing with those like “E” and “S” that normally dominate the pages of our books. These alphabets are no child's play, and you certainly wouldn't want to let any of them get their dirty hands on these private press and fine books. In most instances, they would probably not appreciate the rhymes anyway. As the title says, these are ABCs for adults, perhaps an unusual category, but a fine one for letting one's artistic talents and imagination run free. Here, now, are some samples from these works that honor those 26 little squiggles from which every word is made.


Item 32 is Hockney's Alphabet, with drawings by the popular British artist David Hockney. It includes 24 written contributions from various well-known literary figures of the time, two decades ago (published 1992). Hockney drew 26 colorful, whimsical letters and sent them to various writers, asking them to supply a poem, story or thought for the one they were assigned. Most responded, with contributions included from the likes of John Updike, Susan Sontag, Joyce Carol Oats, William Golding, Seamus Heaney, Arthur Miller, and Erica Jong. Only Norman Mailer declined, and his refusal was such a polite “no” “that we decided to publish it as his contribution.” Priced at $2,600.


Item 25 is A Gehenna Alphabet. Gehenna was a place, probably outside the walls of Jerusalem, that for various reasons developed a bad reputation. In time it became something of a synonym for Hell or some such unpleasant place for the wicked dead. However, we don't think this is the alphabet from Hell. Gehenna was also the name sculpture-artist-printer Leonard Baskin used for his private press – Gehenna Press. Baskin created the 26 line drawings used to illustrate the letters of the alphabet, while poems and other text was supplied by Sydney Kaplan. Both Baskin and Kaplan have signed this copy. Baskin used objects beginning with the appropriate letter to form his alphabet, so, for example, an ape and an apple appear in the letter “A.” Though 110 copies were printed, Baskin was displeased with the printing quality, and many were unissued. $2,200.


This is not a foul alphabet book, but it is A Fowl Letter Book. It features 26 fowl illustrations, with each duckbill hand colored. The end papers are appropriately duckbill yellow. This alphabet book was created by Carol J. Blinn in 1989 in a signed edition of 225 copies. Item 8. $125.


Here is another of what we might call a “fowlphabet” book. It is A Fowl Alphabet, and it was published by Alan James Robinson's Cheloniidae Press in 1986. Robinson is an artist and wood engraver with a particular liking for animals. Calligraphic lettering for the animal names was provided by Suzanne Moore. The two-volume work comes with a cloth and vellum portfolio containing a signed original watercolor and a suite of wood engravings. Item 66. Published in 1986. $3,500.


This was not Robinson's first production of alphabets and animals. Earlier he created An Odd Bestiary, or, a Compendium of Instructive and Entertaining Descriptions of Animals, Culled from Five Centuries of Travelers' Accounts, Natural Histories, Zoologies, &c. By Authors Famous and Obscure, Arranged as an Abecedary. This is another work with 26 engravings from the Cheloniidae Press. It features animals from A to Z, or aardvarks to zebras. Item 13 is a copy from the deluxe edition, 1 of 50. $2,500. Item 14 is 1 of 50 from the full leather edition. $3,500.