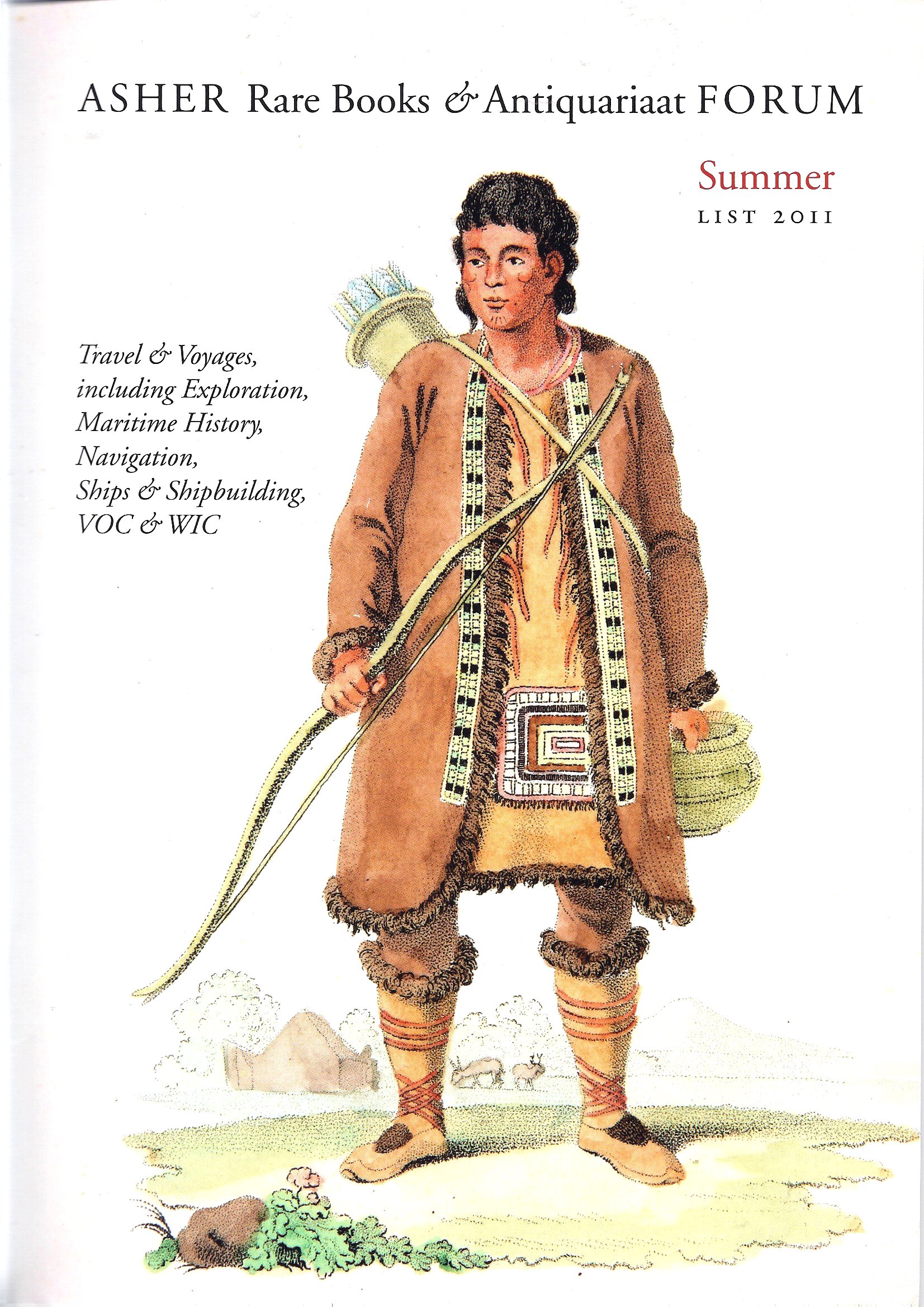 We recently received the Summer List 2011 from the combined collections of the Antiquariaat Forum and Asher Rare Books of the Netherlands. The descriptive subtitle for this collection is Travel and Voyages, including Exploration, Maritime History, Navigation, Ships and Shipbuilding, VOC and WIC. For those unfamiliar with the initials, the VOC is the Dutch abbreviation for the Dutch East India Company; WIC the abbreviation for the Dutch West India Company. Though naturally many of these books were printed in the Dutch language, there is a large selection of works in other languages, notably English and French, and they cover regions all across the globe, as the empires of those two Dutch companies once did. These are a few selections from this summer, or perhaps end of summer, catalogue.

Item 56 is the first account of what may have been the most important of all scientific voyages. It is a Sketch of the Surveying Voyages of His Majesty's Ships Adventure and Beagle, 1825-1836, by John Barrow. It was on their second voyage to South America that Charles Darwin served as naturalist on the Beagle. It would be his observations on this voyage that would lead to the publication of his theory of evolution, over two decades later. Darwin's account of what he discovered (minus his evolutionary interpretation) was first published in 1839, but Barrow's report (in the Journal of the Royal Geographical Society of London) was released in 1836. Darwin is mentioned in relation to his views on earthquake shock waves. Barrow was a major figure in the British admiralty and Geographical Society, an important proponent of Arctic exploration. The northernmost point in the United States, Point Barrow, Alaska, is named for him. Priced at €1,500 (euros, or approximately $2,016 U.S. Dollars).

Item 31 is Het leven en werken van John Williams, an 1860 Dutch adaptation by Maria Henriette Boeke of Ebenezer Prout's earlier biography of the English missionary. John Williams traveled to Polynesia in 1817 at the behest of the London Missionary Society, and stayed for 17 years, converting the natives of various small islands to Christianity. He was quite successful, and four years later, he returned from London to his island mission. This time things didn't go so well. On the island of Erromango (today part of Vanuatu), where he was unknown, he was killed and devoured by cannibals. Williams became a symbol of dedication to mission work and an inspiration for others to follow in his footsteps. While some of us might not be inspired to follow the footsteps of someone who was eaten by cannibals, this just shows how great was the devotion to their cause of 19th century missionaries. This story has a happy ending, to the extent such is possible. In 2009, Erromango islanders held a formal reconciliation ceremony and apologized to descendants of Williams who attended, including his great-great grandson. It seems Erromango islanders, now predominately Christian, have been feeling guilty about this for the past 170 years and have felt it put something of a curse over them. We don't know whether the parties shared dinner. €750 (US $1,008).

Here is a quintessentially American work one might not expect to find in the Netherlands: Narrative of an Expedition through the Upper Mississippi to Itasca Lake, the Actual Source of this River… by Henry Schoolcraft. Schoolcraft was known both as an explorer and a geologist/ethnologist, particularly noted for his familiarity with the culture of certain Indian tribes. He had participated in the Cass Expedition of 1820, which concluded Cass Lake was the river's source. However, Schoolcraft would lead a second expedition in 1832, which would find a source for the Mississippi further upstream, Lake Itasca, which is now generally considered its starting point (although several small streams lead into this lake). This book also includes information about local Indians and appendixes covering natural history of the region and the Chippewa language. Item 161. €850 (US $1,146).