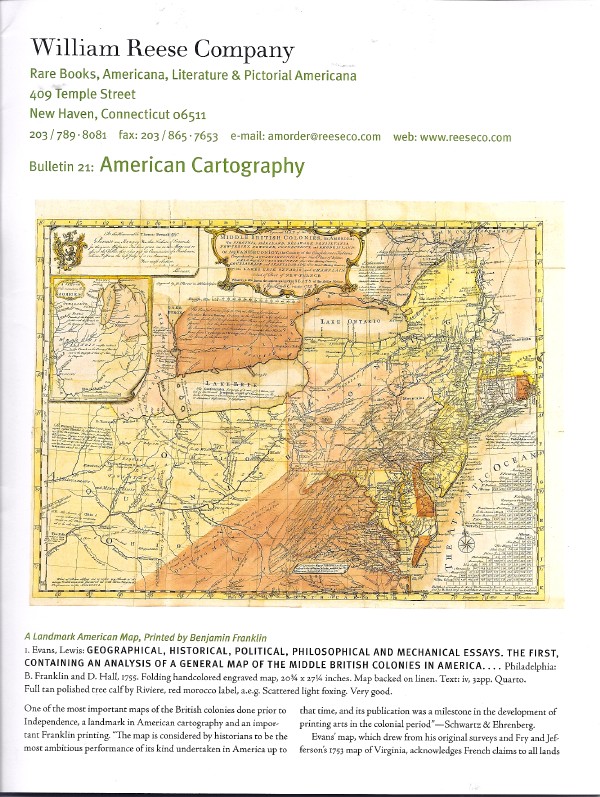 The William Reese Company recently issued their Bulletin 21:  American Cartography. It includes 32 important American maps and atlases from the 18th and 19th century. Maps are harder to explain in words than books, but we will try to present a reasonable description of some of the items found in this collection. These maps present a view of America, the United States in particular, as it formed from the original 13 colonies, and grew until it eventually reached the shores of the Pacific.

Item 1 (seen on this catalogue's cover) is the Lewis Evans' map of Colonial America, printed at the press of Benjamin Franklin in Philadelphia. This is the first issue from 1755. The map was sufficiently popular that there would be 18 editions through 1814, though the delineations of territories would vastly change over the years. The text accompanying the map provides one of the earlier descriptions of Ohio, still backcountry at this early time. Priced at $280,000.

When the British went to war with their rebellious colonists in 1776, many officers carried this book in their pockets. It is the American Military Pocket Atlas, published in 1776 by Robert Sayer and John Bennet. Also known as the "Holster Atlas," as it was bit large for a typical pocket and so was often placed in a holster, it contained 6 engraved maps, hand-colored in outline. The maps are of North America and the West Indies, designed to help the British officers find their way as they battled the colonists. Item 10. $32,500.

By the time this next map was published, British officers no longer had a need for that atlas of America. Item 16 is Sebastian Bauman's map of the battle at Yorktown, created shortly after the American victory convinced the British to abandon the cause. Within three days of the British surrender, Bauman, an American artillery officer, gained access to the site, which he carefully surveyed for his battle map. He spent six days surveying the battlefield, making his map, which he then sent to Philadelphia to be engraved and printed. Reese describes this first battle map available to the American public as a "legendary rarity." $250,000.

Three years later (1785), William Faden would publish his map of the new nation won on the battlefields of Yorktown and elsewhere:  The United States of North America with the British & Spanish Territories According to the Treaty of 1784. The United States runs from Maine (still part of Massachusetts at the time) to Georgia, with its western boundary the Mississippi. Canada remained with the British, the Floridas and land west of the Mississippi with Spain. However, we were still almost half a century away from discovering the headwaters of the Mississippi, so the boundary becomes uncertain in the Northwest, with a narrow arm extending west between Canada and Spanish Louisiana, as it was believed the Mississippi turned in a more westerly direction. Item 17. $18,500.