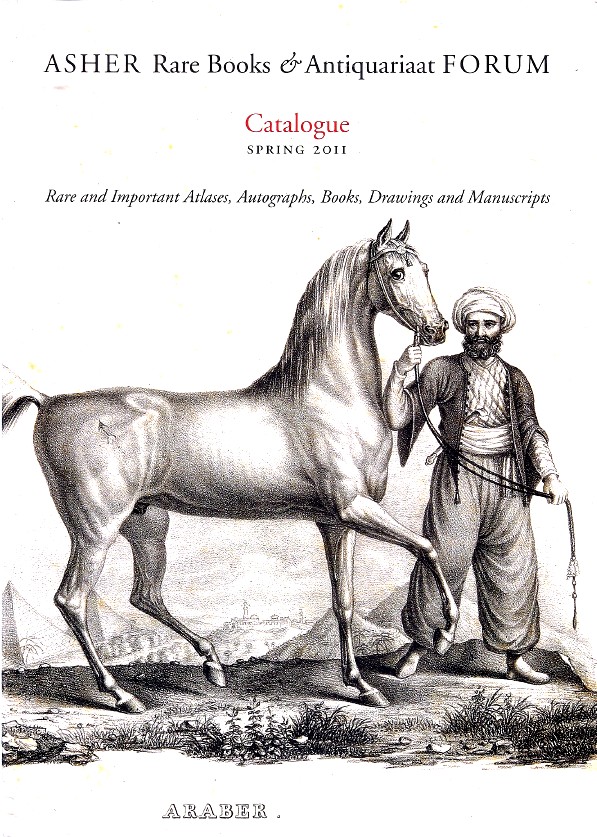 The Antiquariaat Forum and Asher Rare Books have offered a catalogue of Rare and Important Atlases, Autographs, Books, Drawings and Manuscripts. We are a little behind in receiving this catalogue from the Netherlands, but that only serves to make the antiquarian works a few months older. Offered is a variety of material hard to pigeonhole, but certainly an interesting mix of significant material. Despite the location of the booksellers, there is material appropriate for not only European collections, but those of America, both north and south, Australia, and there are a few items from the Orient. Now, here are some samples from this catalogue.

Item 15 presents a look at Louisiana shortly before the Louisiana Purchase: Vue de la Colonie Espagnole du Mississipi, ou des Provinces de Louisiane et Floride Occidentale, En l'annee 1802. The work has been attributed to Pierre Louis Berquin-Duvallon, about whom not much is known. He had been a planter in Santo Domingo who was forced to flee during the Haitian slave revolt. He went to Baltimore, and then on to New Orleans, still a Spanish possession at the time. He stayed there from 1799-1802, a year before the Purchase. Streeter describes the work as "an entertaining and gossipy first-hand picture of life in New Orleans." However, the author also describes the natural features and commerce of Louisiana and West Florida, and included two maps, one that shows the Mississippi and goes as far north as the Great Lakes. Priced at €3,950 (euros, or about $5,657 in U.S. currency).

Item 54 was a massive, 20-year undertaking, the greatest of encyclopedias - Denis Diderot's great Encyclopedie. While Diderot provided much of the material for this work of science, arts and letters, he called on many of the great names of 18th century France to contribute sections. It contains 71,818 entries from more than 200 great minds of the era. There are over 22,000 pages, 2,796 engraved plates. This set includes the Supplement and Analytic Tables. While primarily an accounting of then modern civilization, the democratic ideals espoused by the Encyclopedie would prove to be an inspiration for the later French Revolution. €75,000 (US $106,259).

By the time this book was published in 1806, Sweden's glory years as a military leader were almost a century past, but at one time, the now peaceful Scandinavian nation was a major European military power. Item 217 is a book of engravings by Anders Skjoldebrand of century and one-half year old drawings and paintings by Count Erik Dahlberg and Johann Lembke from Sweden's war in 1655-58 against Poland and Denmark, under the leadership of King Charles X Gustav. The war was something of a standoff, though Sweden had to match up against several nations and their allies. The Swedish were incessantly at war at the time, much like the British and French, and frequently expanded their holdings to neighboring lands. It would not be until the early 18th century that Peter the Great would defeat the Swedes and permanently remove them from the list of major military powers. €5,500 (US $7,825).

There was great inhumanity by man towards man centuries ago, even more than there is today. Yet always, there were voices that spoke out, against the odds, for standards that would one day come to be expected. Item 182 is Two Voyages to New South Wales and Van Diemen's Land, with a description of the present condition of that interesting colony: including facts and observations relative to the state and management of convicts of both sexes. Author Thomas Reid served as the surgeon on two British "transportation" voyages to Australia. At the turn of the 19th century, England was shipping many convicts off to Australia as a way to be rid of them. Conditions on the ships were abominable, and life not all that much better after they arrived in the new colony. Reid traveled on two transportations, one for men, one for women, and wrote about the deplorable conditions the convicts were forced to endure. His book was published in 1822. €1,250 (US $1,755).